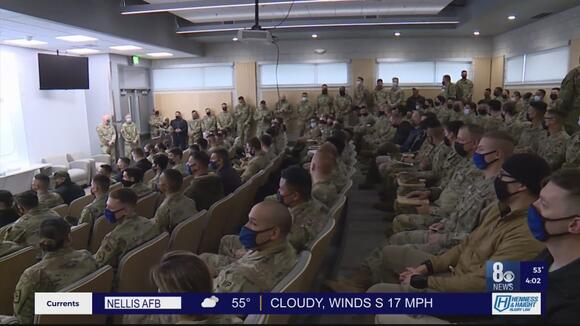 A few hundred thousand people are expected for the fireworks show.

Gov. Steve Sisolak has called in the Nevada National Guard to help out.

It’s not a new assignment.

Roughly 220 guardsmen and women will ring in the New Year on the Las Vegas Strip and in downtown.

They’ll be here mainly for support, beefing up the security presence.

As Las Vegas prepares for New Year’s Eve celebrations it’s globally known for, 8 News Now had a look inside a briefing.

“We are ambassadors for the State of Nevada for everybody here celebrating.”

Troops will assist Metro police and emergency management as the clock nears midnight.

Governor Steve Sisolak stopped by to greet the troops.

“To have the guard there is absolutely vital,” Sisolak said.

He says crowds will likely be smaller than pre-pandemic years. Still — officials are preparing for a couple hundred thousand people.

Las Vegas is moving forward with 2022 celebrations when other cities are scaling back due to COVID.

“It’s a tough thing to balance the economy and safety and people. We’re trying to keep people as safe as we can and the best way to do that is to get vaccinated and boosted. Same time we need to keep our economy moving and these hotel rooms filled so people can work,” Sisolak said.

It’s been a busy year for the National Guard — now a common sight during the pandemic.

“From the pandemic, to helping with PPE, from helping to wildfires,” said Maj. Gen. Ondra Berry of the Nevada National Guard. “For them, in terms of preparation, this is something they’re doing on a regular basis. it’s just more you’re in a different environment. This is more being in the frontline. Making citizens okay. Watching for any potential threats out there.”

Resorts World is one of the new launching pads for the fireworks show.

The guard is working with Metro police to determine where to post up.

We know out of the 220 troops, about 40 of them will be stationed at UMC and Sunrise Hospital.

For the first time in the history of what now is Harry Reid International Airport, more than 5 million passengers flew in and out of the facility in a single month.
LAS VEGAS, NV・19 HOURS AGO
8 News Now

Sunrise Hospital and Medical Center has had 122 cases involving the "superbug" that is being monitored by state health officials.
LAS VEGAS, NV・2 DAYS AGO
8 News Now

COVID-19 hospitalizations in Clark County jumped by more than 15% over the past week as cases continue to increase during the holiday season.
CLARK COUNTY, NV・1 DAY AGO
8 News Now

Las Vegas(KLAS)-What started as a local nonprofit a decade ago is now bringing smiles to children in hospitals across the nation. This week, Win-Win is celebrating its tenth anniversary. Kendall Tenney is joined by founder Jeff Civilico and one of the outstanding performers who gives his time to Win-Win, magician Tim Gabrielson.
LAS VEGAS, NV・19 HOURS AGO
8 News Now

Fireworks by Grucci has long history of lighting up skies, including holidays in Las Vegas

The company set to light the sky over the Strip on New Year's Eve has been creating pyrotechnic spectacles since the 1850s.
LAS VEGAS, NV・20 HOURS AGO
8 News Now

Deck The Halls With Hops And Barley

Las Vegas(KLAS)-Deck the hall with Hops and Barley. The Nevada Craft Brewers Association is presenting ‘Brew Festivus’ a week from Saturday at Downtown Summerlin. It all benefits a great cause and Kendall Tenney joins the president of NCBA and owner of Crafthaus, Wyndee Forrest, for more.
LAS VEGAS, NV・1 DAY AGO
8 News Now

Perspective is needed when thinking and talking about the future of the marinas and boat launches at Lake Mead. For that perspective, picture the Statue of Liberty on the Las Vegas Strip, Lake Mead has dropped more than its height. Over the last 38 years, Lake Mead's water level has dropped around 170 feet, currently at 1,032' above sea level. This is only 2.3' higher than last summer's lowest level. Another way to have perspective on the water loss is to watch time-lapse animations showing the water receding at the affected marinas and boat launches.
LAS VEGAS, NV・21 HOURS AGO
8 News Now

Lake Mead, located next to America's adult playground of Las Vegas, has long been an escape from the sweltering summer heat for locals and tourists. But what if access to the lake changes? It's going to happen sooner or later because of lowering lake levels. Now the National Park Service (NPS) has published several options it is considering that will be the path forward for "sustainable low water access" that benefits people, animals, and the environment.
LAS VEGAS, NV・2 DAYS AGO
8 News Now

Las Vegas(KLAS)-If you’re looking for a new place to escape during this holiday season, Travel Expert- Sarah Dandashy shares all the destinations with us.
LAS VEGAS, NV・19 HOURS AGO
8 News Now

The man accused of evading police Wednesday by driving on curbs and sidewalks near and on the Las Vegas Strip, nearly colliding with tourists and officers, sparked a fire by revving his tires in a busy intersection, documents the 8 News Now Investigators obtained said.
LAS VEGAS, NV・22 HOURS AGO
8 News Now

The location where police said a man murdered his neighbor in a dispute over a parking spot is across the street from the home where investigators suspect a man killed a 22-year-old woman and his father then helped him move the body.
LAS VEGAS, NV・2 DAYS AGO
8 News Now

Las Vegas(KLAS)-With the hustle and bustle of the holiday season, it’s easy to let healthy habits fall by the wayside. Registered dietitian Mia Syn has tips on how to stay on top of your wellness all season long.
LAS VEGAS, NV・19 HOURS AGO
8 News Now

The average daily rate for hotel rooms hit a record $209.89 in October and weekend occupancy was at 94%, according to figures released Tuesday.
LAS VEGAS, NV・2 DAYS AGO
8 News Now

A former University Medical Center nurse has filed a federal lawsuit against the hospital after she said she was fired for not getting a COVID-19 vaccine due to her Pagan beliefs, documents filed in court Tuesday said.
LAS VEGAS, NV・2 DAYS AGO
8 News Now

It's been headaches and lengthy bills for Las Vegas resident, Merrilou Thomas, 88, after she was told her plumbing system needed to be upgraded earlier this year.
LAS VEGAS, NV・2 DAYS AGO
8 News Now

Las Vegas(KLAS)-There’s a new dog in town, and it’s the first of its kind in the valley. Roqui Theus takes us inside “BrewDog” Las Vegas for a tour of the first carbon-negative bar in the city before its grand opening this weekend.
LAS VEGAS, NV・1 DAY AGO
8 News Now

Santa Jam Is Coming To Town

Las Vegas(KLAS)-A great concert coming up this weekend benefits a great cause. Santa Jam is for this coming Sunday at Pearl Theater inside Palms Casino Resort. Kendall Tenney is joined by a familiar voice from 95.5 The Bull.. Mo Joe Roberts to tell us more.
LAS VEGAS, NV・1 DAY AGO
8 News Now