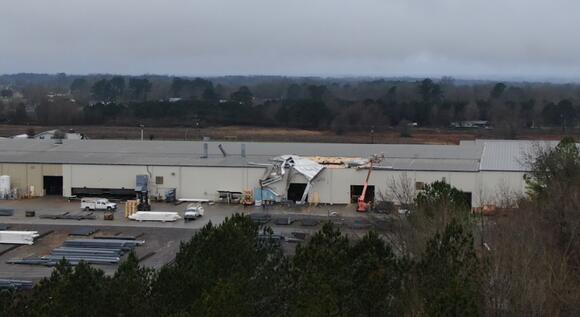 RAINSVILLE, Ala. – Luckily, no injuries were reported from a confirmed EF-1 tornado that damaged parts of Rainsville, but there was damage to be seen to power lines, trees, businesses, and even homes.

Kenneth Wooten and his family have lived in Rainsville for more than 50 years. He says they’ve made it through damaging winds in the past, but this hit was the closest to home yet.

“It was over the house. It literally was sucking up on the house. My family got into the downstairs bathroom, and I dove under the pool table. when it was coming over, it was terrible,” Wooten said.

He expected to walk upstairs and see the roof of his house torn off. Instead, the roof of a recently purchased 20×30 foot weather shed for his RV outback was strewn across his yard, flying up and over his own home and even some landing across the street at the Bluescope Steel plant.

The plant employees were also running for safety.

“We have a system there that alerts with storm and weather and all that. Everybody went to the shelter and waited it out,” employee Alvin Matthews said. “The building, it was very shaky. You could tell there was a tornado on top of us. It was pretty scary at the time.”

No one was injured at the plant, but Bluescope is working at about 90% capacity after getting damage to their roof and breakroom.

“We already have repairs underway. Our builder’s on-site already tearing some stuff off and redoing it — our break room — it had sucked the door open, sucked some tiles out so we’re in the process of repairing that as well. We’re going to temporarily fix our roof and then we’re going to fix it permanently when we can assess the damage,” Operations Manager David Volk said.

By early next week, Volk said he expects they’ll be repaired enough to return to full-capacity work.

In the meantime, those in the community are helping each other patch things up too.

The Rainsville police department says it’s already seen a number of people stepping up to help their neighbors.

Police say for anyone wanting to help with donations, to drop them off at the farmers market off Ledbetter Lane, or reach out to the Dekalb County EMA at 256-845-8569.

On Tuesday a potent storm system tracked through the region leading to a severe weather outbreak across the South. Here in the Tennessee Valley, the main impacts we saw were heavy rain and damaging winds. These The environment areas south of north Alabama was more favorable for rotating thunderstorms. Across Louisiana, Mississippi, and Alabama numerous […]
ALABAMA STATE・17 HOURS AGO
WHNT News 19

The positions range from delivery and retail positions located in Huntsville, the Shoals and more.
ATHENS, AL・8 HOURS AGO
WHNT News 19

Christmas is coming to Ditto Landing

A new holiday tradition is getting started in South Huntsville! Christmas is coming to the river at Ditto Landing with three weeks of holiday celebrations.
HUNTSVILLE, AL・22 HOURS AGO
WHNT News 19

Portions of Pratt Avenue to close for months during drainage installation

The City of Huntsville said the crews will be present starting at 9 a.m. on Wednesday, November 30.
HUNTSVILLE, AL・1 DAY AGO
WHNT News 19

Residents of a Madison home will be displaced after a lightning strike started a fire during the overnight storms, according to fire officials.
MADISON, AL・1 DAY AGO
WHNT News 19

The Whataburger in Madison has finally opened, but not its doors - just its double drive-thru.
MADISON, AL・2 DAYS AGO
WHNT News 19

Police: 1 person detained after van stolen from business in Huntsville

A person was taken into custody on University Drive in connection with a stolen vehicle investigation.
HUNTSVILLE, AL・23 HOURS AGO
WHNT News 19

Police say a man led them on a chase for nearly 24 hours over multiple counties on Sunday.
MADISON COUNTY, AL・1 DAY AGO
WHNT News 19

The names of two people killed in a crash in Boaz on Tuesday night have been released.
BOAZ, AL・1 DAY AGO
WHNT News 19

New officers and pay raises are on their way for the Huntsville Police Department.
HUNTSVILLE, AL・16 HOURS AGO
WHNT News 19

A second man has been arrested and charged with attempted murder in connection to a shooting that happened in Huntsville two months ago, according to police.
HUNTSVILLE, AL・4 HOURS AGO
WHNT News 19

An arrest was made in connection to a robbery in the Holly Pond area in Cullman.
CULLMAN, AL・1 DAY AGO
WHNT News 19

Marshall County Animal Advocates need your help this Giving Tuesday. The nonprofit is seeking donations, which will help them continue to serve pets and their owners.
MARSHALL COUNTY, AL・2 DAYS AGO
WHNT News 19

A 23-year-old Huntsville man was arrested in Birmingham and charged with attempted murder in connection to a shooting that happened last month.
HUNTSVILLE, AL・1 DAY AGO