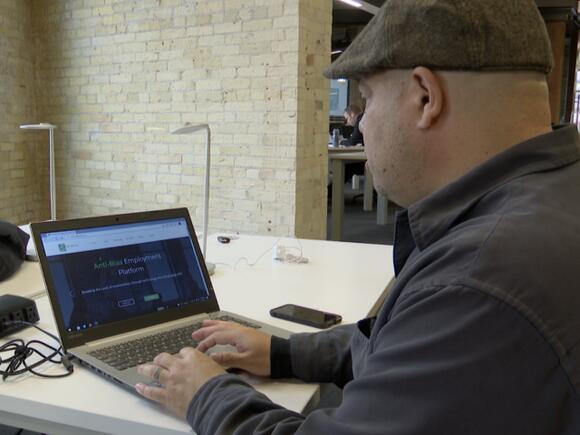 A new organization in Milwaukee is connecting formerly incarcerated people to jobs.

The Way Out was started by Eli Rivera and Ruben Gaona. Both men grew up in Milwaukee and both have spent time in prison.

"I began manufacturing marijuana in my early 20s and ended up going to prison for that," Rivera said.

But when Rivera got out, he said he was one of the lucky ones who was able to find work. He heard stories of other men who couldn't find jobs and ended back behind bars.

Although employment has been found to reduce recidivism, according to the Brookings Institution, only 55% of formerly incarcerated people find jobs within their first year of release.

Years later, Rivera's own experience and the stories he heard from others inspired him to start The Way Out with Gaona. 2019 was when the idea started taking shape, 2020 was about building the organization, and 2021 was the first full year of organization up and running.

"This is really a golden opportunity for us to prove how valuable we can be to the workforce, those of us that have been justice impacted," Rivera said.

So far, The Way Out has connected over two dozen formerly incarcerated, or justice impacted job seekers, with employment. Rivera said the goal is to "get justice impacted persons in front of employers by removing work history, their name, their zip code. Anything that may cause implicit or otherwise a bias on behalf of the employer."

One of those people is Toran Brooks.

Brooks said he began getting in illegal activities at a young age.

He was released in March of 2021 after 24 years into his sentence. He described the first half of his time in prison as "rocky."

"It was an adjustment period for my family, and then I also had to deal with my conscious for the acts that I did," Brooks said.

But, eventually he realized he needed to start thinking about the day he would be released and what he would do with his future.

"When they released me, I wanted to have as much knowledge and as many trades under my belt as possible. During my incarceration I picked up several trades. Everything from welding, to dog grooming, to dog training, to culinary arts," Brooks said.

And some of those skills ended up landing him a job after he connected with The Way Out during an event held by EXPO (Ex-incarcerated People Organizing).

In less than a year Brooks went from being in prison to being an Operations Manager at Dogtopia, thanks to the connections made by The Way Out.

"I'm a huge dog lover, that's my passion," Brooks said when talking about his job at the dog daycare facility.

At Dogtopia Brooks does everything from training, grooming and supervising the dogs. The Way Out continues to support and stay in touch with Brooks through the organization's mobile app "My Way Out."

The organization and the app also help connect employees with need social services to make sure they're able to be successful in their jobs.

"We want to make sure that before we find them employment, they're not worried about housing or healthcare or transportation or any other issue," Rivera said.

Just impacted job seekers can start by heading to The Way Out's website to fill out an on-boarding application. From there, someone from The Way Out will reach out. Employers can also reach out to the organization about getting connected to potential employees.

American Family Insurance is selling the downtown Milwaukee building it bought for $9.6 million with the intention of turning it into a new corporate office.
MILWAUKEE, WI・2 DAYS AGO
TMJ4 News

Gurda writes in his monthly Milwaukee Journal Sentinel column on Thursday that for 29 years, he has used the space to share the history of Brew City and build "bridges between past and present."
MILWAUKEE, WI・1 DAY AGO
TMJ4 News

As Waukesha gets ready to welcome back families for the return of the Christmas parade, some people will be joining in for the first time, not just from the area but from around the world.
WAUKESHA, WI・5 HOURS AGO
TMJ4 News

We are still working to learn more about what happened in a Milwaukee neighborhood where police say a 10-year-old boy shot and killed his mother inside their home.
MILWAUKEE, WI・1 DAY AGO
TMJ4 News

TMJ4 News is celebrating 75 years of storytelling across Milwaukee, Wisconsin, and the world. TMJ4 hit the airwaves on Dec. 3, 1947.
MILWAUKEE, WI・9 HOURS AGO
TMJ4 News

In-Depth: When and why Wisconsin law allows children to be charged as adults

A 10-year-old Milwaukee boy is being charged in adult court for allegedly shooting and killing his mother. Court records show he faces up to 60 years behind bars if convicted.
WISCONSIN STATE・2 DAYS AGO
TMJ4 News

Waukesha feeling a wide range of emotions ahead of Sunday's parade

Students in the Waukesha South High School band, and many of their parents, have been working around the clock to make sure their float is perfect.
WAUKESHA, WI・4 HOURS AGO
TMJ4 News

Turning pain into purpose. That's what Sheri and Aaron Sparks are doing as they prepare to grant eight children's wishes this holiday season in memory of their son Jackson.
WAUKESHA, WI・4 HOURS AGO
TMJ4 News

Another pedestrian death on Brady Street; no movement on pedestrianizing

Since September, Brady Street has been the deadliest road in Milwaukee for pedestrians. The street, well known for its nightlife and vibrancy, has claimed the lives of three people.
MILWAUKEE, WI・1 DAY AGO
TMJ4 News

The impact reckless driving has on Milwaukee County bus drivers

TMJ4's Ryan Jenkins went for a ride with an MCTS instructor who shared the impacts reckless driving has on a system that gives more than 14 Million rides on Milwaukee County streets per year.
5 HOURS AGO
TMJ4 News

Ahead of the Waukesha Christmas Parade this Sunday, TMJ4 has been introducing you to some of the people trying to make it special, safe, and uplifting for the community.
WAUKESHA, WI・1 DAY AGO
TMJ4 News

Red Elephant Chocolates made it way on campus, where students and chocolatiers make, brand and sell these delicious treats and get real-world experience along with class credit.
MEQUON, WI・1 DAY AGO
TMJ4 News

Home 4 The Holidays: How you can help stop hunger in SE Wisconsin

Every donation you make during the Home 4 the Holidays campaign helps make sure families and seniors in our area have enough to eat during the holiday season.
MILWAUKEE, WI・1 DAY AGO
TMJ4 News

After a Milwaukee native and her daughter drown off the shores of the U.S. Virgin Islands just days after Thanksgiving, students at a local school gather to pray for healing and support.
MILWAUKEE, WI・8 HOURS AGO
TMJ4 News

It all started with a family nickname. When Maria Knier was a child, “Bezert” was a name coined by her father for little kids and little creatures. Maria decided to bring the word to life by writing
MILWAUKEE, WI・6 HOURS AGO
TMJ4 News

Dr. Margolis noted that the flu hitting early with RSV and coinciding with COVID-19 is challenging hospital staff and putting people of all ages at risk.
MILWAUKEE, WI・4 HOURS AGO
TMJ4 News

We're Open: 'On Tap' inside the original Pabst Brewery

Man convicted of killing Milwaukee dispatcher in crash gets 18 years

The man convicted of crashing and killing a City of Milwaukee dispatcher was sentenced to 18 years behind bars.
MILWAUKEE, WI・1 DAY AGO