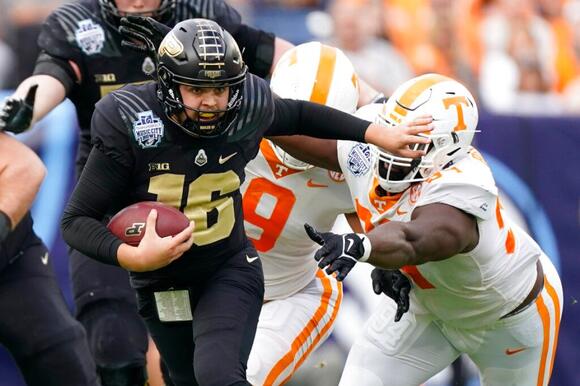 NASHVILLE, Tenn. (WATE) — The Music City has had its share of songs about heartbreak and loss. The Tennessee Vols contributed their own verse Thursday as they loss to Purdue 48-45 in overtime of the Music City Bowl.

Purdue kicker Mitchell Fineran kicked a 38-yard field goal to win after the Vols came up short on a fourth-down run by Jabari Small at the 1-yard line.

Tennessee got the scoring started when Hendon Hooker hooked up with Cedric Tillman for a score for the 10th time this season. Hooker found Tillman streaking behind the defense for a 41-yard scoring strike to give the Vols a 7-0 lead.

It didn’t take the Boilermakers long to answer, on the next play from scrimmage Aidan O’Connell connected with Broc Thompson on a 75-yard touchdown to tie the game at 7 with 10:28 to play in the first quarter.

Hooker and Tennessee continued to have their way with the Purdue secondary, finding Tillman again, this time from 61 yards out to give the Volunteers a 14-7 lead.

Tillman eclipsed the 1,000-yard mark for the season after finishing with seven catches for 150 yards and three touchdowns.

On the next possession the defense came up big, Kamal Hadden picked off O’Connell in the end zone with the Boilermakers driving to tie the game.

The Vols offense then went on an eight-play, 80-yard drive, taking up 2:14, capped by a two-yard touchdown run by Small to give Tennessee a 21-7 lead with 3:29 remaining in the first quarter.

Purdue tacked on three field goals to pull within 8 at 21-16.

With just :34 remaining in the half, DaMarcus Mitchell sacked Hooker jarring the ball loose deep in Tennessee territory, Prince Boyd Jr. recovered the fumble for the Boilermakers. Two plays later O’Connell rolled to his right finding tight end Payne Durham for the two yard touchdown. Purdue led 23-21 at the half.

Tennessee came our fast on the first drive of the second half, Hooker connected with Velus Jones Jr. for a 15-yard touchdown to give the Vols the lead 28-23.

While Hooker had an inconsistent performance he still finished the game with strong numbers, 26-of-41 passing for 378 yards and five touchdowns.

Purdue answered right back when O’Connell dropped an absolute dime to TJ Sheffield in the corner of the end zone to put the Boilermakers back on top.

With the clock running down at the end of regulation, the Vols converted a fourth-and-3 near midfield to allow Chase McGrath to kick a 56-yard field goal but it fell short and to the right.

Johnson City, TN — The ETSU Buccaneer womens basketball team got 14 points from Naveah Brown and 11 points from Jiselle Thomas to defeat Vanderbilt 44-31. The Dores were playing without three players including their leading scorer and turned the ball over 17 times and was outrebounded 47-38.
JOHNSON CITY, TN・2 DAYS AGO
WJHL

Nashville, TN — NASCAR Cup Series driver Daniel Suárez, driver of the No. 99 Chevrolet for Trackhouse Racing, paid a visit to the Casa Azafrán community center to celebrate NASCAR in Nashville and also introduce the Trackhouse Racing superstar to local kids and community leaders from the neighborhoods around the Nashville Fairgrounds Speedway.The event feature […]
NASHVILLE, TN・3 DAYS AGO
WJHL

Suspects sought after Buddhist monk attacked at temple in Nashville

Metro police are asking for the public’s assistance in locating five individuals who attacked a Buddhist monk at a temple in South Nashville.
NASHVILLE, TN・3 DAYS AGO
WJHL

A man is facing felony charges after police say he brought guns and a large amount of drugs inside TriStar Centennial Medical Center earlier this week.
NASHVILLE, TN・3 DAYS AGO