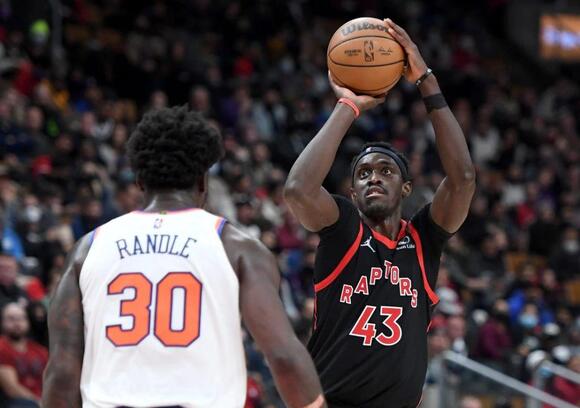 The Toronto Raptors and Toronto Maple Leafs will not allow fans into NBA and NHL games at Scotiabank Arena beginning Friday due to the rise in COVID-19 cases.

In a statement, Maple Leaf Sports and Entertainment — which owns the building and both franchises — said it expects the limitations to be in place for at least three weeks.

The decision comes after the province of Ontario said it was temporarily capping attendance at entertainment venues to 1,000 people or 50 percent capacity, whichever was less.

“We look forward to hosting fans again as soon as the province deems it safe to do so,” MLSE said in a statement.

Earlier this month, the Raptors and Maple Leafs previously began operating at 50 percent capacity, before Ontario announced the tougher restrictions that would limit the 19,800-seat arena (18,800 for hockey) to a maximum of 1,000 fans.

The decision could lead the NHL to postpone more Maple Leafs games altogether. Earlier this week, the league postponed nine upcoming games set to be played in Canada due to several Canadian cities’ inability to welcome fans. One of them was the Maple Leafs’ Jan. 3 home game against the Carolina Hurricanes.

The Leafs, who have not played since Dec. 14 due to COVID-19, are still slated to host the Ottawa Senators on Saturday and the Edmonton Oilers next Wednesday. A Jan. 17 home date with the New Jersey Devils likely will be affected as well.

The Raptors, who played the entirety of last season in Tampa, Fla. because of border-crossing restrictions, have six home games scheduled between Friday and Jan. 11 before a five-game road trip.

The Washington Wizards are receiving heavy interest for one of its All-Star level players as the trade talks around the NBA begin to ramp up soon.
WASHINGTON, DC・1 DAY AGO
Sportsnaut

After finishing 64-18, in first place in the Western Conference a season ago, the Phoenix Suns are back on top
PHOENIX, AZ・1 DAY AGO
Sportsnaut

The Boston Celtics are rewarding Al Horford’s importance to the roster by giving the 36-year-old a contract extension that will
BOSTON, MA・1 DAY AGO
Sportsnaut

The Los Angeles Lakers will have to pick up the pieces Wednesday night when they host the Portland Trail Blazers
LOS ANGELES, CA・2 DAYS AGO
Sportsnaut

The NBA can be cut-throat when expectations aren't met. Here are the NBA coaches that are on the hot seat as the 2022-'23 season progresses.
COLORADO STATE・1 DAY AGO
SB Nation

At some point today, 2018 WNBA MVP and two-time champion Breanna Stewart will fire off a tweet. It will be nearly identical to the tweet she posted yesterday, and the day before, and every day for a few months. The only difference will be the incremental change of a number.
4 HOURS AGO
Sportsnaut

One analyst for MLB network believes a specific pitcher in MLB free agency would be a “perfect guy” for the
BOSTON, MA・2 DAYS AGO
Sportsnaut

The Philadelphia Phillies have reportedly jumped to the front of the pack to acquire a two-time All-Star and one of
PHILADELPHIA, PA・2 DAYS AGO
Sportsnaut

Devin Booker could be Phoenix Suns’ point guard of the future

The Phoenix Suns have been impressive so far this season as they’ve sustained their spot as the top team in
PHOENIX, AZ・2 HOURS AGO
Sportsnaut

The debate about the best NBA players of all time is over. We've compiled this list of the 20 biggest winners to ever step foot on an NBA court.
CALIFORNIA STATE・2 HOURS AGO
Sportsnaut

Miles Bridges is expected to serve a significant suspension once he signs with an NBA team after his plea deal relating to felonies of domestic violence.
CHARLOTTE, NC・1 DAY AGO
Sportsnaut

Cole Caufield’s third-period, power-play goal broke a deadlock and goaltender Jake Allen sparkled to give the visiting Montreal Canadiens a
14 HOURS AGO
Sportsnaut

Matthew Tkachuk, Gustav Forsling, and Ryan Lomberg each scored within a 59-second span during the first period of the Florida
12 HOURS AGO
Sportsnaut

At 27 years old, forward Kyle Kuzma is in the midst of a career-best season for the Washington Wizards. He’s
WASHINGTON, DC・19 HOURS AGO
Sportsnaut

Predators flying high off comeback ahead of visit to Isles

Any New York Islanders coaches and players who spent Thursday night watching their next opponent saw something very familiar —
NASHVILLE, TN・10 HOURS AGO