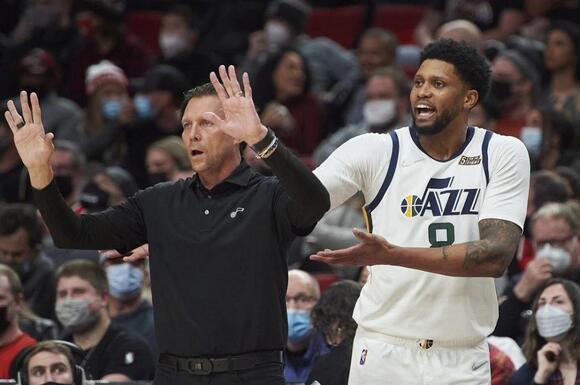 The Utah Jazz and Minnesota Timberwolves are about to spend more holiday time together.

A week after playing in Utah just before Christmas, the Jazz will again host the Timberwolves on Friday night in Salt Lake City, hours before ringing in the new year.

This won’t be a typical Jazz-Timberwolves matchup. Minnesota is missing multiple top players who are in the NBA’s health and safety protocol, including Karl-Anthony Towns, D’Angelo Russell and Jarred Vanderbilt. Anthony Edwards and Taurean Prince are considered day-to-day after clearing protocol.

And though the Jazz are the only team to not miss any player time due to COVID-19 this season, they played without Donovan Mitchell the past two games because of a back injury.

Even without Mitchell, the Jazz have continued their winning ways. They’re on a five-game winning streak, which includes a 128-116 victory over Minnesota on Dec. 23 in Utah.

Malik Beasley was a beast for the T-Wolves in that game, scoring 33 points, while the Jazz got their usual All-Star-level performances from Mitchell (28 points, seven assists, five rebounds) and Rudy Gobert (20 points, 17 rebounds, four blocks).

The T-Wolves were missing seven players for that contest.

“Everybody came in and played with a lot of heart and generated a lot of good shots. Some went in, some didn’t,” Minnesota coach Chris Finch said that night. “We fought back whenever we got down, so (I’m) very pleased with the effort.”

Jazz coach Quin Snyder was content with how his team handled the shorthanded but athletic and energetic Timberwolves in that one.

“There have been times when a team is really aggressive against us defensively, that we haven’t responded on a level that I think we want to see,” Snyder said. “(That night), our guys all responded.”

Though Utah hasn’t lost since then, beating Dallas, San Antonio and Portland, Snyder wasn’t nearly as satisfied with his team’s performance in a 120-105 road win over the Trail Blazers on Wednesday night.

“I was disappointed, really, throughout the first three quarters,” he said. “We’d build a lead and then we’d let up a little bit. We didn’t extend it. … Part of it for me is, I just look at our demeanor and there isn’t an urgency in those moments that I know our team has.”

Minnesota comes into this Northwest Division showdown having lost three of four, including the setback in Utah. The Timberwolves missed 31 of 38 3-point attempts in their 96-88 home loss to the New York Knicks on Tuesday. That came a night after upsetting the Boston Celtics despite the depleted lineup.

“It was an off night. We had all the great looks we absolutely wanted,” Finch said of his team shooting a season-low 18.4 percent from beyond the arc. “Of those 38 shots, I’d say 30 of them were high quality by our best shooters.”

The Jazz won’t have any time to party over the holiday weekend. They host Golden State on New Year’s Day. The Timberwolves will continue their road trip in Los Angeles, playing the Lakers on Sunday and the Clippers on Monday.

The Phoenix Suns have stayed strong despite missing two starting players Chris Paul and Cameron Johnson. When reports of their
PHOENIX, AZ・1 DAY AGO
Sportsnaut

No. 1 North Carolina advanced in the Phil Knight Invitational on Thursday with a slim victory over Portland. Next up,
AMES, IA・2 DAYS AGO
Sportsnaut

Tyrese Samuel banked in a 3-pointer at the buzzer to give Seton Hall a 70-69 win over Memphis on Thursday
SOUTH ORANGE, NJ・2 DAYS AGO
Sportsnaut

No. 24 Purdue routs No. 6 Gonzaga in tourney semifinal

Zach Edey scored 23 points and grabbed seven rebounds as No. 24 Purdue defeated No. 6 Gonzaga 84-66 in the
WEST LAFAYETTE, IN・1 DAY AGO
Sportsnaut

Third-ranked Kansas had its 17-game winning streak halted in its last outing and now looks to begin a new streak
HOUSTON, TX・12 HOURS AGO
Sportsnaut

How To Watch Kansas Jayhawks Basketball Live in 2022

The Kansas Jayhawks are staring down one of the longest win streaks in college basketball history, with 32 win seasons
LAWRENCE, KS・58 MINUTES AGO
Sportsnaut

No. 23 Maryland will look to continue its red-hot start under first-year coach Kevin Willard when it hosts Coppin State
BALTIMORE, MD・2 DAYS AGO
Sportsnaut

How To Watch Michigan Wolverines Basketball Live in 2022

The Michigan Wolverines are as fierce as the creatures they’re named after, with 35 All-Americans emerging from the school over
ANN ARBOR, MI・1 HOUR AGO
Sportsnaut

Skyy Clark and RJ Melendez combined for 36 points on 15-of-20 shooting on Friday as No. 16 Illinois rolled to
CHAMPAIGN, IL・1 DAY AGO
Sportsnaut

How To Watch Wisconsin Badgers Basketball Live in 2022

How would you handle an angry badger? That’s what Wisconsin Badgers opponents have to ask every time this team takes
MADISON, WI・59 MINUTES AGO
Sportsnaut

How To Watch Gonzaga Bulldogs Basketball Live in 2022

The Gonzaga Bulldogs have made an appearance at every NCAA tournament held since 1999, and they’ve shown up in every
SPOKANE, WA・1 HOUR AGO
Sportsnaut

Micah Peavy scored a season-high 16 points and pulled down eight rebounds Saturday as TCU knocked off No. 25 Iowa
FORT WORTH, TX・13 HOURS AGO
Sportsnaut

Caleb Grill scored a game-high 31 points and Iowa State knocked off No. 1 North Carolina 70-65 at the Phil
AMES, IA・1 DAY AGO
Sportsnaut

Buddy Hield scored 26 points for the host Indiana Pacers, who rode a dominant fourth quarter to a 128-117 win
INDIANAPOLIS, IN・1 DAY AGO
Sportsnaut

How To Watch Kentucky Wildcats Basketball Live in 2022

The sound of a ball swishing through the net is synonymous with the Kentucky Wildcats. Why? Well, they’re the single
LEXINGTON, KY・1 HOUR AGO
Sportsnaut

LeBron James scored a season-high 39 points — 16 of them in a decisive stretch — as the visiting Los
LOS ANGELES, CA・9 HOURS AGO
Sportsnaut

The New England Patriots were on the road at U.S. Bank Stadium to take on the Minnesota Vikings on Thanksgiving
MINNEAPOLIS, MN・2 DAYS AGO
Sportsnaut

The last time UConn opposed Iowa State, one team was going to see its season end. This time, neither team’s
AMES, IA・13 HOURS AGO
Sportsnaut

No. 8 Duke and No. 24 Purdue clash in Phil Knight final

No. 8 Duke and No. 24 Purdue have found lots to be happy about so far in two games in
WEST LAFAYETTE, IN・19 HOURS AGO