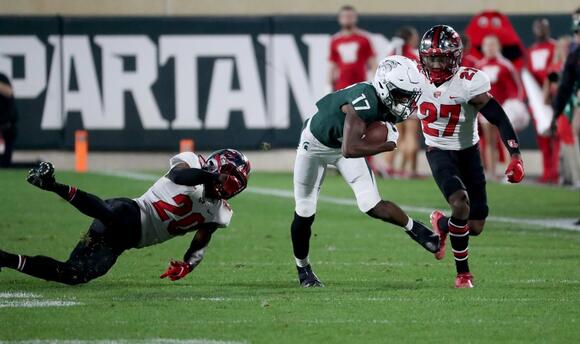 Check out odds, insights and more in our betting preview for the Michigan State Spartans vs. Pittsburgh Panthers Peach Bowl college football matchup on December 30, 2021.

The Peach Bowl will feature a matchup between the Michigan State Spartans and the Pittsburgh Panthers.

Odds for Michigan State vs. Pittsburgh

Odom has spent the past three seasons as the defensive coordinator at Arkansas.
PARADISE, NV・1 DAY AGO
Sports Illustrated

Rams Rule Out Aaron Donald vs. Raiders on Thursday

This will be just the second game he has missed since 2017.
2 HOURS AGO
Sports Illustrated

The Giants are 5.5-point home underdogs against the high-flying Eagles.
PHILADELPHIA, PA・1 DAY AGO
Sports Illustrated

The former running back’s pursuit for office comes to an end.
GEORGIA STATE・18 HOURS AGO