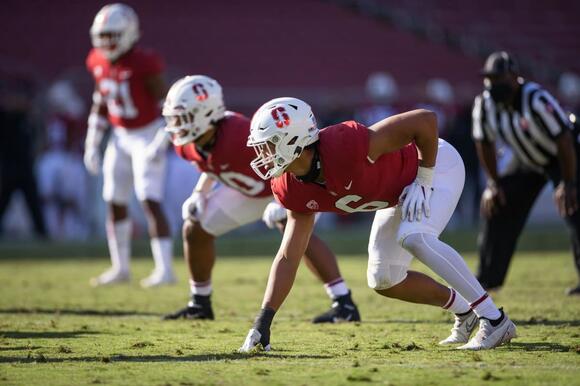 New Virginia football head coach Tony Elliott made his first round of offers this week, offering a number of players, including high school recruits and players in the transfer portal.

Andres Fox, a senior linebacker at Stanford, announced he had received an offer from Virginia on Twitter on Wednesday night.

Fox appeared in 23 games over the last four seasons. This season, he played in six games and made seven tackles and 1.5 tackles for loss.

Elliott has reportedly made three re-offers to high school players who had been previously offered by Bronco Mendenhall. Interestingly, all three of those players are offensive linemen from Tennessee.

Joe Crocker, a 6’6”, 310-pound offensive tackle from Nashville, announced that he had been re-offered by Virginia on Thursday afternoon.

Cal Grubbs, an interior offensive lineman from Maryville, Tennessee, was re-offered by Virginia on Thursday as well.

Additionally, Jayson Jenkins, a defensive lineman in the class of 2022 from Trenton, New Jersey, was offered by Virginia on Wednesday night.

Jenkins is a top target in the class of 2022, holding offers from Missouri, West Virginia, Florida, and several other major conference programs.

Virginia also offered Terrell Jones, a defensive lineman in the class of 2022 from Hoover, Alabama.

Virginia Basketball Moves Up to No. 3 in AP Top 25 Poll

UVA's No. 3 ranking is the program's highest since the end of the 2018-2019 season
CHARLOTTESVILLE, VA・2 DAYS AGO
Cavaliers Now

Everything you need to know about UVA's road game at Michigan on Tuesday night in the ACC/Big Ten Challenge
ANN ARBOR, MI・2 DAYS AGO
Cavaliers Now

Dudley was UVA's starting long snapper on field goals and PATs in the 2019 season
CHARLOTTESVILLE, VA・17 HOURS AGO
Cavaliers Now

No. 3 Virginia Escapes Ann Arbor With 70-68 Win Over Michigan

UVA erased an 11-point halftime deficit to take down the Wolverines in the ACC/Big Ten Challenge on Tuesday night
CHARLOTTESVILLE, VA・1 DAY AGO
ESPN

There will be 63 NCAA volleyball tournament games played until the 2022 champion is crowned. We keep you updated throughout.
WISCONSIN STATE・20 MINUTES AGO
Cavaliers Now

The Cavaliers crushed the previously-unbeaten Nittany Lions to pick up their first win in the ACC/Big Ten Challenge since 2012
STATE COLLEGE, PA・11 HOURS AGO
Cavaliers Now

Inside Lacrosse Tabs Connor Shellenberger as No. 1 Player for 2023 Lacrosse Season