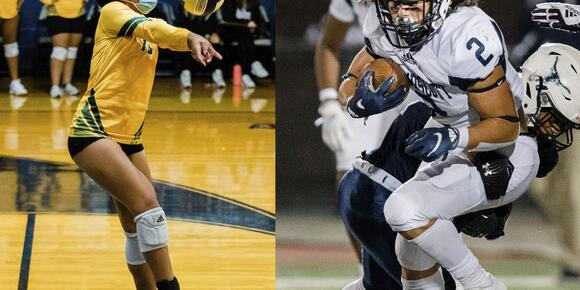 For their exploits in both the classroom and in their respective athletic endeavors, Swampscott star running back Xaviah Bascon and Lynn Classical volleyball star Chloe Clement have been chosen as the Moynihan Lumber Student-Athletes of the Month for December.

Bascon tore up the field at Blocksidge Field and beyond for the Big Blue this year, leading the area in both rushing yards (1,509) and rushing touchdowns (24). He also added 490 receiving yards and a pair of touchdowns. And that was only on offense. Defensively, Bascon contributed 62 tackles and four interceptions. By the end of the season, Bascon racked up a number of awards — including Item/Agganis Offensive Player of the Year and Salem News Offensive Player of the Year. Oh, and the Big Blue won their second straight Division 5 Super Bowl title.

“It was an unbelievable season, one that was like a dream to be honest,” said Bascon. “We had a lot of guys who changed roles, stepped up and helped us get the job done. To finish off my high school career with a Super Bowl win at Gillette, nothing comes close to that.”

And all of that nearly didn’t happen. Two weeks before the 2021 season started, Bascon was still in a back brace, recovering from two fractures in his spine after the Fall II season this past spring.

“It was a real mental battle at first, just returning to the field and being unsure if I could take hits,” said Bascon. “But my coaches and teammates really supported me and pushed me to be the best I could, and I’m truly grateful to them for that.”

But Bascon doesn’t only get the job done on the field. In the classroom, he carries a 3.2 GPA and brought home all A’s during the first quarter grading period — which just so happens to take place during football season.

“It’s all about getting your priorities in order and making sure you’re doing the right things,” said Bascon. “I’m pretty much a homebody, so after football I just come home and do my schoolwork. I have to give a lot of props to my teachers too, they really helped me along the way.”

As for his future plans, the senior says that he’s likely going to take a postgraduate year and try to find a place to continue playing football.

Clement had arguably the greatest season of any volleyball player in Lynn Classical history this past fall, putting up stellar numbers and bringing home a number of accolades in the process.

The senior was a commanding presence for the 18-4 Rams all season long, getting named Greater Boston League MVP for the 2021 season. She finished the year with 277 kills, 184 digs and 83 aces in 22 games played. Those stats were good enough to get Clement chosen for the Massachusetts Division 1 All-State Team ― making her the first Classical player and first GBL player to ever earn such an honor. She was also named the MaxPreps Massachusetts Player of the Week for Nov. 1-7, following her stellar performance in the Division 1 Round of 32.

“The thing I think I’ll remember most about the season is the connection that everyone on the team had with each other,” said Clement, who was a team captain. “We became a family on and off the court and that’s something that we’ll always have.”

And she’s just as much of a star in the classroom. Clement is currently ranked fifth in her class with a 4.54 GPA, and she is also a member of the National Honor Society.

“It wasn’t always easy to maintain that balance of school and athletics,” said Clement. “But at the same time, my goal of playing collegiate volleyball at a good school is what pushed me to find that balance. I always tried to look ahead to the end result, and I want to make everyone proud.”

Clement plans to continue her volleyball career at the collegiate level while pursuing a biology major, but she remains uncommitted at the moment.

“Wherever I do go, I hope to carry everything I learned this year and implement it at the next level,” said Clement.