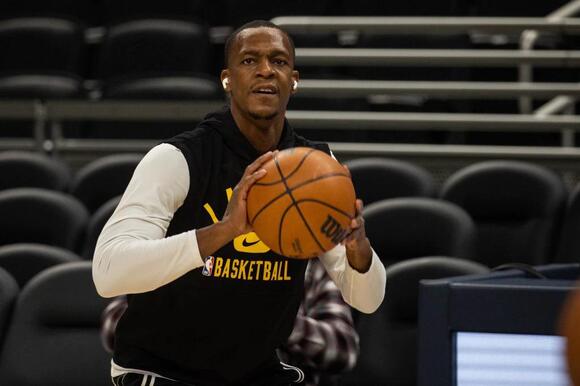 The Cleveland Cavaliers are suddenly extremely thin at the point guard position after Ricky Rubio suffered a torn ACL to his left knee, knocking him out for the remainder of the season. Earlier in the year, they also lost guard Collin Sexton for the season after the young scorer suffered a torn meniscus . Needing to do something to maintain their current playoff pace, the Cavs are nearing a trade for the accomplished veteran Rajon Rondo from the Los Angeles Lakers .

According to Adrian Wojnarowski of ESPN, a trade could be completed as soon as Friday. While there is no word on an expected return heading back to the Lakers, a Rondo trade would provide some immediate experience to the Cavaliers’ backcourt.

With the Cavs off to a 20-14 start, in fifth-place of the Eastern Conference, they’ll hope Rondo can help them stay on track. Rondo is under contract with the Lakers through the remainder of the 2021-22 NBA season, after which he will become an unrestricted free agent.

Rondo is currently in the league’s health and safety protocols as of Dec. 26, but once he’s clear, he could offer a veteran presence who’s also a two-time NBA Champion to a young Cavaliers roster on the rise. In his 16th NBA season, Rondo has played in 18 games for the Lakers this year.

While in desperate need, acquiring Rondo shouldn’t cost much for the Cavs. He’s not an integral part of the Lakers’ rotation, playing just 16.1 minutes per game and the Lakers are likely looking at making some roster changes anyway.

The Cavaliers have several players who are in the same range of what Rondo currently makes and he’s not in high demand at this point in his career. But, Rondo can also provide valuable minutes, while getting another chance to get back to the postseason, where maybe he can give NBA fans a glimpse of “Playoff Rondo” again. 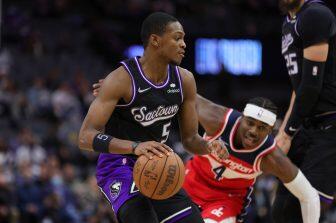 The New York Knicks are working on a trade to send this young player out of the organization. Plus, the team is wanting to move Evan Fournier.
NEW YORK CITY, NY・1 DAY AGO
Sportsnaut

The Los Angeles Lakers will not trade away one of their first-round picks unless they receive an All-Star level player in return.
LOS ANGELES, CA・1 HOUR AGO
560 The Joe

Spo On Barkley's Blow It Up Idea: Who Cares?

Charles Barkley went said Inside The NBA the Miami Heat should blow it up “It might be time to break the team up and start over,” said the NBA Analyst. Miami responded from their embarrassing loss to the Pistons with a 115-110 win over the Clippers.
MIAMI, FL・13 MINUTES AGO
Sportsnaut

Rudy Gobert has already played his former team, the Utah Jazz, once this season. But that game was in the
SALT LAKE CITY, UT・15 HOURS AGO
Sportsnaut

3 takeaways from Chris Paul’s first game back from injury

Chris Paul is finally back in action for the Phoenix Suns after missing 14 consecutive games due to a heel
PHOENIX, AZ・3 HOURS AGO
Sportsnaut

Odell Beckham: I don’t see the point of playing regular season games in 2022

Roughly a week ago, it seemed almost like a foregone conclusion that Odell Beckham Jr. would be on a new
2 HOURS AGO
Sportsnaut

The Detroit Pistons have the unfortunate task of trying to stop Ja Morant for the second time in less than
DETROIT, MI・15 HOURS AGO
Sportsnaut

Jamal Murray drained a 3-pointer with 0.9 seconds remaining to lift the Denver Nuggets to a 121-120 victory over the
DENVER, CO・10 HOURS AGO
Sportsnaut

The visiting Toronto Raptors will be out to continue their dominance of the Orlando Magic on Friday night in the
ORLANDO, FL・18 HOURS AGO
Sportsnaut

The NBA season is less than one-third over. But the New Orleans Pelicans’ unexpected ascension to the top of the
PHOENIX, AZ・16 HOURS AGO
Sportsnaut

Moritz Wagner went for a double-double of 20 points and 13 rebounds, Bol Bol scored another 20 points, and Paolo
ORLANDO, FL・1 DAY AGO
Sportsnaut

The Washington Wizards look to apply the brakes and halt their losing ways on Friday when they visit the Indiana
INDIANAPOLIS, IN・18 HOURS AGO
Sportsnaut

The Cleveland Cavaliers’ Donovan Mitchell looks to work his magic on the visiting Sacramento Kings for the second time this
CLEVELAND, OH・9 HOURS AGO
Sportsnaut

Bookmark. Save. Favorite. Do your thing. This is the one-stop shop for everything related to the NBA schedule for the
UTAH STATE・13 HOURS AGO
Sportsnaut

The Charlotte Hornets and New York Knicks have more in common with each other than either team might prefer. Both
CHARLOTTE, NC・19 HOURS AGO
Sportsnaut

With both teams riding three-game winning streaks, the Milwaukee Bucks and Dallas Mavericks will face off Friday night in Dallas.
DALLAS, TX・12 HOURS AGO
Sportsnaut

The Philadelphia 76ers went winless on their recent three-game road trip through Cleveland, Memphis and Houston. They’ll look to get
LOS ANGELES, CA・17 HOURS AGO