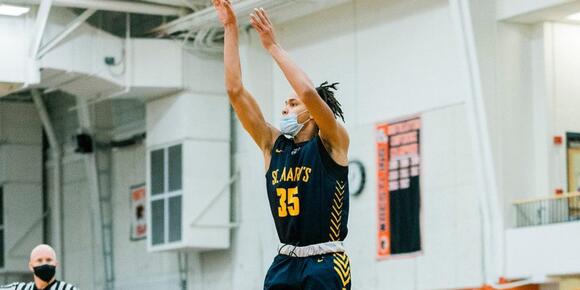 NORTH DARTMOUTH — The St. Mary’s boys basketball team took the momentum from its Boverini Tournament title victory on Wednesday and carried that right into Thursday, going on the road to blow out Bishop Stang by a score of 69-31 in a Catholic Central League matchup.

The Spartans spread the ball around plenty in the victory, as 11 of the 14 players who saw playing time registered at least two points. Ali Barry led all scorers with 19 points to go along with three rebounds, while David Brown Jr. added 13 points from the point guard spot. Omri Merryman had a solid all-around game with 10 points, six rebounds and three blocks. Derick Coulanges and Nick Sacco each had four points and three rebounds, while Henri Miraka (four points), Donovan Clark (four points), Donel Kabongo Mutombo (four points) and Anthony D’Itria (three points) all played well.

The Spartans started fast and never looked back in this one, jumping out to a 27-4 lead in the first quarter and coasting for the rest of the way. The defensive intensity was particularly notable for St. Mary’s, as it only allowed 11 points in the opening half.

The second half was much of the same, as the St. Mary’s starters pushed the lead to nearly 40 points before they were pulled for the reserves to play the final 10-plus minutes.

Twenty-one games, nine players, and one season of basketball underway. When asked what Bishop Fenwick fans can expect from the girls basketball team this season, head coach Adam DeBaggis responded honestly, saying it’s boring when teams take 10 seconds to set up a play. “I want to see uptempo basketball, nothing slow,” DeBaggis said. “We The post Fenwick girls basketball, reporting for duty appeared first on Itemlive.
1 DAY AGO
Itemlive.com

The first Ron Bennett Boys Basketball Jamboree was a success Friday night. There were six games, with the first starting at 4 p.m. and the last tipping off at 7:50 p.m. The games consisted of Chelsea vs. Revere; KIPP vs. Somerville; Everett vs. Wakefield; Lynn Tech vs. Malden; Lynn Classical vs. Melrose; and Lynn English The post Basketball fever returns to Lynn appeared first on Itemlive.
LYNN, MA・1 DAY AGO