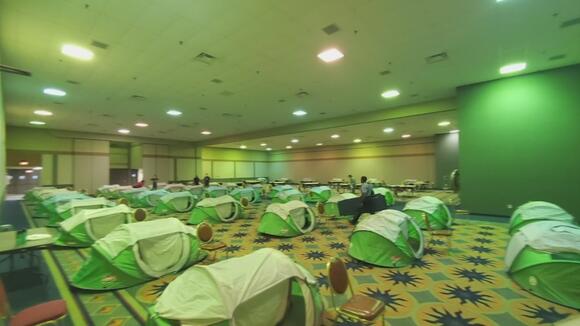 The Unified Government called a special meeting Thursday after new Kansas City, Kansas, Mayor Tyrone Garner shut down plans for the shelter at the Reardon Center earlier this week — all ahead of bitterly cold weather and a snow storm expected this weekend.

Garner said he wasn’t aware of a contract made to open the warming shelter and never meant to put people out. He said he simply didn’t know about the logistics and safety plans.

Cross-Lines Community Outreach Executive Director Susila Jones said they were confused when the mayor decided to shut the overnight homeless shelter down. She said a contract was put in place months ago to use the Reardon Center.

FOX4 Newsletters: Get news updates sent to your inbox

Still Jones said they were planning to open the shelter regardless, arguing their contract is valid.

At Thursday’s meeting, where Garner requested that commissioners discuss the shelter, many spoke out in support. However, some voiced opposition, saying they were concerned about safety.

Several commissioners also spoke in favor of continuing the shelter for the upcoming winter months. But other county leaders also said they felt they weren’t in the loop about the overnight shelter and didn’t know about the contract.

Download the FOX4 News app on iPhone and Android

“I’m not someone that’s going to lock our homeless population out. I’m not that type of person. Never have been and never will be,” the new KCK mayor said. “Those of you that follow me, one of the things that I ran on was coming up with a task force to address poverty and homelessness in Wyandotte County.”

Commissioners agreed the shelter will remain open for the remaining winter months, but several said they’d like to discuss another venue and get more community input.

Kansas City officials are considering creating a special commission on reparations, which would aim to reverse the historical impact of slavery.
KANSAS CITY, MO・3 HOURS AGO
FOX4 News Kansas City

The Kansas City, Kansas Public Library announced they are launching a community survey that will help the current plans for the library.
KANSAS CITY, KS・10 HOURS AGO
FOX4 News Kansas City

The Kansas City Police Department have a person in custody believed to be involved with an overnight homicide at a liquor store Tuesday.
KANSAS CITY, MO・14 HOURS AGO
FOX4 News Kansas City

KANSAS CITY, Kan. — KCK’s first responders are praising one of their own for rescuing tenants from a burning apartment building. As many as 20 residents at the Rainbow Ridge Apartments lost their homes late Saturday night. No lives were lost in the three-story apartment building, which suffered significant damage. Flames were shooting into the […]
KANSAS CITY, KS・1 DAY AGO
FOX4 News Kansas City

The Kansas City branch of Toys for Tots says it is 20,000 toys behind it's goal of helping 43,000 children this Christmas.
KANSAS CITY, MO・5 HOURS AGO
FOX4 News Kansas City

A University Academy high school teacher is on administrative leave pending an investigation. The teacher is accused of using a racial slur in front of students -- and it was caught on camera.
KANSAS CITY, MO・2 HOURS AGO
FOX4 News Kansas City

The Merriam City Council approved a plan to allocate $1 million toward a grant to renovate hotels within the city.
MERRIAM, KS・3 HOURS AGO
FOX4 News Kansas City

The KDOC and KBI are investigating after a 53-year-old inmate was found dead in the Lansing Correctional Facility infirmary on Saturday.
LANSING, KS・1 DAY AGO