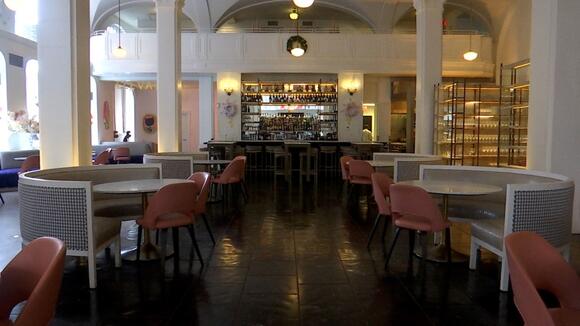 It’s unclear if grant funding proposed by Governor Ralph Northam will be enough to meet the needs of existing applicants as lawmakers previously expected and Governor-elect Glenn Youngkin didn’t commit to a larger investment in a recent one-on-one interview.

Speaking outside of the Quirk Hotel in Richmond to reduce the risk of spreading COVID-19, Retro Hospitality CEO Paul Cooper said inflation and wage increases to attract staff are straining businesses that are still recovering from pandemic restrictions.

Meanwhile, Cooper is still waiting for a check more than a year after applying for the Rebuild VA Small Business Grant Program .

Northam wants to end Virginia’s grocery tax, give money back to taxpayers in budget plan

“That money was promised to us and it’s necessary to keep these small businesses afloat going into the slowest time of the year,” Cooper said. “We are not counting on it at this point.”

Last month, Rebuild Virginia’s Grant Application Manager Amy Brannan estimated it would take between six to ten months for staff to work through a backlog of about 8,000 businesses.

Brannan could not be reached for an update on Thursday but she previously said that existing funding “is likely not going to cover all the remaining applicants.” She said an additional investment of $200 million dollars was suggested to clear the current pipeline and reopen the application portal for new submissions, as lawmakers pledged during last summer’s special session.

“It’s not enough and the losses continue to mount,” Cooper said. “We’re just hoping that the Governor hears us, that there is a response and that these funds are expedited to so many companies that need them now.”

Asked in a recent interview why targeted relief for businesses most impacted by the shutdowns he ordered wasn’t a bigger priority in his budget, Northam said, “Well it has been a priority and Rebuild Virginia has been very successful, especially for small businesses.”

As of Dec. 1, 2021, the program had awarded over 4,000 small businesses a total of $167 million in grant funding to cover expenses like payroll, utilities and rent, according to the Rebuild VA website.

“I’m very proud of what we’ve done…if you compare what Virginia has done to other states,” Northam said.

However, Virginia Restaurant, Lodging and Travel Association Government Affairs Director Robert Melvin said neighboring states like North Carolina have done more. He pointed to a recent press release detailing the state’s commitment of $500 million in direct grants to businesses that experienced losses of 20% or more during the pandemic, with $300 million specifically earmarked for the hospitality industry.

“I do know that both Maryland and DC also appropriated funds specifically for hotels and restaurants from CARES Act funds, but I am not sure the amount,” Melvin added. “The way it looks now, our industry will not have any specific funding for relief compared to a lot of the states around us.”

In an interview last week, Governor-elect Youngkin wouldn’t specifically commit to a larger investment in Rebuild VA. Instead, he detailed his other plans for economic growth, including creating a tax holiday for small businesses, improving workforce development programs, reducing business regulations and expanding opportunities for innovation.

“This is a lot more than a simple line item in a budget,” Youngkin said. “Governor Northam has a different approach as to how to invigorate small business than I do. I believe in providing a tax break for small business. I believe in cutting back regulations in a material way and I believe in getting this economy moving.”

The General Assembly will also have a chance to review and revise the two-year budget. Lawmakers reconvene in Richmond on Jan. 12, 2022.

VSP trooper dragged by vehicle on I-295, suspect on-the-run

There is currently a heavy police presence at Interstate 295 in Mechanicsville.
HANOVER COUNTY, VA・1 DAY AGO