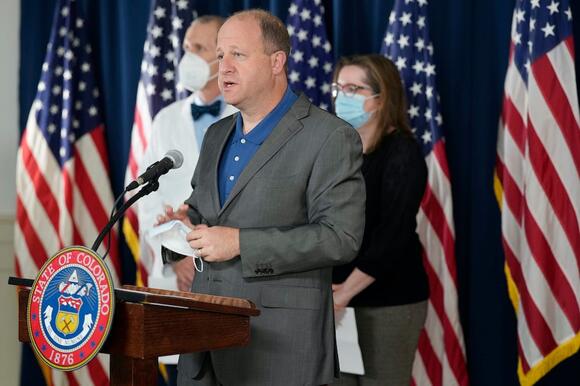 Polis signed an executive order granting individuals pardons for their drug charges, also lifting three commutations and fifteen other individual pardons for prisoners, according to a statement.

Earlier this year, Polis signed into law a bill that allows state residents over the age of 21 to legally possess up to two ounces of marijuana.

That law built on Amendment 64, which was legalized marijuana and passed in 2012, and another bill authorizing the governor to grant pardons to defendants convicted of possessing up to two ounces of marijuana, according to the statement.

“Adults can legally possess marijuana in Colorado, just as they can beer or wine," Polis said in the statement. "It’s unfair that 1,351 additional Coloradans had permanent blemishes on their record that interfered with employment, credit, and gun ownership, but today we have fixed that by pardoning their possession of small amounts of marijuana that occurred during the failed prohibition era."

Polis also reduced the sentence of Rogel Aguilera-Mederos, the truck driver who was sentenced to 110 years in prison for killing four people in a 2019 motor vehicle accident, to 10 years in prison.

Why the Georgia Senate runoff is still important

Democrats retained control of the Senate by winning races in the key battleground states of Pennsylvania, Arizona, Nevada, and New Hampshire. In Georgia, Democrat Sen. Raphael Warnock edged past Republican Herschel Walker 49.4 percent to 48.5 percent, but the race proceeded to a runoff because neither candidate reached 50 percent.
GEORGIA STATE・18 HOURS AGO
The Hill

INDIANAPOLIS (AP) — Indiana’s Republican attorney general can keep investigating an Indianapolis doctor who spoke publicly about providing an abortion to a 10-year-old rape victim from neighboring Ohio, a judge ruled Friday. An attempt to block a probe by Attorney General Todd Rokita’s office was rejected by Marion...
INDIANA STATE・1 DAY AGO
The Hill

An Indiana judge found on Friday that the state’s attorney general violated Indiana law by publicly disclosing his investigation into the doctor who conducted an abortion for a 10-year-old rape victim from Ohio, but declined to halt the investigation. Marion County Superior Court Judge Heather Welch rejected Dr. Caitlin...
INDIANA STATE・1 DAY AGO
The Hill

Three Florida-based immigrant rights groups sued Florida Gov. Ron DeSantis (R) on Thursday over the migrant flights that his administration organized to Martha’s Vineyard, Mass., in September. Florida Immigrant Coalition, Americans for Immigrant Justice and Hope CommUnity Center filed the lawsuit against DeSantis and Florida Transportation Secretary Jared Perdue, arguing that they were “infringing upon the…
FLORIDA STATE・19 HOURS AGO
The Hill

The voters have spoken: They support early childhood education

In November, New Mexico voters approved a constitutional amendment that will create a dedicated funding stream for early childhood education. The measure, which will increase distributions from the state’s Land Grant Permanent Fund, is projected to infuse $150 million annually into programs for young children. New Mexico’s ballot initiative...
ALABAMA STATE・1 DAY AGO
The Hill

RENO, Nev. (AP) — A tiny Nevada toad at the center of a legal battle over a geothermal power project has officially been declared an endangered species, after U.S. wildlife officials temporarily listed it on a rarely used emergency basis last spring. “This ruling makes final the listing of...
NEVADA STATE・1 DAY AGO
The Hill

President Biden’s push to elevate South Carolina in the early primary calendar set off a fight this week between Democrats pleased with the changes and those seeking to protect their early voting status. The Democratic National Committee’s (DNC) rules panel approved a shake-up to the schedule on Friday afternoon...
GEORGIA STATE・21 HOURS AGO
The Hill

Taking on the elite becomes go-to brand for DeSantis

Florida Gov. Ron DeSantis (R) loves to despise “the elite.”. In speeches, remarks at news conferences and even in an op-ed he penned in The Wall Street Journal last year, his message has been the same: “Don’t trust the elites.”. “We rejected the elites and we were...
FLORIDA STATE・15 HOURS AGO
The Hill

At least a few Americans will spend the holiday season watching Republican Rep. Kevin McCarthy of California bow and scrape to get the support of enough of his party conference to be elected Speaker of the House in early January. Depending on how many members actually show up for the vote, McCarthy can’t afford to lose more than a half dozen of his Republican mates to gain the majority of the overall body he needs.
CALIFORNIA STATE・1 DAY AGO
The Hill

Biden says Walker doesn’t deserve to be in the Senate

President Biden on Friday said that Republican candidate Herschel Walker does not deserve to be in the Senate, just days ahead of the runoff in Georgia on Tuesday. During a stop at a International Brotherhood of Electrical Workers (IBEW) fundraiser in Boston, Biden emphasized the differences between Democratic Sen. Raphael Warnock (D), and Walker.
GEORGIA STATE・1 DAY AGO
The Hill

New York State Health Commissioner Dr. Mary Bassett announced Friday she will be leaving her post on Jan. 1 and returning to the Harvard University Chan School of Public Health. “This was a very difficult decision. I have tremendous respect for the work our staff has done during a very...
MASSACHUSETTS STATE・1 DAY AGO
The Hill

Secretary of State Antony Blinken on Thursday appointed former Rep. Abby Finkenauer (D-Iowa) to be the State Department’s special envoy for global youth issues. In her new role, Finkenauer “will encourage youth-related programming around the administration’s foreign policy priorities and existing regional initiatives, while consistently and meaningfully consulting with young people on the formulation and implementation of relevant policies and programs,” Blinken said in a statement.
IOWA STATE・2 DAYS AGO
The Hill

Georgia topped its one-day record for early voting again on Friday, with more than 350,000 voters casting their vote in the runoff election between Sen. Raphael Warnock (D) and Republican Herschel Walker. Gabriel Sterling, one of the state’s top election officials in his capacity as chief operating officer of the...
GEORGIA STATE・1 DAY AGO
The Hill

New York and Florida likely will be the difference for Republican control of the House of Representatives following the 2022 midterms. Strong performance on the top of the ticket by Florida’s Ron DeSantis and New York’s Lee Zeldin pushed a number of fence-sitting congressional races red. No small part of either state’s outcomes was the result of waves of residents packing up and moving from New York to Florida over the past several years. In the Sunshine State, these domestic migration trends added to Republican successes. In the Empire State, they may have been enough for Democrat Kathy Hochul to hold onto the governor’s mansion, despite a rigorous campaign by Republican Zeldin.
FLORIDA STATE・2 DAYS AGO
The Hill

DENVER (KDVR) — The father of JonBenét Ramsey has sent a letter to Colorado Gov. Jared Polis with a plea to let a private company test decades-old DNA evidence. It’s been nearly 26 years since Ramsey was killed in her home in Boulder, and police appear no closer to solving it now than they were back in 1996. Now, the girl’s father, John Ramsey, told Gov. Polis that time for answers is running out, and he wants justice.
COLORADO STATE・2 DAYS AGO