YakTriNews.com, KAPP-TV and KVEW-TV provide you with the latest news, weather, sports, live events, and more for Yakima and Tri-Cities, Washington. 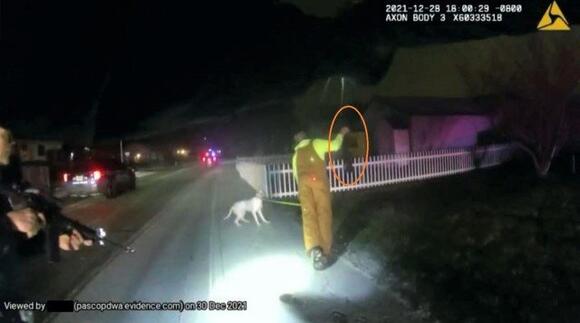 PASCO, Wash. — A man was arrested in his neighborhood on Tuesday evening after aggressively yelling and threatening his neighbors while armed with a pellet gun and walking a dog, according to Pasco Police .

Authorities responded to the 4100-block of Meadowsweet St around5:45 p.m. on Tuesday, December 28, 2021, after they received multiple reports from people residing on the block.

READ: Burbank man passed out in stolen pickup truck, knocked an officer over to elude arrest

One of the neighbors reportedly threatened to shoot anyone who came to his house during this altercation.

Pasco police officers arrived and surrounded the house where the suspect was reported. However, they quickly realized that the man who has since been identified as Jeremy A. Collins of Chewelah, WA, was a block away walking a dog with his rifle in one hand.

Collins allegedly pointed his gun at the Pasco Police patrol car when responding officers recognized that it was simply a pellet gun. They switched to less-than-lethal tactics including a stun gun and K9 units.

Authorities say that Collins ignored commands, eventually leading them to use a Conducted Energy Weapon (CEW) to subdue him and bring him into custody. The dog was brought back to the residence safely, and no else one was hurt as a result of this incident.

Officers recovered throwing knives on his person, and Collins was booked into the Franklin County Jail on an investigative hold for two counts of assault to the second degree.

COPYRIGHT 2022 BY YAKTRINEWS. ALL RIGHTS RESERVED. THIS MATERIAL MAY NOT BE PUBLISHED, BROADCAST, REWRITTEN OR REDISTRIBUTED.

KENNEWICK, Wash. – A murder suspect has been arrested in connection to the killing of a Kennewick man on November 19. Antonio Aguilar-Hartmann, 24, was arrested Wednesday in Lincoln County. The Kennewick Police Department said it worked with the Benton County Prosecutor’s Office to obtain a nationwide extraditable arrest warrant for Aguilar-Hartman due to it being a first degree murder...
KENNEWICK, WA・4 DAYS AGO
YakTriNews.com | KAPP-KVEW TV

KENNEWICK, Wash. – A Kennewick man has been arrested in connection to a shooting that happened back in October on Columbia Center Boulevard. Bryan De Los Santos, 18, was arrested on several warrants, including for assault and unlawful possession of a firearm. Around 2 p.m. Tuesday, members of the Tri-City Regional SWAT Team and the Criminal Apprehension Team were in...
KENNEWICK, WA・5 DAYS AGO
YakTriNews.com | KAPP-KVEW TV

PASCO, Wash. — A detached shop was severely damaged during a fire just north of Pasco Tuesday morning, Nov. 22.   The fire on the 5100 block of Janet Road was reported to emergency personnel just before 7 a.m.   The Franklin County Sheriff’s Office was among responding agencies and said everyone got out and no one was injured....
PASCO, WA・5 DAYS AGO
YakTriNews.com | KAPP-KVEW TV

KENNEWICK, Wash. – Authorities have identified a Kennewick man who they said was found shot to death on November 19. Authorities said Mark Jurgens, 67, was found dead from what looked like an apparent gunshot wound. Kennewick officers were called to a home on the 4100 block of West 3rd Avenue for a report of a medical assist. However, when...
KENNEWICK, WA・6 DAYS AGO
YakTriNews.com | KAPP-KVEW TV

WAPATO, Wash. – The Yakima Co. Sheriff’s Office has identified the man who was found dead near Wapato in August of 2022. Investigators said Miguel “Elvin” Peredes, 46, is from Nicaragua. They have been able to get in touch with Peredes’ family and they have been told about his death. According to authorities, Peredes’ body was found on August 16...
YAKIMA COUNTY, WA・6 DAYS AGO
YakTriNews.com | KAPP-KVEW TV

KENNEWICK, Wash. — An accessible archery range for disabled veterans will be completed thanks to a grant from Gesa Credit Union.   Friends of Disabled Veterans has announced it was chosen to receive $50,000 through the Local Heroes Grant Award.   The non-profit organization plans to use these funds for an Americans with Disability Act compliant outdoor archery range and pathways....
BENTON CITY, WA・4 DAYS AGO
YakTriNews.com | KAPP-KVEW TV

BENTON CITY, Wash. — Near Rattlesnake Mountain, 20 minutes north of Benton City, is a project in the works to help veterans and their families. “I retired about 20 years ago from the US army and in 2016 we decided to actually start a nonprofit and that’s where Friends of Disabled Veterans was started,” Founder and CEO Brian Moore said....
BENTON CITY, WA・4 DAYS AGO
YakTriNews.com | KAPP-KVEW TV

KENNEWICK, Wash. – Authorities have made another arrest in the murder investigation of a Kennewick man. The 14-year-old male was arrested Thursday afternoon after a traffic stop was made on the Benton County Cable Bridge. The boy was taken to the Benton-Franklin Juvenile Justice Center and is facing a murder charge. This is the second arrest law enforcement has made...
KENNEWICK, WA・10 DAYS AGO
YakTriNews.com | KAPP-KVEW TV

KENNEWICK, Wash. — A wild ride Monday night, Nov. 14, ended with a crash into a light pole.   Kennewick Police say officers attempted to stop a reckless driver in the area of 10th Avenue and Edison Street shortly after 11 p.m.   Police say the vehicle initially pulled over before speeding off. The vehicle was spotted again about 10...
KENNEWICK, WA・13 DAYS AGO
YakTriNews.com | KAPP-KVEW TV

UMATILLA, Oregon — Umatilla School District Students are starting their Thanksgiving break early due to illness.   In a letter sent to families and posted on social media, the school district said there was a surge of illnesses this week.  According to the district, more than 3o% of McNary Heights Elementary School students were absent Monday, Nov. 21. Umatilla High...
UMATILLA, OR・6 DAYS AGO
YakTriNews.com | KAPP-KVEW TV

KENNEWICK, Wash. — An Arkansas man has been arrested for allegedly using a gun to steal a vehicle.   Kennewick Police were called out to the 1300 block of N Columbia Center Blvd on Sunday evening, Nov 13, for a vehicle theft in progress.   According to the victim, a man had taken her vehicle by force, using a handgun....
KENNEWICK, WA・14 DAYS AGO
YakTriNews.com | KAPP-KVEW TV

WALLA WALLA, Wash. — The Mill Creek Project was authorized by congress after the worst flood in Walla Walla history in 1931. With it, a coalition of City of Walla Walla leaders created a reservoir, a diversion dam and a series of canals to manipulate flood waters away from the city center. At Monday afternoon’s Walla Walla County Commissioners meeting,...
WALLA WALLA, WA・6 DAYS AGO
YakTriNews.com | KAPP-KVEW TV

UPDATE: Pilot okay after plane goes down in Franklin Co.

KAHLOTUS, Wash. – UPDATE: November 15, 3:24 p.m. The Franklin County Sheriff’s Office said the pilot is okay after their plane went down near Kahlotus. The pilot reported they had a problem with the engine, but was able to put the plane down in an open field. #FranklinCounty Sheriff’s Office responded to this crash. They say it was a single-pilot...
FRANKLIN COUNTY, WA・12 DAYS AGO
YakTriNews.com | KAPP-KVEW TV

Toppenish winter weather shelter will open this year thanks to YVFWC

TOPPENISH, Wash. — After months of uncertainty, Camp Hope director Mike Kay said the Toppenish winter weather shelter will be able to open this year, thanks to funding from Yakima Valley Farm Workers Clinic. “They’ve been more than generous,” Kay said. YVFWC already donates the use of the shelter space, which they own, as well as paying for the utilities....
TOPPENISH, WA・9 DAYS AGO
YakTriNews.com | KAPP-KVEW TV

“She needs justice,” Alyssa Moore’s mother speaks out about daughter’s case for the first time

GRANDVIEW, Wash. — Misty Knox showed off the bracelets she wears to honor her daughter’s legacy. “That say, ‘their story doesn’t end until we stop telling it. I don’t want her to be forgotten,” she said as she twisted the rubber bracelets. It’s been more than a year since 18-year-old Alyssa Moore was murdered outside of a house party in...
KENNEWICK, WA・13 DAYS AGO
YakTriNews.com | KAPP-KVEW TV

TOPPENISH, Wash. — Nearly two dozen people have died on U.S. Highway 97 between Union Gap and Toppenish since 2001, but almost a third of those fatalities happened where the highway intersects with Larue Road. “It’s the deadliest intersection within the boundaries of the reservation,” said Hollyanna Littlebull, traffic safety coordinator for the Yakama Nation DNR Engineering Office. “There’s been...
TOPPENISH, WA・12 DAYS AGO
YakTriNews.com | KAPP-KVEW TV

BENTON COUNTY, Wash. — A race we haven’t taken our eyes off of is for Benton County Prosecutor. It’s been a close standoff between candidates Ryan Lukson and Eric Eisinger since the beginning. Eisinger is currently in the lead. The race is just more than 2,000 votes apart, with about 900 more ballots to be processed. “With the number that...
BENTON COUNTY, WA・9 DAYS AGO
YakTriNews.com | KAPP-KVEW TV

Richland father arrested for negligence, manslaughter in drowning of one-year-old

RICHLAND, Wash. — When detectives found an alleged pattern of negligence, they arrested the father of a one-year-old child who drowned in a bathtub in late October. According to investigators from the Richland Police Department, officers and medics from the Richland Fire Department rushed to the WoodSpring Suites hotel on October 28, 2022 following reports that a one-year-old child might...
RICHLAND, WA・17 DAYS AGO
YakTriNews.com | KAPP-KVEW TV

KENNEWICK, Wash. — Benton County celebrated a milestone Thursday morning, one they said will impact the whole of the community. They’re one step closer to an addiction services and mental health crisis facility. It’s been a long time coming—years in the making. They said the facility will have immediate benefits to the community. “A Tri-Citian dies of addiction every five...
BENTON COUNTY, WA・10 DAYS AGO

YakTriNews.com, KAPP-TV and KVEW-TV provide you with the latest news, weather, sports, live events, and more for Yakima and Tri-Cities, Washington.