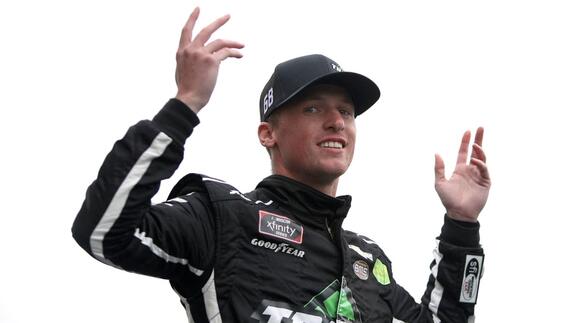 Brandon Brown announced his partnership with LGBcoin, a crypto “meme coin” inspired by the ‘Let’s Go Brandon’ chant. NASCAR has not approved it yet.

NASCAR Xfinity driver Brandon Brown tweeted that he has a primary partner for the 2022 season—LGBCoin, a “cryptocurrency meme coin” whose first three letters stand for “Let’s Go Brandon.” However, NASCAR has not approved it nor has the approval process begun as of Thursday evening despite Brandonbilt Motorsports’ announcement.

“We are thrilled to partner with Brandonbilt Motorsports and Brandon Brown for the 2022 NASCAR Xfinity Series season,” said James Koutoulas, LGBcoin HODLer and founder of Typhoon Capital Management, in a news release . “Brandon is not only an incredibly talented driver, but also a thoughtful individual wise beyond his years. His commitment and singular focus on his profession is inspiring and his personal story is one that we can all be proud of—an American story of success and perseverance. Brandon is truly America’s Driver.”

Following Brown’s Talladega victory last season, the Xfinity driver was being interviewed by an NBC Sports reporter, and the crowd could be heard chanting something during their conversation. Per Fox NY , the reporter suggested it was “Let’s go, Brandon” in honor of the driver; however, it was later revealed that the crowd was saying, “F--- Joe Biden.” The chant rapidly became a political meme.

NASCAR attempted to distance itself from the chant as president Steve Phelps said before the final race of the season, per Yahoo! Sports , “We do not want to associate ourselves with politics, the left or the right.” He continued, saying, “We obviously have and we’ve always had as a sport tremendous respect for the office of the president no matter who is sitting.

“I think it's an unfortunate situation. Do we like the fact that it kind of started with NASCAR and then is gaining ground elsewhere? No, we’re not happy about that. But we will continue to make sure that we have respect for the office of the president.”

The sponsorship announcement that has yet to be approved by NASCAR comes less than two weeks after Brown told The New York Times he was unable to get a sponsor because of the chant, adding that he had “zero desire to be involved in politics.”

“This whole Talladega race win was supposed to be a celebration, and then it was supposed to be something that I was able to use to move up, and I really wanted to capitalize on that,” Brown said to The Times . “But with this meme going viral, it was more of, I had to stay more silent, because everybody wanted it to go on to the political side. I’m about the racing side.”

Per Brandonbilt Motorsports’s press release, the 28-year-old “will sport an eye-catching red, white, and blue livery with the logo and wordmark of LGBcoin aboard his No. 68 Chevrolet Camaro for all 33 races of the NXS season.”

The former Golden Hurricane coach finished with a 43–53 record at the school.
TULSA, OK・2 DAYS AGO
AllTarHeels

The Tar Heels hold a top-25 recruiting class and the No. 5 class in the ACC.
CHAPEL HILL, NC・32 MINUTES AGO
Sports Illustrated

The top four is set ahead of conference championship weekend, sparking plenty of debate before the final playoff field is set.
GEORGIA STATE・2 HOURS AGO
Sports Illustrated

The Spaniard is headed to Aston Martin in 2023.
9 HOURS AGO
Sports Illustrated

Plus more notes on Week 13 of the college football season, including thoughts on whether Jim Harbaugh would return to the NFL, players skipping bowl games and more.
ANN ARBOR, MI・1 DAY AGO
Sports Illustrated

The road to the Super Bowl goes through Kansas City and Philadelphia for now, but there’s a host of hot teams climbing into contention.
16 HOURS AGO