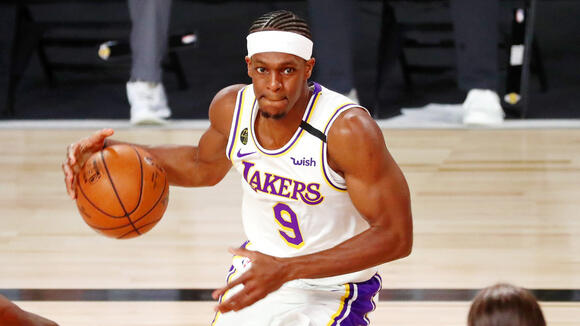 The Cavaliers are in discussion to acquire Lakers guard Rajon Rondo, according to Shams Charania of The Athletic. The deal is expected to be complete by Friday, according to ESPN's Adrian Wojnarowski.

However, Rondo is currently in COVID-19 protocols. He joined the list on Dec. 26, shortly after the Lakers elevated both Malik Monk and Avery Bradley from the COVID-19 list. Rondo would be able to join the team immediately after he's cleared.

However, throughout his NBA career, Rondo has averaged 9.8 points, 4.6 rebounds and 8.0 assists per game. The two-time NBA champion played an instrumental role in the Lakers winning a championship in the 2020 NBA Finals.

Rondo recorded 105 assists in the NBA playoffs in ’20, the most by a bench player in a single postseason since the ’71 playoffs and passing former Spurs star Manu Ginobili's 95 in ’14.

The Cavaliers (20–14) currently occupy the No. 5 spot in the Eastern Conference.

Bally Sports Southeast issued a statement with an update on Bob Rathbun after he appeared to have a medical emergency during the pregame show.
ATLANTA, GA・2 DAYS AGO
FadeawayWorld.net

Kendall Jenner has reportedly moved on from Devin Booker and is allegedly dating ex-boyfriend Harry Styles again.
28 MINUTES AGO
ESPN

Warriors coach Steve Kerr said mistakes down the stretch caused the team to blow a four-point lead with 13.3 seconds left, leaving him to wonder, "How did we just let that happen?"
SALT LAKE CITY, UT・18 MINUTES AGO
FastBreak on FanNation

How to Watch Nuggets-Blazers Game On Thursday

The Denver Nuggets (14-10) and Portland Trail Blazers (13-11) will play each other on Thursday night in Portland. Here’s how to watch, with game time and TV information, lineups, bios, plus other key information pertaining to both teams.
DENVER, CO・32 MINUTES AGO
Sports Illustrated

Charles Barkley: Heat Need to Break Up Roster, ‘Start Over’

He thinks it’s time for Miami to make some trades.
MIAMI, FL・12 HOURS AGO
Sports Illustrated

Report: Cowboys Concerned If Beckham’s Can Return in 2022

There’s reportedly some doubt on whether the free agent can play by mid-January.
DALLAS, TX・1 DAY AGO
Sports Illustrated

The veteran recorded a 3.10 ERA in 2022 while playing for the Dodgers.
TEXAS STATE・1 DAY AGO
Sports Illustrated

Jerry Jones ’Not Confident at All’ Signing OBJ Without Workout

The free agent tore his ACL during February’s Super Bowl LVI and hasn’t played in a game since.
1 DAY AGO
Sports Illustrated

Despite interest from the Giants, the slugger is staying in New York.
NEW YORK CITY, NY・15 HOURS AGO
Sports Illustrated

Jiménez has spent his entire career with Detroit, making the All-Star team in 2018.
DETROIT, MI・4 HOURS AGO
Sports Illustrated

The NBA standings are closer than we’ve ever seen, with a glut of teams hovering around .500. Is this the new normal?
UTAH STATE・16 HOURS AGO
Sports Illustrated

Here’s who and what stood out at one of the most anticipated college events of the season.
IOWA STATE・14 HOURS AGO
Sports Illustrated

We also give one reason to tune in to every matchup.
ALABAMA STATE・1 DAY AGO
Sports Illustrated

Justin Jefferson Claps Back at Jets DB for Postgame Remark

The Vikings star scored a touchdown when the two were matched up one on one.
MINNEAPOLIS, MN・2 DAYS AGO
Sports Illustrated

The star wide receiver was limited to just three games this season with a hamstring injury and announced that he would not play in the College Football Playoff.
COLUMBUS, OH・5 HOURS AGO
Sports Illustrated

Who and What Defined Men’s College Basketball’s First Month?

Our writers talk teams they’re high on, who might be overrated and more.
KANSAS STATE・10 HOURS AGO