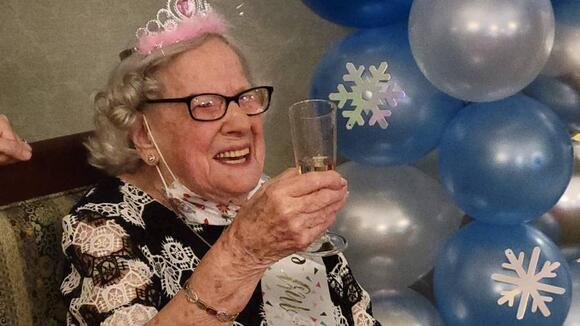 QUEENSBURY, N.Y. ( NEWS10 ) – When it comes to age, 102 is a big number. And at The Landing in Queensbury, Thursday was a big day for a veteran with plenty to celebrate.

Cecily Geraghty, who’s birthday is on New YEar’s Day, got an early surprise birthday party on Thursday, held by her nursing home neighbors and caregivers. Geraghty has spent 13 years at the nursing home, and said that the plan to surprise her with the celebration was a complete success.

Celebrate the New Year by hiking in the Capital Region

“It’s been a wonderful surprise,” said Geraghty. “Believe me, I never expected this. They never told me nothing.”

Geraghty got her favorite fish and chips for lunch, a choice of meal that points at her own past. Although she’s spent most of her life in New York and Florida, she was born and raised in Britain. When World War 2 called for a generation to step up, Geraghty heeded the call, and joined the Royal Air Force, taking care of pilots.

“We did everything for them. We prepared all their meals,” she said. “Those pilots we got to know very well. Some of them didn’t come back.”

Geraghty served for five years during World War 2. On her big 100th two years ago, she received a letter from Queen Elizabeth; a customary gesture for any Royal Air Force pilot to reach triple digits.

War leaves its marks on anyone, but on Thursday, much was celebrated about different marks; namely, those Geraghty herself left on The Landing at Queensbury, and everyone within it. Fr. Joe Anselment blessed the lunch with some words, and had much more to say about what the lady of honor herself meant to the center.

“She bends with the light of the place,” Anselment said with a chuckle. “She is a sparkling, sparkling presence.”

Even so, Geraghty has never stopped finding new thrills. Earlier this year, she and 11 other World War 2 veterans traveled to Schenectady to fly in an era-appropriate biplane provided by Dream Flights , a nonprofit group that honors veterans with a chance to fly a piece of their own history. For Cecily, it was one of the latest in a 102-year-long list of memories she’ll never forget.

“I’m driving the plane, as you see,” she said, miming holding a steering wheel as she spoke in the moments before digging in to her birthday lunch. “The pilot’s at the back of me.”

And no matter the age, she’s still smiling.