After 2 Weeks In The Hospital With COVID Pneumonia, Activist Mel Reeves Encourages Others To Get Vaccinated 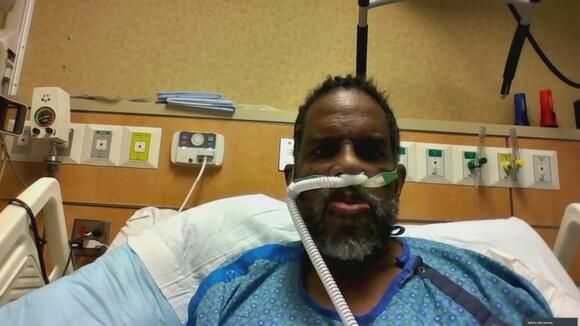 MINNEAPOLIS (WCCO) – A long-time community activist and organizer is speaking out from his hospital bed about the importance of getting vaccinated.

Mel Reeves has been in the hospital these past two weeks.

He shared his story with WCCO-TV’s Reg Chapman in hopes that his community takes the virus seriously and gets protected.

“You know I was in a fight for my life here,” said Reeves.

Since 1981, Reeves’ justice-oriented work has seen him fight for police accountability, education reform and social justice. His latest battle has been against a virus, which he says almost claimed his life.

“The viral load was just rushing, it just shut down my lungs, “Reeves said.

A positive COVID home test sent Reeves to the ER. There, doctors admitted him and gave him drugs to help reduce his viral load.

After three days in the hospital he was sent home, but the virus was not done with him.

Reeves not only had COVID – he had pneumonia, his lungs inflamed from the infection. He says he wore his mask and social distanced.

“The only thing I didn’t do was to get a vaccination but it’s because I was still trying to figure out which one that wouldn’t have the side effect that would wind up hurt me,” Reeves said.

Reeves says an issue with blood clots prevented him from getting vaccinated. But doctors now believe he can take Moderna’s vaccine.

“This thing is serious. Folks got to take this serious, people are literally dying,” said Reeves.

He gets the concerns some Black people have about the vaccine.

“I get it because of our history medically in this country, but we have people of color you know who helped develop some of these vaccines, “ Reeves said.

His message is simple.

“People should get vaccinated, wear your mask, social distance if you are going out to party even among friends and family just wear your mask, it doesn’t hurt anything,” Reeves said.

Reeves says the emails and phone messages from community members gave him the will to fight to live.

He hopes they keep supporting others who are struggling with COVID and make sure they get vaccinated.

Dear Mr Reeves: My 10 year old great granddaughter said to tell you to get better so you can help people to learn that people shouldn't laugh at you when you get the vaccine. it may not stop you from getting Covid, but you'll probably just stay home until you're better and not have to go to the hospital. All people have the right to make their own choices and not be mean.

Thank you Mr. Reeves for trying to get a Message out to your fellow Americans. My story is this: I'm a 76 year old lady who is eternally grateful to be alive. I have had 8 full Strokes in the past 5 years, and as a result I have a Blood Clot in my Brain and numerous other issues. I took the Maderna Shots and I'm doing GREAT...I'm so glad that I am Fully Vaccinated and a Booster. I take precautions for my well being and Hopefully I will live a while longer and enjoy every day. GOD BLESS YOU TODAY AND ALWAYS..🙏🏽💙🙏🏽🙋🏽‍♀️😊🙋🏽‍♀️

TWO HARBORS, Minn. -- Nurses from a northern Minnesota hospitals say they're joining in on the strike authorization vote happening Wednesday.Meanwhile, Essentia Health said it has reached a "tentative agreement" with nurses in Moose Lake, so those nurses will not be joining in on the vote.The strike vote will involve 14 facilities and thousands of nurses.These workers say they've been working without a contract since the end of September.In September, members of the Minnesota Nurses Association went on a three-day strike. After that, they said they were hopeful they could get back to the bargaining table and get a deal...
MOOSE LAKE, MN・2 DAYS AGO
CBS Minnesota

MINNEAPOLIS -- WCCO is once again teaming up with the Minnesota Assistance Council for Veterans this holiday season. The organization has one goal, to end veteran homelessness.Dawn Glaze is one of thousands of veterans who found the help she needed from MAC-V. The Army veteran had a sudden change in her job and housing status, which put her on the street."My career in the military was cut short due to medical issues," she said.However, Glaze's commitment to serve others was not cut short by her short stay in the military. She worked for 22 years as a nurse, working to save...
MINNEAPOLIS, MN・1 DAY AGO
CBS Minnesota

MINNEAPOLIS -- The American Civil Liberties Union of Minnesota announced Wednesday a settlement with the city of Minneapolis for police mistreatment of protesters during the protests following George Floyd's murder.According to ACLU-MN, the class action lawsuit was settled for a $600,000 payment and "numerous reforms." The lawsuit was filed in 2020 on behalf of 12 protesters who were injured. "People who are demonstrating peacefully should never be met with police violence as they were in Minneapolis during protests over MPD's murder of George Floyd," said ACLU-MN Legal Director Teresa Nelson. "Tear gas, foam bullets and pepper spray became weapons for intimidating...
MINNEAPOLIS, MN・1 DAY AGO