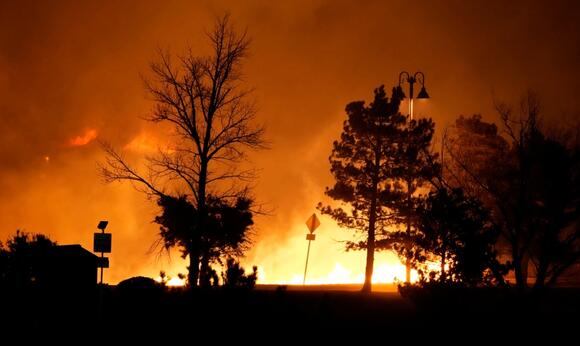 DENVER (AP) — An estimated 580 homes, a hotel and a shopping center have burned and tens of thousands of people were evacuated in wind-fueled wildfires outside Denver, officials said Thursday evening.

At least one first responder and six others were injured, though Boulder County Sheriff Joe Pelle acknowledged there could be more injuries and deaths could be possible due to the intensity of fires that quickly swept across the region as winds gusted up to 105 mph (169 kph).

The first fire erupted just before 10:30 a.m. and was “attacked pretty quickly and laid down later in the day and is currently being monitored” with no structures lost, Pelle said.

A second wildfire, reported just after 11 a.m., “ballooned and spread rapidly east,” Pelle said. The blaze spans 2.5 square miles (6.5 square kilometers) and has engulfed parts of the area in smoky, orangish skies and sent residents scrambling to get to safety.

The activity of the fires, which are burning unusually late into the winter season, will depend on how the winds behave overnight and could determine when crews are able to go in and begin assessing the damage and searching for any victims.

“This is the kind of fire we can’t fight head on,” Pelle said. “We actually had deputy sheriffs and firefighters in areas that had to pull out because they just got overrun,” he added.

Evacuations have been ordered for the city of Louisville, home to about 21,000 people, and Superior, which has another 13,000 residents.

The neighboring towns are roughly 20 miles (32 kilometers) northwest of Denver in an area filled with middle and upper-middle class subdivisions surrounded by shopping centers, parks and schools. The area is in between Denver and Boulder, a foothills college town home to the University of Colorado.

Residents evacuated fairly calmly and orderly, but the winding streets in the suburban subdivisions quickly became clogged as people tried to get out. It sometimes took cars as long as 45 minutes to advance about a half mile (less than a kilometer).

Small fires cropped up here and there in surprising places — on the grass in a median or in a dumpster in the middle of a parking lot — as wind gusts caused the fire to jump and spread. Shifting winds caused the skies to turn from clear to smoky and then back again as emergency sirens blared nearby.

Some of the several blazes in the area Thursday were sparked by downed power lines.

Six people who were injured in the fires were being treated at UCHealth Broomfield Hospital, spokesperson Kelli Christensen said. A nearby portion of U.S. Highway 36 also was shut down.

Colorado’s Front Range, where most of the state’s population lives, had an extremely dry and mild fall, and winter so far has continued to be mostly dry. Denver set a record for most consecutive days without snow before it got a small storm on Dec. 10. It hasn’t snowed since, though snow was expected in the region Friday.

One video captured by a bystander outside a Superior Costco store showed an apocalyptic scene with winds whipping through barren trees in the parking lot surrounded by gray skies, a hazy sun and small fires scattered across the ground.

Leah Angstman and her husband saw similar dark skies while returning to their Louisville home from Denver International Airport after being away for the holidays. As they were sitting on the bus going toward Boulder, Angstman recalled instantly leaving clear blue skies and entering clouds of brown and yellow smoke.

“The wind rocked the bus so hard that I thought the bus would tip,” she wrote in a message to The Associated Press.

The visibility was so poor that the bus had to pull over and they waited a half-hour until a regional transit authority van escorted them to a turnaround on the highway. There she saw four separate fires burning in bushes across the freeway, she said.

“The sky was dark, dark brown, and the dirt was blowing in swirls across the sidewalk like snakes,” she said.

Angstman later ended up evacuating, getting in a car with her husband and driving northeast without knowing where they would end up.

Vignesh Kasinath, an assistant professor of biochemistry at the University of Colorado in Boulder, evacuated from a neighborhood in Superior with his wife and her parents. Kasinath said the family was overwhelmed because of the sudden evacuation warning and anxious from the chaos while trying to leave.

“It’s only because I am active on Twitter I came to know about this,” said Kasinath, who said he did not receive an official evacuation notice from authorities.

The fires prompted Gov. Jared Polis to declare a state of emergency, allowing the state to access disaster emergency funds.

The evacuations come as climate change is making weather more extreme and wildfires more frequent and destructive, scientists say. A historic drought and heatwaves have made wildfires harder to fight in the U.S. West.

Ninety percent of Boulder County is in severe or extreme drought, and hasn’t seen substantial rainfall since mid-summer.

“With any snow on the ground, this absolutely would not have happened in the way that it did,” said snow hydrologist Keith Musselman, who was at home when the fire broke out not far away.

Musselman said this severe fire risk is expected in September and October following a dry summer, but the lack of any precipitation – snow or rain – this late in the season is highly unusual.

The National Weather Service predicts up to a foot of snow could fall tomorrow in Boulder, and that moisture would bring substantial relief, Musselman said.

Two rescued from plane caught in power lines in Maryland

Nebraska agriculture officials say another 1.8 million chickens must be killed after bird flu was found on a farm in the latest sign that the outbreak that has already prompted the slaughter of more than 50 million birds nationwide continues to spread.
NEBRASKA STATE・1 DAY AGO
KCAU 9 News

A 28-year-old man who used to be employed by the Virginia State Police has been identified as the suspect in a triple homicide in Riverside, California.
RIVERSIDE, CA・1 DAY AGO
KCAU 9 News

Defeated Republican Arizona gubernatorial candidate Kari Lake’s campaign has sued Maricopa County and its election officials, demanding they respond to the campaign’s public records requests about malfunctions on Election Day before the county certifies its vote canvass on Monday. Maricopa County, which spans the Phoenix area and comprises about 60 percent of Arizona’s population, has […]
MARICOPA COUNTY, AZ・3 DAYS AGO
KCAU 9 News

7 Republicans most likely to challenge Trump in 2024

All eyes are turning to a number of Republicans to see which rising stars and notable voices might decide to take on former President Trump in 2024.
FLORIDA STATE・1 DAY AGO
KCAU 9 News

Hunters in Illinois harvested a preliminary total of 52,354 deer during the first weekend of the Illinois firearm deer season Nov. 18-20, according to a news release
ILLINOIS STATE・3 DAYS AGO
KCAU 9 News

Florida Gov. Ron DeSantis is gaining steam on former President Trump in a would-be match-up for the Republican presidential nomination.  But even Republicans who want DeSantis to topple a Trump run have privately expressed some doubts about a potential run during the primary and — if he makes it — in the general election.  Here […]
FLORIDA STATE・3 DAYS AGO
KCAU 9 News

Mauna Loa remains in a yellow advisory with dozens of small daily earthquakes, a sign that the large volcano could be headed toward eruption.
HAWAII STATE・2 DAYS AGO
KCAU 9 News