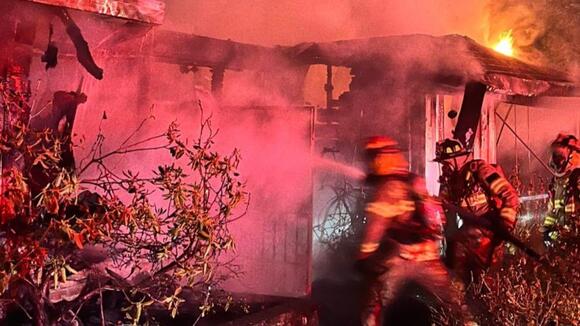 SACRAMENTO, Calif. (KTXL) — Firefighters in Arden-Arcade responded to two early morning fires on Thursday, with the second one reported at a home mere blocks away from the other.

The Sacramento Metropolitan Fire District said the first fire happened around 4 a.m. on La Sierra Drive. Firefighters were able to extinguish the fire and keep it contained to the home’s detached garage unit.

Nobody was hurt in the fire as no one was home at the time, officials reported.

The second fire happened about 30 minutes later at a home three blocks away on El Toro Way. The fire began on the outside wall of the home’s garage and found its way to the other outside wall, setting fire to a pile of firewood.

Metro Fire said the homeowners spotted the fire thanks to their puppy, which needed to go outside and woke them up.

Firefighters were able to quickly handle the fire and prevent any damage to the interior of the home. No injuries were reported.

Metro Fire did not say what caused the fires.

ISELTON, Calif. (KTXL) — One person was found dead inside a structure fire in Isleton on Wednesday morning, according to the Rio Vista Fire Department. Crews arrived to the structure at around 1 a.m. with mutual aid provided by fire agencies from Isleton, Montezuma, Fairfield, Suisun City, Dixon and Vallejo. Rescue efforts in the interior […]
ISLETON, CA・13 HOURS AGO
FOX40

STOCKTON, Calif. (KTXL) — Boats and yachts will be lit in festive lights as a Stockton holiday tradition continues this weekend.  The 41st Annual Lighted Boat Parade will occur Saturday from 5 p.m. to 7:30 p.m. at Weber Points at the downtown waterfront at 221 North Center Street. According to the Visit Stockton website, the […]
STOCKTON, CA・6 HOURS AGO
FOX40

(KTXL) — One person was arrested after driving the wrong way down State Route 99 Friday, the California Highway Patrol said. According to CHP, the North Sacramento CHP division received several calls in the early morning hours on Friday about a driver headed south on northbound SR-99 near Elverta Road. CHP said other drivers on […]
RANCHO CORDOVA, CA・11 HOURS AGO
FOX40

CITRUS HEIGHTS, Calif. (KTXL) — A suspect in a series of bank robberies in Sacramento County was arrested Monday, the Citrus Heights Police Department said. According to the police department, John Dean Shultz, 32, was the suspect in the investigation into four bank robberies that took place between Auburn and Citrus Heights. Police said Schultz […]
SACRAMENTO COUNTY, CA・11 HOURS AGO
FOX40

SACRAMENTO, Calif. (KTXL) — Six people safely escaped from a large house fire in south Sacramento early Thursday morning, according to Metro Fire. Metro Fire shared on social media at around 2:30 a.m. that fire crews were working this large fire. Smoke detectors in the home alerted the occupants of the fire and they were […]
SACRAMENTO, CA・6 DAYS AGO
FOX40

SACRAMENTO, Calif. (KTXL) — The California International Marathon will be taking place through the Sacramento area, closing several roads throughout the morning and afternoon on Sunday, Dec. 4. The race will begin at the Folsom Dam and continue through the streets of Orangevale, Fair Oaks, Carmichael and Sacramento, ending at the state Capitol building. The […]
SACRAMENTO, CA・2 DAYS AGO
FOX40

Catalytic converter thieves caught at the scene in Woodland

WOODLAND, Calif. (KTXL) — Two men were arrested in Woodland after police witnessed them stealing catalytic converters on Tuesday morning, according to the Woodland Police Department. When officers were dispatched around 12:40 a.m. to the area of West Elliot Street, they spotted Robert Nesbit, 41, and Michael Crow, 46, both of Woodland, attempting to steal […]
WOODLAND, CA・1 DAY AGO
FOX40

Arrest made in assault of 60-year-old in Rancho Cordova

UPDATE 8:53 a.m. on Nov. 30: James Hall, 42, has been arrested for assaulting Timothy Fairall, 60 on Monday in Rancho Cordova, according to the Sacramento County Sheriff’s Office. The sheriff’s office said Hall confessed to assaulting Fairall. Original Story Below: RANCHO CORDOVA, Calif. (KTXL) — A 60-year-old man out for a ride on an […]
RANCHO CORDOVA, CA・1 DAY AGO
FOX40

LINCOLN, Calif. (KTXL) — The Lincoln Police Department are looking for the suspect(s) involved in a series of rim and tire thefts in the city. Between midnight and 5 a.m. on Tuesday, multiple vehicles in the area of Joiner Parkway and Lincoln Boulevard, north of Auburn Boulevard, had their rims and tires stolen. The suspect […]
LINCOLN, CA・8 HOURS AGO
FOX40

Chain controls in the Sierra Nevada: This is what you should do when they are established

(KTXL) — With a winter storm expected across the Sierra Nevada mountain range Thursday and potentially into the weekend, many drivers in the area will have to put chain controls on their vehicles. According to Caltrans, when drivers need chain controls they will be reminded through signs along roadways warning of an upcoming chain control […]
CALIFORNIA STATE・14 HOURS AGO
FOX40

YUBA COUNTY, Calif. (KTXL) — A toxicology report indicated that an inmate died from fentanyl poisoning on Wednesday, Nov. 2, according to the Yuba County Sheriff’s Department. According to the sheriff’s department, officers were alerted that inmate, Matthew D. Perez, was in distress and performed medical treatment until paramedics arrived. Despite the use of Narcan […]
YUBA COUNTY, CA・4 HOURS AGO
FOX40

Warming centers to be activated as cold temperatures hit Sacramento

Sacramento woman’s ashes to be launched into outer space

(KTXL) — A rocket launching from New Mexico will be taking the ashes of a Sacramento woman into space on Wednesday as part of a memorial.  Sy Vang, 43, died in November of 2020 from complications from ovarian cancer. She was active in the community and helped lead fundraisers that helped families in need. She […]
SACRAMENTO, CA・1 DAY AGO
FOX40

While Hawaii is experiencing the reawakening of the world's largest active volcano, it has been more than 100 years since California's volcanoes have seen any action.
CALIFORNIA STATE・12 HOURS AGO
FOX40

New area code is available in these Northern California counties

CALIFORNIA (KTXL) — A new area code became available for people in multiple Northern California counties on Monday.  According to the California Public Utilities Commission (CPUC), residents who live in the 209 area code region may be given the new 350 area code if they request new service or an additional phone line.  Customers with […]
CALIFORNIA STATE・2 DAYS AGO
FOX40

RIO VISTA, Calif. (KTXL) — A suspected drunken driver allegedly killed another driver after crashing head-on into them, the California Highway Patrol said. According to the CHP, a woman driving a Subaru southbound on Highway 160, north of Highway 12, veered into the northbound lane and hit a Honda. The Honda was forced off the […]
RIO VISTA, CA・2 DAYS AGO