MLB Insider: Yankees Have Considered Trading For Matt Chapman to Use Him at Shortstop 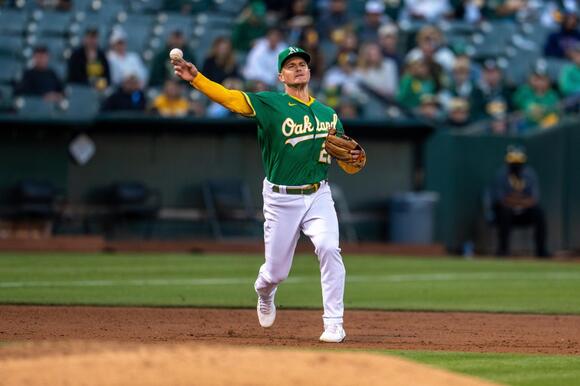 All offseason, fans and pundits alike have pondered exactly what the Yankees will do at shortstop in 2022.

Could New York sign a star in free agency? Some of the best names were swooped up by other teams before the lockout, but Carlos Correa and Trevor Story are still available.

Alternatively, will the Yankees seek to add a stopgap at the position, signing a cheaper short-term option to allow top prospects Anthony Volpe and Oswald Peraza to continue to develop at their own pace before a big-league promotion?

Those two scenarios appear to be the likeliest for New York, but an MLB insider presented a new theory this week.

In an interview on The Michael Kay Show on Thursday, ESPN's Buster Olney told Don La Greca that the Yankees have had internal discussions about trading for Oakland's third baseman Matt Chapman and using him at shortstop.

"If I were to guess, I think they'll end up with one of the Oakland guys. Matt Chapman, for example, maybe you acquire him to be the one-year shortstop," Olney said. "I know he's a third baseman, he's exceptional, but if you added Matt Chapman, you would be improving your defense on the left side of the infield. And I know the Yankees have talked a little bit about this internally. Look, can Matt Chapman play shortstop? I think they wind up with one of those guys. Maybe it's Olson and then they hold back and they pay Aaron Judge."

Olney added that the Yankees and managing general partner Hal Steinbrenner were quiet before the lockout because "they want to know what the rules are." With a new collective bargaining agreement on the way in the new year, the organization preferred to wait it out before adding any massive contracts to their payroll.

In other words, Olney reported that rather than investing a significant amount of money on a player like Correa, New York would use prospects to acquire a versatile defender, move him to shortstop for the next year or two and adjust accordingly when Volpe or Peraza are ready for The Show.

Let's break this hypothetical down a little further.

New York has a surplus of infielders heading into the 2022 season, with Gleyber Torres set to return to second base. Adding someone like Chapman would allow Gio Urshela to remain at third while Luke Voit plays first and DJ LeMahieu serves as a utility man, filling in all over the diamond.

Urshela played some shortstop at the end of this past season, flashing the leather at both positions on the left side, but Chapman provides another level of defensive wizardry. The 28-year-old has won two Platinum Glove Awards and is a three-time Gold Glove Award winner. In 2021, he led all qualifying third basemen with 17 Outs Above Average, per Statcast.

Chapman's bat packs a punch as well. Or at least it has in the past. Two years ago, the third baseman was an All-Star, finishing sixth in the race for the American League MVP Award while slashing .249/.342/.506 with 36 homers over 156 games. The year before that, Chapman had a career-high .278 batting average and .864 OPS over 145 games.

For the price it would take to acquire Chapman—who has two more years of team control before free agency—perhaps Matt Olson would be the better option for New York. It doesn't solve their shortstop conundrum but his left-handed bat fits in New York's lineup, tailor-made for Yankee Stadium.

If you're curious, Chapman has played shortstop before, but it's a very small sample size. He lined up at short for a total of 10 innings over four games in the last two seasons. He also made 10 appearances at the position in the minor leagues (eight starts).

The Yankees can certainly find other defensive-minded shortstops this offseason. Chapman would be a better addition than some of the veterans New York has been linked to this winter, but trading for this player would obviously require a package of prospects.

Then again, there are two top-tier shortstops available to be signed when the lockout ends. Perhaps the Yankees need to just bite the bullet and sign Correa or Story before coming up with an alternative like this one, spending some money in order to reel in the best player available.

Either way, Olney sounded confident that the Yankees will make some sort of splashy move when the lockout comes to an end in 2022.

"But I do think that when the dust settles and 2022 starts, that the Yankees will have made significant acquisitions," he said. "Whether it's a trade for Matt Chapman with Oakland, because the Athletics are expected to clean house with all their expensive guys. Whether it's a Matt Olson, signing Freddie Freeman, signing Trevor Story, which I think is the more likely shortstop that they would land [rather than Carlos Correa]. I think that they're going to do something."

Ex-Yankees Reliever Getting Plenty of Interest in Free Agency

Where will Tommy Kahnle land in free agency this offseason?
9 HOURS AGO