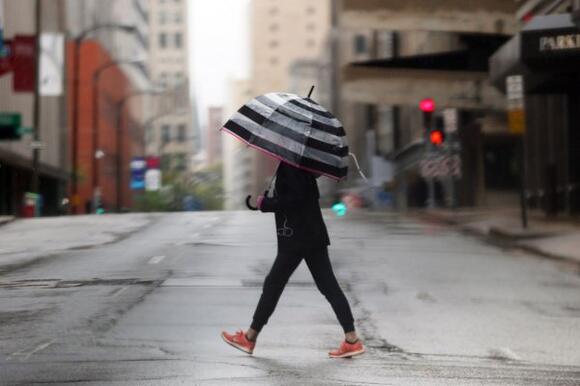 Dec. 30 (UPI) -- As Americans ring in the new year and say goodbye to 2021, a large portion of the country will be at risk for a serious severe weather outbreak that could involve nocturnal tornadoes, AccuWeather forecasters say.

"As a potent storm traverses from the Plains into the Ohio Valley from Friday into Saturday, it will bring drenching rainfall and strong to severe thunderstorms," said AccuWeather meteorologist Alyssa Smithmyer.

During the day on Friday, showers are expected across eastern Texas, much of Arkansas, northern and central Louisiana and portions of Mississippi, Alabama and Tennessee. By Friday night, a cold front moving into the region and a strengthening area of low pressure along that front will cause explosive thunderstorm development.

While severe weather events are less frequent in the winter than during the other seasons of the year, they can occur at any time. The unseasonably warm and humid air in place across the South will add to the severity of the storms. Flooding downpours, damaging wind gusts and tornadoes will all be threats with any thunderstorms that develop.

As was the case a few weeks ago when a historic tornado outbreak unfolded, much of the severe weather is expected during the nighttime hours. In addition, since Friday night is New Year's Eve, more people than usual will be out late at night and on the roads. But for those who may turn in early, forecasters say residents should be sure to have a way to be woken up should a severe thunderstorm warning or tornado warning be issued.

"Since the majority of the population is asleep [during the overnight hours], it is challenging for residents to be fully prepared and take quick action to protect themselves," explained Smithmyer.

On Friday night, cities such as Little Rock, Ark., and Shreveport, La., will be at risk for severe weather.

The threat will slowly shift eastward on Saturday into Memphis and Nashville, Tenn.; Tupelo and Jackson, Miss.; and Huntsville and Birmingham, Ala. Severe weather will also be possible in parts of Kentucky still trying to clean up from the destructive tornadoes of a few weeks ago.

The severe risk will continue into Saturday night, bringing potentially dangerous weather to Knoxville, Tenn., and Atlanta. If a tornado warning is issued, it is advised to get to an interior room away from windows if a basement or storm shelter is not available.

In locations where damaging winds and tornadoes do not occur, flooding rainfall will be a concern. Some of the same areas in Tennessee, Arkansas, Mississippi, Alabama and Kentucky will be at risk for storms that could produce flooding.

However, the flooding potential will also extend outside of that area and include southern portions of Illinois, Indiana and Ohio. Heavy rain with possible flooding will be a threat as far east as West Virginia, western Virginia and western North Carolina.

Some rain is also likely farther to the east in Virginia and North Carolina, where a moderate to severe drought is in place, according to the United States Drought Monitor.

Some damaging storms ripped through parts of the South from Wednesday night into Thursday.

A line of severe weather moved across the South, spawning tornado warnings and watches across six states. There were three tornadoes and over 30 damaging wind reports, according to preliminary data from the Storm Prediction Center.

Storms reportedly caused a roof collapse at a pizza bar, trapping eight people inside when one of the possible tornadoes ripped through Winfield, Ala. There were no reported injuries. There was also a report of a wooden beam crashing through a car's windshield in Winfield.

At 8:28 p.m. CST, a radar-confirmed tornado was located over Rainsville, Ala., and reportedly caused damage to at least one building as well as a softball field.

Behind the next round of severe storms, sharply colder air will move into much of the southern Plains and Southeast, putting an end to the long stretch of warm air and record-challenging heat.

There are signs that warmer air may return by the middle of next week, but temperatures will likely not be quite as far above average as they have been with the current warm spell.

Scenes from the great outdoors around the world

Angler finds message in a bottle in Maryland

A Virginia angler casting his line in the Chesapeake Bay said his most exciting catch of the day wasn't a fish -- it was a message in a bottle.
MARYLAND STATE・1 DAY AGO
UPI News

An Oklahoma elementary school shared video of some unusual visitors -- an escaped drift of pigs foraging on the playground.
OWASSO, OK・19 HOURS AGO
UPI News

Squirrel knocks out power to one-third of Tennessee company's customers

An injured bald eagle that escaped from rescuers while being transported for veterinary care in Texas was safely recaptured the next morning.
SAN ANTONIO, TX・14 HOURS AGO
UPI News

Watch: Deputies help round up six loose emus in Michigan

Authorities in Michigan helped a farmer round up six emus that escaped and went running loose near a busy road.
KALAMAZOO COUNTY, MI・13 HOURS AGO
UPI News

A Missouri man on his way to go fishing with his brother made a pit stop at a gas station and won $50,000 from a scratch-off lottery ticket.
MISSOURI STATE・13 HOURS AGO
UPI News

Michigan's win over rival Ohio State pushed the Buckeyes out of the Top 4 in the latest College Football Playoff Rankings, the selection committee announced. USC also joined Georgia, Michigan and TCU in the Top 4.
COLUMBUS, OH・21 HOURS AGO