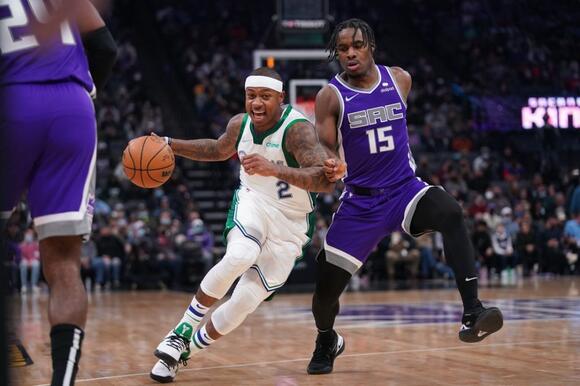 Veteran guard Isaiah Thomas was placed into COVID-19 protocol on Thursday, one day after making his debut with the Dallas Mavericks.

The addition of Thomas raises the number of Dallas players in the protocol to eight.

Star guard Luka Doncic will miss his 10th straight game when the Mavericks visit the Sacramento Kings on Friday. Doncic missed five games with an ankle injury and will be missing his fifth due to being in the COVID-19 protocols.

Thomas was signed to a 10-day contract with Doncic and fellow guards Tim Hardaway Jr. and Trey Burke all in the protocol.

Thomas scored six points in 13 minutes on Wednesday when the Mavericks dropped a 95-94 decision to the Kings in the first of back-to-back contests in Sacramento.

Dallas is the ninth team for the 32-year-old Thomas, who was a two-time All-Star for the Boston Celtics before a serious hip injury during the 2017 playoffs curtailed his effectiveness.

The other Mavericks in the protocol are Maxi Kleber, Brandon Knight, Boban Marjanovic and JaQuori McLaughlin.

The Phoenix Suns have stayed strong despite missing two starting players Chris Paul and Cameron Johnson. When reports of their
PHOENIX, AZ・1 DAY AGO
FastBreak on FanNation

Jarrett Allen is on the injury report for Sunday's game between the Cleveland Cavaliers and Detroit Pistons.
CLEVELAND, OH・19 MINUTES AGO
Sportsnaut

Tyrese Samuel banked in a 3-pointer at the buzzer to give Seton Hall a 70-69 win over Memphis on Thursday
SOUTH ORANGE, NJ・2 DAYS AGO
Sportsnaut

LeBron James scored a season-high 39 points — 16 of them in a decisive stretch — as the visiting Los
LOS ANGELES, CA・10 HOURS AGO
Sportsnaut

Charlotte Hornets forward Gordon Hayward is out indefinitely with a fracture in his shoulder, and his wife claims the team’s
CHARLOTTE, NC・1 DAY AGO
Sportsnaut

Avalanche get jump on Stars, pull away to win

Josh Manson had a goal and an assist, Nathan MacKinnon, Logan O’Connor and Dryden Hunt also scored, and the Colorado
DENVER, CO・11 HOURS AGO
Sportsnaut

Buddy Hield scored 26 points for the host Indiana Pacers, who rode a dominant fourth quarter to a 128-117 win
INDIANAPOLIS, IN・1 DAY AGO
Sportsnaut

How To Watch Gonzaga Bulldogs Basketball Live in 2022

The Gonzaga Bulldogs have made an appearance at every NCAA tournament held since 1999, and they’ve shown up in every
SPOKANE, WA・2 HOURS AGO
Sportsnaut

How To Watch Kansas Jayhawks Basketball Live in 2022

The Kansas Jayhawks are staring down one of the longest win streaks in college basketball history, with 32 win seasons
LAWRENCE, KS・2 HOURS AGO
Sportsnaut

How To Watch Michigan Wolverines Basketball Live in 2022

The Michigan Wolverines are as fierce as the creatures they’re named after, with 35 All-Americans emerging from the school over
ANN ARBOR, MI・2 HOURS AGO
Sportsnaut

How To Watch Kentucky Wildcats Basketball Live in 2022

The sound of a ball swishing through the net is synonymous with the Kentucky Wildcats. Why? Well, they’re the single
LEXINGTON, KY・2 HOURS AGO
Sportsnaut

No. 24 Purdue routs No. 6 Gonzaga in tourney semifinal

Zach Edey scored 23 points and grabbed seven rebounds as No. 24 Purdue defeated No. 6 Gonzaga 84-66 in the
WEST LAFAYETTE, IN・1 DAY AGO
Sportsnaut

No. 8 Duke and No. 24 Purdue clash in Phil Knight final

No. 8 Duke and No. 24 Purdue have found lots to be happy about so far in two games in
WEST LAFAYETTE, IN・20 HOURS AGO
Sportsnaut

The Detroit Pistons entered the 2022-’23 NBA season with high expectations for their young roster led by Cade Cunningham. Before
DETROIT, MI・1 DAY AGO
Sportsnaut

A break early Friday morning gave the Colorado Avalanche, well, a break. The Avalanche were prepared to play the Predators
DENVER, CO・1 DAY AGO
Sportsnaut