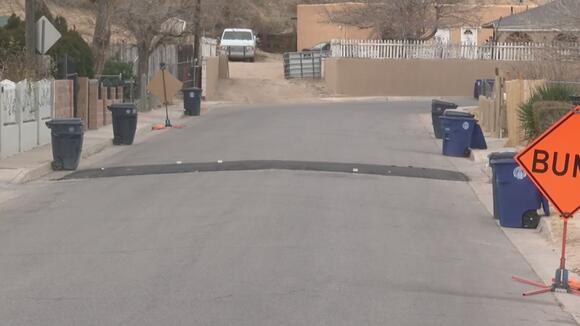 ALBUQUERQUE, N.M. (KRQE) – People living on a little block tucked away in an Albuquerque neighborhood have been complaining for years about speeders, now the city is doing something about it.

The block-long street near West Central has been a problem for years, with speeders ending up in people’s yards. During a news conference on Thursday morning, Sena announced they’ve finally come up with a solution: two new speed bumps.

“These are the best options for slowing cars entering those curves and hopefully keeping cars on the road,” said Timothy Brown, the division manager for Traffic Engineering with the City of Albuquerque .

Councilor Sena says she’s received dozens of complaints about this street, and about countless others in her district. Brown says they get more than 100 neighborhood requests a year for work to slow down speeders. Residents who are begging for a solution to traffic problems in their neighborhoods, hoping for stop signs, speed bumps, traffic circles, or medians to keep through traffic out.

Of all the requests they receive in a year, only about ten neighborhoods see a solution. This year, Evansdale is one of them. A lot of those requests don’t go anywhere because they’re for streets considered arteries or intended for heavy traffic.

Dense fog for the morning commute, and another storm on the way

ALBUQUERQUE, N.M. (KRQE) – Tourists from out of state were hoping for a nice vacation. However, the last day they were here in Albuquerque, someone stole from their hotel room. It’s often heard about trailers taken or cars broken into at hotels. This time, a hotel room rummaged through. “I felt it was a safe place,” […]
5 HOURS AGO
KRQE News 13

ALBUQUERQUE, N.M. (KRQE) – Just before 5 a.m. Sunday, the Bernalillo County Sheriff’s Office responded to a home on La Vega Drive in the South Valley for reports of an armed subject barricaded inside the residence. Story continues below:. Education: New Mexico relaxing rules for high school standardized...
17 HOURS AGO
KRQE News 13

"I thought this would be a good way to honor everybody in police enforcement," said Michelle Lameres, owner of Blackbird Coffee House.
16 HOURS AGO
KRQE News 13

BCFD said this challenge has been used by departments across the country for decades.
17 HOURS AGO
KRQE News 13

The lanes surrounding the area were shut down, and officials were advising the public to avoid the area.
1 DAY AGO
KRQE News 13

Southbound lanes of Cerrillos Road from Siler Road to Calle de Cielo were closed during the investigation.
1 DAY AGO
KRQE News 13

Three people were detained after a pursuit in Santa Fe County. Two were charged.
15 HOURS AGO
KRQE News 13

Hotels by ABQ Sunport frustrated with being targeted by criminals

The hotels have tried to outsmart the thieves over the years by adding more security cameras and even automatic gates, with no success.
2 DAYS AGO
KRQE News 13

Police said they are still investigating.
1 DAY AGO
KRQE News 13

The murder took place on August 6.
1 DAY AGO
KRQE News 13

A man is accused of causing thousands in damages to phone retail stores in ABQ.
2 DAYS AGO
KRQE News 13

Albuquerque event will reward participants that turn in their guns

Looking to get rid of your firearm?
2 DAYS AGO
KRQE News 13

If you live on ABQ’s west side, you might be able to be a temporary legislator

ALBUQUERQUE, N.M. (KRQE) – Bernalillo County is looking for someone to fill in as a legislator until the end of the year. Residents of District 16, on Albuquerque’s west side, who are over 21 years old are eligible. Former Representative Antonio “Moe” Maestas recently resigned from representing the district in order to serve as a state senator. […]
2 DAYS AGO
KRQE News 13

Authorities are responding to a shooting.
2 DAYS AGO
KRQE News 13

ALBUQUERQUE, N.M. (KRQE) – The Albuquerque Police department is investigating a crash involving a pedestrian and a vehicle Friday. Police say the crash happened near Montgomery Blvd. and Carlisle Blvd. The pedestrian was taken to the hospital and is in critical condition according to APD. Police say the driver remained on scene. No other information has been […]
3 DAYS AGO
KRQE News 13

According to the DA's office, before the new program, Santa Fe County had DWI conviction rates ranging from 30% to 40%
22 HOURS AGO