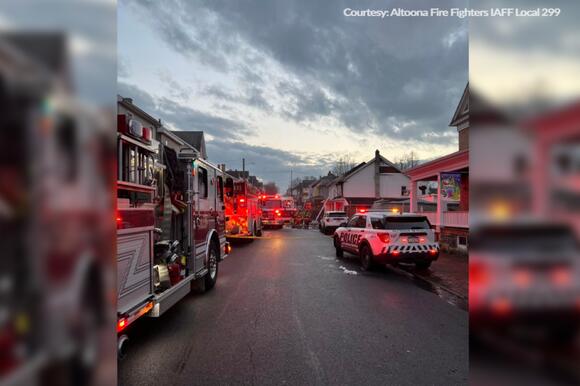 ALTOONA, Pa. (WTAJ)– Crews made quick work of an Altoona fire that broke out Thursday afternoon that left two firefighters with minor burns.

According to the Altoona Fire Fighters IAFF Local 299 Facebook , at 3:47 p.m. crews were dispatched to 622 2nd Avenue for a report of a working fire. It was also reported that there was entrapment but results turned up negative after firefighters conducted a search.

The fire was extinguished within ten minutes of arriving at the scene. According to the Facebook post, “heavy fire” was found on the second and third floor which sustained a lot of damage.

Bystanders save numerous animals, but not all from Centre County shed fire

CENTRE COUNTY, Pa. (WTAJ)– A fire on Friday in Centre County killed some animals, but thanks to a group of bystanders, some were saved. Crews were called to the 900 block of Jacksonville Road in Bellefonte for a reported building fire. After arriving, crews saw a shed that was engulfed by flames. Bellefonte Fire Company […]
CENTRE COUNTY, PA・17 HOURS AGO
WTAJ

CAMBRIA COUNTY, Pa. (WTAJ) — Crews were called to the scene of a house fire in Reade Township on Thanksgiving. According to emergency dispatch, the fire happened just after 4 p.m. on the 100 block of Lidwell Road. It’s reported that 6 different departments responded, including EMS. Ashville Volunteer Fire Company, who assisted Reade Twp. […]
CAMBRIA COUNTY, PA・1 DAY AGO
WTAJ

Centre County woman dead after crash on I-80

CLINTON COUNTY, Pa. (WTAJ)– A woman from Centre County died after a Monday crash on Interstate 80, state police said. Troopers were called at 4:29 p.m. to the scene near mile marker 185 on I-80 going west where 41-year-old Jamie Goodyear, of Bellefonte, was found deceased after she crashed her 2012 Jeep Compass, according to […]
CENTRE COUNTY, PA・19 HOURS AGO
WTAJ

ALTOONA, Pa (WTAJ)– We hear the term Black Friday, but what about Brown Friday? This term is an unofficial holiday for plumbers as it’s one of their busiest days of the year. Brown Friday is the day after Thanksgiving when plumbers get more calls due to multiple drain problems from the holiday. That happens because […]
ALTOONA, PA・2 DAYS AGO
WTAJ

BEDFORD COUNTY, Pa. (WTAJ)– Christmas is next month and Bedford County is getting the community in the spirit with its traditional “Holiday Nights of Lights.” Happening from Thanksgiving to New Year’s on weekends and certain dates, folks have the chance to experience the Christmas-themed lights in the community in a car ride that lasts over […]
BEDFORD COUNTY, PA・21 HOURS AGO
WTAJ

BLAIR COUNTY, Pa. (WTAJ)– Blue Knob All Seasons Resort on top of Pennsylvania’s highest skiable mountain will be holding its fifth “Merry On the Mountain” event. The resort in Claysburg will hold the event on Saturday, Dec. 3 from 4:30 p.m. till 8 p.m. at the Blue Knob Conference Center There are many indoor and […]
CLAYSBURG, PA・15 HOURS AGO
WTAJ

How to donate your deer, elk to feed those in need locally

CLEARFIELD COUNTY, Pa. (WTAJ) — The 2022 Pennsylvania rifle hunting season begins Saturday, November 27 and in Woodland, a butcher is taking deer and donating the meat to those in need.  According to Hunters Sharing The Harvest one deer can provide up to 200 meals.  The Country Butcher was able to donate 634 pounds of […]
WOODLAND, PA・17 HOURS AGO
WTAJ

Centre County area EMS to disband after decades of service

CENTRE COUNTY, Pa. (WTAJ)– A Centre County emergency medical service announced that they will soon be disbanded, citing a lack of staffing which has been affecting many others in the area. Port Matilda EMS posted to Facebook Monday, that the choice to disband services was “not made easily and not without a lot of regret.” […]
CENTRE COUNTY, PA・3 DAYS AGO
WTAJ

ALTOONA, Pa (WTAJ) — The Altoona Amtran is looking to give back to the community this holiday season as they host a “Stuff the Bus” event. Amtran’s goal is to help feed families in Blair County by collecting nonperishable foods for those in need. All donations will go to the Altoona Food Bank and the […]
ALTOONA, PA・2 DAYS AGO
WTAJ

ALTOONA, Pa. (WTAJ) — Amtran will be helping fight hunger this holiday season by collecting food donations through its Stuff the Bus events. The first is scheduled for Saturday, Nov. 26 at the Weis Markets parking lot in the Park Hills Plaza where residents can bring non-perishable food items to donate from 1 p.m. to […]
ALTOONA, PA・19 HOURS AGO
WTAJ

Search underway for suspects that broke into Everett business, stole slew of items

BEDFORD COUNTY, Pa. (WTAJ) — State police are looking for leads on a burglary that took place Tuesday at Price’s Mostoller Tarps in East Providence Township. On Nov. 22 between 2 and 4 a.m., unknown suspect(s) forced their way into the manufacturing business and stole multiple items, which include but are not limited to: Torch […]
EVERETT, PA・1 DAY AGO
WTAJ

JEFFERSON COUNTY, Pa. (WTAJ) — The Brookville Area Chamber of Commerce will be hosting a Chamber Mixer later in December. The mixer will be held at the Rebecca M. Arthurs Memorial Library at 223 Valley Street on Thursday, Dec. 15. The event will showcase a variety of resources that are offered by the library that […]
BROOKVILLE, PA・20 HOURS AGO
WTAJ

CLEARFIELD COUNTY, Pa (WTAJ) — The windmill superload will continue its travel through Clearfield County after taking a break during the Thanksgiving holiday, according to the Pennsylvania Department of Transportation (PennDOT) With the superload continuing to move throughout the area, PennDOT said the following routes would be affected by the superload’s movements. Route details are: […]
CLEARFIELD COUNTY, PA・2 DAYS AGO
WTAJ

BLAIR COUNTY, Pa. (WTAJ) — Two Tyrone men were locked up after being spotted by Tyrone Borough police officers and reportedly found with nearly 5,000 packets of heroin, meth, and a gun. Tyrone police report that they spotted a vehicle on the 1000 block of Pennsylvania Avenue on Wednesday, Nov. 23, that they recognized as […]
BLAIR COUNTY, PA・18 HOURS AGO
WTAJ

ALTOONA, Pa (WTAJ)—The furry friends at the Central PA Humane Society were treated to a Thanksgiving meal thanks to the kindness of an Altoona family. Bill Sell has been cooking a Thanksgiving treat for the dogs at the shelter for five years. This hearty, healthy meal is something he cooks for his three dogs. This […]
ALTOONA, PA・1 DAY AGO
WTAJ

(WTAJ) — This weekend, Small Business Saturday will take place in different areas across Central Pennsylvania to help support local businesses while crossing off your holiday shopping list. Starting in Centre County, shoppers at small businesses in Bellefonte can purchase a tote bag and collect unique pins from each location. Those who collect at least […]
CAMBRIA COUNTY, PA・2 DAYS AGO
WTAJ

CLEARFIELD COUNTY, Pa (WTAJ) – The Pennsylvania Department of Transportation (PennDOT) is inviting the public to an open house to discuss and view the plans for the River Road Bridge project. Project plans and pertinent information will be on display Tuesday, December 6 from 5 p.m. to 7 p.m. at the Lawrence Township Municipal Building. […]
CLEARFIELD COUNTY, PA・3 DAYS AGO