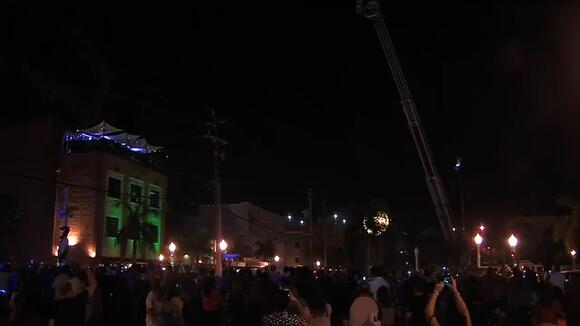 Thousands are expected to gather in downtown Fort Myers on Friday, but medical experts warn there is a risk of exposure to COVID-19 if you don’t follow some safety measures.

Organizers of the annual New Year’s Eve ball drop expect 20,000 people to crowd into downtown but with Omicron spreading so quickly some are having second thoughts while others said they’re over it.

Anthony Casucci said he wants to live his life and be cautious at the same time. Linda Thielvar and her husband have a table for nine booked downtown and plan to celebrate with family and friends.

“We’re done and over the virus,” she said. “It’s a thing of the past in our minds. It’s in God’s hands right now.”

Others, however, still see COVID-19 as a clear and present danger with hospitalizations and cases increasing.

“We’re being very careful,” Lalovich said. “There are four of us down here and we’re staying in our own little circle.”

Despite 20,000 people crowding into the downtown, Mayor Kevin Anderson insists the event is safe.

“This is going to be spread out over several blocks to the point where you don’t have to be shoulder to shoulder with people to enjoy the music,” Anderson noted.

But he issued a warning to anyone not quite feeling well who may be thinking about going anyway.

Douglas Thielvar said he understands the new variant as nothing more than just a bad cold.

“That’s my take on it right now and that’s how I’m going to live my life,” he stated.

Lee Health ER Doctor Timothy Dougherty warned folks like Thielvar not to underestimate what COVID-19 can do to the body explaining it is not a mild cold symptom. He explained it can be deadly and no one can be sure how their body will react to the virus.

“Attending any venue outside already increases your safety,” said Dr. Dougherty. “I would still try to wear a mask and stay close to people you’re familiar with.”

“We’re just going to stay within our own apartment and just enjoy New Year’s very quietly,” he concluded.

Overall safety is a concern too. There will be dozens of police officers on hand.

The city will also be monitoring all downtown cameras.

The ball drops at midnight with fireworks to follow.