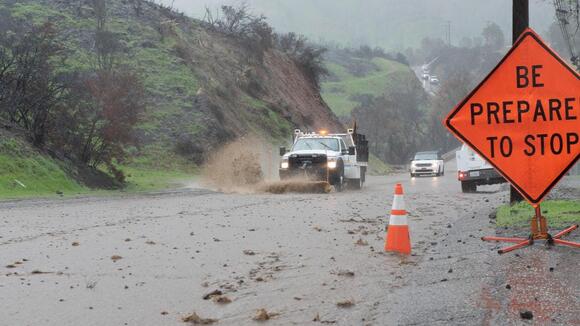 LOS ANGELES (CNS) - Intense rains poured over most of the Southland Thursday, prompting mudslides, debris flows and flooding that made for a messy morning drive that was fortunately light due to the approaching holiday weekend, which forecasters said is still on track to be dry.

Snowfall forced the closure of Interstate 5 through the Grapevine early Thursday morning in northern Los Angeles County, while a mudslide blocked traffic and trapped some vehicles on Coldwater Canyon Avenue in Studio City, and flooding blocked the westbound Santa Monica (10) Freeway near the McClure Tunnel in Santa Monica.

In Malibu, more than four dozen people had to be evacuated from Leo Carrillo State Beach campground due to flooding, which also led to closures on Pacific Coast Highway. Decker Road was closed at PCH due to multiple rockslides, according to the city, which also reported multiple instances of downed trees blocking roadways. PCH was also closed at Puerco Canyon due to flowing mud.

A stretch of PCH was closed in Pacific Palisades due to a fallen tree that brought down power lines, according to Caltrans.

Overnight, Mulholland Highway was closed in the Santa Monica Mountains between Las Virgenes and Cornell roads due to mud that inundated the roadway.

Downpours continued through the morning, but the rain began to taper off during the afternoon, despite continued cool and foggy conditions. Forecasters said light rain would continue to fall into the evening, but the storm system was making its way south. The National Weather Service indicated by mid-afternoon that another one-half to one inch could still fall across the area, winding down an unusually wet month.

"Once this is all done tonight the official NWS observation site in downtown Los Angeles will have had its third most wettest month of December on record with records going back to 1877," according to the NWS. "The wettest December was in 1889 with 15.80 inches and the second wettest was in 2010 when 10.23 inches was recorded."

By 10 a.m. Thursday, downtown Los Angeles had received 3.6 inches of rain over the previous 24 hours, according to the weather service. At Leo Carrillo, where campers had to be rescued from flooding, 4.5 inches had fallen, while 4 inches fell in Bel Air, 5.3 inches fell in Woodland Hills and more than 3 inches fell in Alhambra and Pasadena.

A winter storm warning will remain in effect until 8 p.m. Thursday in the Los Angeles County mountains, excluding the Santa Monica range. Many mountain areas had received more than a foot of snow by mid-afternoon, with smaller amounts in lower elevations.

The snow that forced the closure of the Grapevine tapered off by early afternoon, and the freeway was reopened around 3:30 p.m.

According to the NWS, roughly 18 inches of snow had fallen in the eastern San Gabriel Mountains by mid-morning Thursday, with 3 to 6 inches falling in Frazier Park.

Stretches of Angeles Crest Highway were closed due to the poor weather conditions during the storm, along with state Route 39.

Caltrans reminded motorists that chains were required on the Angeles Crest Highway north of La Canada Flintridge, and the agency urged motorists to be aware of road conditions and anticipate possible closures due to snow.

Gusting winds were also impacting the Antelope Valley, where the NWS issued a wind advisory through 10 p.m. Forecasters said the area should expect winds of 15 to 30 mph, with gusts up to 45 mph, potentially reducing visibility for motorists and blowing dust across roadways.

In Orange County, a mandatory evacuation order that was in effect for the Silverado, Williams and Modjeska canyon areas in the Bond Fire burn area due to fears of possible debris flows was downgraded Thursday morning to voluntary, then lifted altogether by early afternoon.

The NWS issued a flash flood watch for Orange County coastal and inland areas and the Santa Ana Mountains, including the Bond Fire burn area. The watch was expected to be in effect through Thursday afternoon, but it was canceled by midday, with forecasters saying flooding "is no longer expected to pose a threat."

NWS forecasters for Orange County said the area could receive up to 2.5 inches of rain along the coast and as much as 6 inches in the mountains below 5,000 feet, with hourly rainfall amount of 0.6 to 0.7 inches possible.

A flash flood watch will continue until 4 p.m. for Los Angeles County burn areas from the Lake, Bobcat, Dam and Ranch 2 fires, although the risk of flooding was diminishing.

The intense rains forced the closure of Six Flags Magic Mountain in Valencia. Knott's Berry Farm in Buena Park closed at 1 p.m. due to the downpours.

While conditions were expected to remain cool, forecasters said things will dry out for the holiday weekend. But winds will be a factor in some areas.

"Dry but continued cool weather is expected Friday through the upcoming holiday weekend and likely beyond," according to the NWS. "Gusty northerly winds are expected Friday in some mountain and foothill areas, with weak to moderate Santa Ana winds over the weekend.

Santa Ana winds are expected to dissipate Friday, but a red flag warning of critical fire conditions will remain in effect until 11 a.m. According to the National Weather Service, winds will taper off by late morning.
SANTA ANA, CA・6 DAYS AGO
KNX 1070 News Radio

A collision between a motorcycle and a car in Van Nuys left one person dead Tuesday.
LOS ANGELES, CA・1 DAY AGO
KNX 1070 News Radio

A man was taken into custody today after climbing the exterior of a hotel in the downtown Los Angeles area. Authorities went to the 900 block of West Olympic Boulevard shortly before 9 a.m., according to the Los Angeles Police Department
LOS ANGELES, CA・2 DAYS AGO
KNX 1070 News Radio

Overdose deaths attributed to the synthetic opioid fentanyl skyrocketed in Los Angeles County over a five-year period ending in 2021, with such fatalities increasing by 1,280%, according to a report by the county Department of Public Health.
LOS ANGELES COUNTY, CA・1 DAY AGO
KNX 1070 News Radio

A mid-trial tentative settlement has been reached in a lawsuit filed against the city of Los Angeles by a former city librarian who alleges she was wrongfully shot in the left hip by an LAPD officer at her Silver Lake home in 2017.
LOS ANGELES, CA・2 HOURS AGO
KNX 1070 News Radio

Southern California Edison shut off power to 5,872 customers in Riverside County on Thanksgiving Day due to a high risk of wildfire caused by gusty winds and low humidity.
RIVERSIDE COUNTY, CA・6 DAYS AGO
KNX 1070 News Radio

Around a dozen protesters were kept from entering the Los Angeles City Council meeting today due to what police claimed was the chamber reaching capacity.
LOS ANGELES, CA・2 DAYS AGO
KNX 1070 News Radio

The Los Angeles City Council approved a pay raise Tuesday for hundreds of workers at the Los Angeles Department of Water and Power. Ten bargaining units under the International Brotherhood of Electrical Workers will receive the new contract.
LOS ANGELES, CA・1 DAY AGO
KNX 1070 News Radio

Firefighters contained a fire that occurred inside a 13-story high-rise building in downtown Los Angeles. It happened at 112 W 5th Street, according to the Los Angeles Fire Department.
LOS ANGELES, CA・8 DAYS AGO
KNX 1070 News Radio

The widow of a late El Monte police sergeant announced the filing today of a $25 million claim against Los Angeles District Attorney George Gasco stemming from the ambush death of her husband and his partner in June.
EL MONTE, CA・2 DAYS AGO
KNX 1070 News Radio

A multi-convicted DUI offender accused of killing an off-duty Riverside County deputy and his daughter in a driving under the influence wreck north of San Jacinto pleaded not guilty to two counts of second-degree murder and other charges.
RIVERSIDE COUNTY, CA・2 DAYS AGO
KNX 1070 News Radio

Three people were found dead in a Riverside residence after a fire today. Police were responding to a report of suspicious circumstances on Price Court around 11 a.m. Friday, according to The Press Enterprise.
RIVERSIDE, CA・5 DAYS AGO