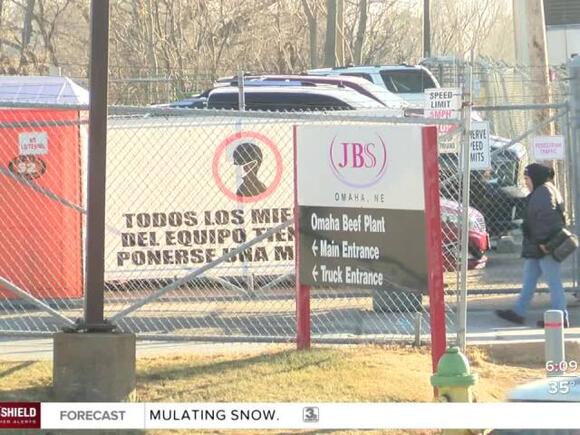 It was a day with extremely high winds, trees coming down and small tornadoes in Nebraska and Iowa.

While many in the area took shelter, a complaint by the union that represents federal food inspectors in the Omaha-area claims inspectors were not given shelter; instead, they remained on the floor of three meatpacking plants in Omaha and another in Crete.

“This storm, they had two to three hours' notice that it was coming and they chose to do nothing,” said Eric Rothell, president of the union that represents federal inspectors in southeast Nebraska.

During the derecho, which occurred on Dec. 15 with numerous tornadoes reported in Nebraska and Iowa, thoughts of the recent tornadoes in Kentucky passed through Rothell’s mind.

Several employees at various businesses died in Kentucky and Illinois when they were left to work during a December storm, which occurred less than a week before the one in Nebraska and Iowa.

“Because of what happened down in Kentucky, and because of the warning they had with this storm, to allow this and not remove our people was a bad thing. It shouldn’t have happened,” said Rothell.

A report filed with federal regulatory agency OSHA, claims dozens of inspectors were left on the floor of four meatpacking plants in Nebraska, and says the USDA should have instead taken them to shelter due to storm sirens sounding because of severe wind warnings.

Zach Wickersham, who was inspecting one of the Omaha plants at the time, says his supervisor consulted agency management when the threat began.

“Ultimately, they decided to do nothing,” said Wickersham.

“When something is really off like that, you would think they would want to take it a bit more seriously.”

It appears that OSHA may have already dismissed the incident.

The federal agency did not respond to calls and a voicemail on Thursday, but a voicemail message that Rothell received seems to be an OSHA employee stating after a USDA investigation: "It looks like they did put everybody into the storm shelter and followed protocols, so I’m going to go ahead and close that."

Wickersham said he was never contacted by anybody for an investigation.

“I was expecting to be contacted by somebody from OSHA and never did,” said Wickersham.

“The kind of impression I’m getting on this is one agency is taking care of another agency and trying to push it all under the rug.”

When asked about the incident by 3 News Now, Nikki Richardson with JBS said they did not evacuate their employees but that, "We were prepared to suspend operations if and when a 'warning' was declared, which occurred after we ended production for the day. Had the weather event escalated more quickly than it did, we would have immediately sheltered our team members inside the facility."

In other words, OSHA said all four plants got people into storm shelters while JBS said they would have sent workers to shelters if the storm worsened.

A spokesperson for the food safety and inspection service told 3 News Now it was tough to get clear answers due to the holidays, but said in a statement during severe weather “supervisors implement the necessary actions required to keep our employees out of harm’s way.”

Both inspectors just want the problem solved before next time could be even worse.

“These packing houses are dangerous to work in. You’ve got knives, you’ve got carcasses hanging from the ceilings and we could have easily lost someone’s life if a tornado would have hit here,” said Rothell.

The four plants included in the complaint are JBS, Greater Omaha Packing and Nebraska Beef in Omaha, and Smithfield Foods in Crete.

The union tells 3 News Now this is not the first time something like this happened and if OSHA ultimately does nothing, their next steps may be to talk to their congress members.

Pursuit for funds from deceased Lincoln businessman expands to Iowa

Investigators with the Labor Department visited three plants owned by JBS and Turkey Valley Farms in Nebraska and Minnesota this fall and found 31 underage workers as young as 13.
NEBRASKA STATE・1 DAY AGO
KMTV 3 News Now

A new report suggests that manure-laced litter, removed from chicken barns raising millions of chickens for Costco, is increasing contamination of some nearby streams in eastern Nebraska.
NEBRASKA STATE・1 DAY AGO
KMTV 3 News Now

Why Omaha is getting more dense and how neighbors fight back

City leaders believe as the city grows the solution is to build up on the land the city does have, but neighbors don't always want new development.
OMAHA, NE・1 DAY AGO
KMTV 3 News Now

The City of Omaha is running into a hurdle on its street car project as the MUD said this week that gas and water rates will go up if the city doesn’t help pay to replace lines along the route.
OMAHA, NE・16 HOURS AGO
KMTV 3 News Now

With less affordable housing available in Omaha, Habitat for Humanity of Omaha is using ARPA funds to expand options over the next few years. One neighbor is eager to welcome new neighbors next door.
OMAHA, NE・1 DAY AGO
KMTV 3 News Now

As the city grows, so do complaints, with many Omaha residents telling the city they don’t want a new apartment building in their backyard.
OMAHA, NE・2 DAYS AGO
KMTV 3 News Now

The target of a state banking investigation into alleged fraudulent loans was in the process of building a multimillion-dollar residential complex on the eastern edge of the Capital City.
LINCOLN, NE・2 DAYS AGO
KMTV 3 News Now

The meeting started with hearing from those arguing for and against bond money to get the street car project underway.
OMAHA, NE・1 DAY AGO
KMTV 3 News Now

The man suspected of kidnapping 43-year old Cari Allen has been arrested. Two former friends of his paint a picture of what this man is like.
OMAHA, NE・16 HOURS AGO
KMTV 3 News Now

Whether it's relieving stress or simply having a good time, local skaters share what draws them to the UNMC Ice Rink.
OMAHA, NE・1 DAY AGO
KMTV 3 News Now

The Douglas County Health Department reported that the number of reported cases of influenza has increased quickly over the last several weeks.
DOUGLAS COUNTY, NE・22 HOURS AGO
KMTV 3 News Now

Some Omaha Public School students will have to find a new way to get to school after the district announced it would adjust who is eligible for bus transportation.
OMAHA, NE・1 DAY AGO
KMTV 3 News Now

The cruiser was unveiled during a ceremony at the Omaha National Cemetery. Sarpy County Sheriff Jeff Davis said the date and location were no accident.
SARPY COUNTY, NE・12 HOURS AGO
KMTV 3 News Now

The Douglas County Health Department on Thursday reported 462 new positive COVID-19 tests were received since its last release on Monday. There have been 173,587 positive cases since March 2020.
DOUGLAS COUNTY, NE・6 DAYS AGO
KMTV 3 News Now

According to the Nebraska Department of Transportation, a crash on the northbound, I-680 exit ramp to W. Dodge Road westbound has been cleared.
OMAHA, NE・17 HOURS AGO