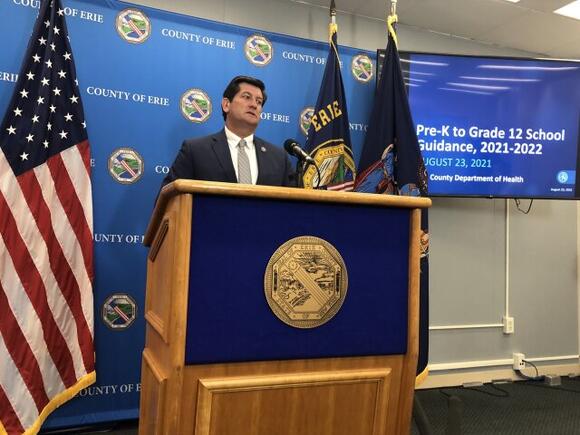 On Tuesday, outgoing Erie County Comptroller Stefan Mychajliw released a statement saying “Dr. Gale Burstein has been paid a combined total of $336,148 in overtime and comp time for 2020 and 2021.”

According to the actual report, that is not 100% accurate. It details that is the total amount of overtime, comp time and holiday paid through her entire tenure as heath commissioner, which began in 2012.

The Poloncarz Administration says she is not a salaried employee and is entitled to all of it.

In its report this week, the comptroller’s office accused Dr. Burstein of not being eligible to collect that money.

Hogues says Dr. Burstein is not a salaried employee, even though her salary is a fixed rate. She is set to make more than $209,000 in base pay in 2021. Dr. Burstein is considered by the county as a “managerial confidential” employee, required to work a minimum 40 hours a week to get paid.

Hogues says Dr. Burstein gets paid an hourly rate and therefore is eligible for overtime. He says prior to the pandemic, it was encouraged these managerial employees not collect overtime but he says the pandemic changed that.

He pointed to a 2010 budget resolution passed by the county legislature at that time that states managerial employees are to follow the CSEA contract. In the CSEA contract, there is a line that reads anyone who is required to have a medical degree as part of their job would not be allowed to collect overtime.

Buehler : “We heard from the County Executive she is not a CSEA member but still follows the contract.”

Buehler : “The CSEA Contract says someone who’s required to have a medical degree as part of their job is not eligible for overtime.”

Hogues: “And so once again there are portions of that CSEA contract that we follow there are certain carve-outs that we do not follow and that were not spelled out in the 2010 legislative decision that took place at the county legislature, and so once again we would be in violation if we did not pay our employees overtime for hours that they worked according to the Fair Labors Standard Act.”

Hogues says it was unreasonable to expect managerial employees such as the health commissioner to work standard 40-hour work weeks during the pandemic because of the severity of the situation.

The county executive’s office tells 7 Eyewitness News the overtime figures stated in the comptroller's report are not accurate. We have asked the county executive's office to provide us with its own overtime figures for the health commissioner. A spokesperson says they are still looking into it and will send the OT numbers for all county employees when he receives it from personnel.

The Erie County Legislature has had this issue of overtime for managerial confidential employees on the docket since July 2020, but it has never been followed up on. Minority leader Joe Lorigo says it was scheduled to be discussed but postponed.

We reached out to democratic majority leader April Baskin's office about this as well and are waiting to hear back.

Could have purchased a lot of Covid test with that money. New York is full of crooks. Yet all the money she received Erie county continues to have the highest rate for Covid. Doesn’t seem like she knows what she’s doing

Rise in RSV cases in WNY

BPS: Teachers union asks for a vote of no confidence in the superintendent

Hochul announces request for proposals to redevelop Terminal A

The main terminal has been vacant for years and the governor's office said proposals are due by 8 p.m. on March 30, 2023.
BUFFALO, NY・2 DAYS AGO
WKBW 7 News Buffalo

Why is the NYS Thruway Authority proposing toll hikes?

The New York State Thruway Authority is marking the first step in a long process on Monday when they'll vote on whether they want to move forward with proposed toll hikes.
3 DAYS AGO
WKBW 7 News Buffalo

A spokesperson for the Erie County Sheriff's Office confirmed to 7 News that the inmate died on Sunday.
ERIE COUNTY, NY・3 DAYS AGO
WKBW 7 News Buffalo

988 wait times have been a growing concern for many, including a Lockport woman's friend. Her friend was in desperate need of help on Sunday.
LOCKPORT, NY・4 DAYS AGO
WKBW 7 News Buffalo

The Erie County District Attorney's Office announced that a 16-year-old girl from Buffalo pleaded guilty to one count of second-degree assault on Thursday.
BUFFALO, NY・1 DAY AGO
WKBW 7 News Buffalo

A head-on vehicle accident in Newfane has sent one person to the hospital, according to the Niagara County Sheriff's Office.
NEWFANE, NY・1 DAY AGO
WKBW 7 News Buffalo

A former dog daycare worker in Buffalo has been sentenced to jail time for beating a dog to death in August 2019.
BUFFALO, NY・3 DAYS AGO
WKBW 7 News Buffalo

Buffalo police say the victim of a Thursday night shooting on Military Road has been charged with criminal possession of a weapon and unlawful possession of certain ammunition feeding devices.
BUFFALO, NY・2 DAYS AGO
WKBW 7 News Buffalo

Erie County DA John J. Flynn announced Friday that a jury found a Buffalo man guilty of one count of assault in the first degree and one count of criminal possession of a weapon in the second degree.
BUFFALO, NY・1 DAY AGO
WKBW 7 News Buffalo

A Rochester man has pleaded guilty to a weapon charge in connection to an incident at an anti-gun violence event in Buffalo in June.
BUFFALO, NY・4 DAYS AGO
WKBW 7 News Buffalo