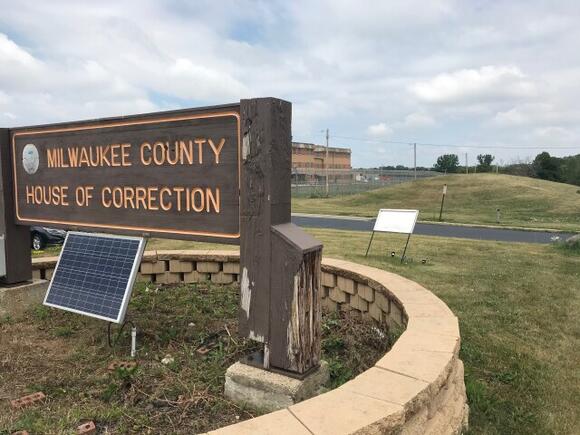 As a spike in positive COVID-19 cases due to the Omicron variant continues, the Milwaukee County House of Correction is seeing an outbreak among its residents.

"It's a significant challenge that everyone here at the House of Correction, the staff, the volunteers and the residents, are safe throughout this pandemic," Assistant Superintendent David Rugaber said.

Rugaber and the HOC have kept the residents relatively safe from COVID since the beginning. There have been three spikes; once in the beginning, a second around this time last year and now. Rugaber says last year's spike was due in large part to the HOC accepting positive transfers from other facilities. This year though, transfers are down and Rugaber feels the spike is due to the highly contagious Omicron variant, faulty testing and the number of asymptomatic cases they're seeing.

"What we think happened, is that there was a false-negative test," Rugaber said. "Where this individual was positive and, this is going to happen. We're giving out several hundred tests weekly. It's bound to happen where a test is going to have a false reading and we believe that's what happened. It's difficult to contain the virus when a large number who test positive are asymptomatic. It takes a trained eye by medical and security staff to see if someone has the virus. If a resident is complaining of a lack of taste or smell. Sometimes, residents are hesitant to acknowledge that they have symptoms."

A Michigan Doctor estimated up to one in five tests may come back with a false-negative .

Rugaber detailed a strict set of protocols the HOC has had in place since the start to ensure a breakout wouldn't happen. With transfers, those individuals would have to be in custody for at least 5 days and have a negative COVID test within 48 hours of transferring to the HOC. Then, that person was put into a quarantine unit where no one was allowed in or out for 14 days, while constantly being monitored by health staff. Two days before teh end of the quarantine, they'd be tested again to make sure they don't have the virus. If all of those are negative, that person is transferred into general population.

Also, at the HOC, Rugaber points out that it doesn't look like a jail in the movies with individual cells for each person. It's a communal living space; bunk beds fill a large room with tables, phones, showers and other areas used as a commingled living space. So if Rugaber's hypothesis of a faulty negative test is correct, he feels it would be near impossible to stop the spread.

"They eat at the same tables," Rugaber said. "They sit together. The officers are in housing units with them. One of the ways to combat COVID-19 is to socially distance. We don't have that option over here. That makes it extremely challenging and difficult."

Rugaber says they've also limited the number of residents in an individual pod. While they typically hold up to 60 to 70 residents, they're currently reduced to 40 to allow the residents more room to stay as distanced as possible.

Another concern is the ever changing number of vaccinated and unvaccinated individuals inside the facility. As of October, all staff must be vaccinated unless they have a medical or religious exemption. As of December, 93.2 percent of HOC staff are fully vaccinated. Rugaber also says anyone else who enters the facility, like contractors, medical staff, food service industry members, volunteers, or anyone else, must be fully vaccinated.

While the HOC can control those numbers, they can't control the vaccination decisions of the residents who come into their facility. They offer incentives like a $50 stipend into a trust account for the residents who do get vaccinated. However, it's still ultimately the decision of the resident. Add in a constantly rotating roster of residents; folks coming in to serve new time while others are leaving after finishing their sentence. It results in an ever-changing percent of vaccinated residents.

Overall, since April of 2021, the HOC has averaged about 49.6 percent vaccination rates at any given time.

"I think we're currently about 59 to 60 percent fully vaccinated for residents," Rugaber said. "The high vaccination rate has helped mitigate somewhat. As far as those who are symptomatic of severely symptomatic, we don't have anyone hospitalized because of COVID. We're happy about that."

The HOC is taking more steps to limit the spread. They have stopped taking transfers from other facilities, except for the Milwaukee County Jail. They will continue to do so once the numbers go down to a satisfactory level. Rugaber says they currently have 54 positive cases so they could start accepting transfers from the state again soon.

In addition, all residents are given two surgical masks per week and Correctional Officers wear KN95 masks in general population units and N95 masks in COVID positive units.

Residents have also had some of the residents' activities reduced. They have paused programming activities like job readiness classes, Alcohol and Drug Abuse therapy sessions and educational services, like the parnterhsip the HOC has with MATC. While Rugaber points to reducing recidivism rates is one of the most important resources at the HOC, he says the health and safety of residents and staff is paramount. They powerwash heavily trafficked areas regularly. A UV-C robot will clean and disinfect other areas and they have negative air-pressure within the pods, meaning the air in the pods is not circulated.

Rugaber says by early 2022, the HOC will have better disinfecting protocols than medical care facilities in the area. These efforts, he says, are to ensure the safety of every single person, incarcerated or not, who comes through the doors of the HOC.

"Core functions must go on," Rugaber said. "Employees have to report to work, they have to get residents to court and continue that function as well. That's our main challenge is trying to maintain what we're doing every day but doing it in a safe way."

Aurora Health Care will increase the cost for hospital-room stays in 2023 by 5.3% to 5.5% depending on the location in the Milwaukee area.
MILWAUKEE, WI・23 HOURS AGO
TMJ4 News

#GivingTuesday: Give back to Milwaukee area nonprofits, groups

We've had Black Friday, Small Business Saturday and Cyber Monday. Now, those who want to give back are looking forward to GivingTuesday.
MILWAUKEE, WI・20 HOURS AGO
TMJ4 News

If it seems like every other person you know is sick you are not alone. Respiratory viruses are tightening their grip.
WEST BEND, WI・1 DAY AGO
TMJ4 News

Several local first-responders use Guardian Angel devices to make their presence known in big crowds or when they're on the side of the road.
WAUKESHA, WI・1 DAY AGO
TMJ4 News

Judge Jennifer Dorow, who became famous in Wisconsin as the presiding judge of the trial of Darrell Brooks, will officially announce she is running for Wisconsin Supreme Court on Wednesday.
WISCONSIN STATE・6 HOURS AGO
TMJ4 News

The man wanted by several different police departments for allegedly drugging and stealing from women at bars was spotted on Monday in Franklin, police say.
RACINE, WI・8 HOURS AGO
TMJ4 News

Looking for a job? You might be able to land one quickly with the Milwaukee County Sheriff's Office (MCSO). MCSO will host a "live" hiring event on Thursday, Dec 1.
MILWAUKEE COUNTY, WI・1 DAY AGO
TMJ4 News

Judge Jennifer Dorow, who presided over the Darrell Brooks trial, says she will make a decision about running for Wisconsin Supreme Court "in the coming days."
WAUKESHA, WI・1 DAY AGO
TMJ4 News

On Main Street in Racine, inside the doors of BePlush, a group of women is making their entrepreneur dreams a reality.
RACINE, WI・11 HOURS AGO
TMJ4 News

Patricia Lewis said in just four days this month, someone made two attempts on her life. She felt her last choice was to come to us with her story.
MILWAUKEE COUNTY, WI・2 HOURS AGO
TMJ4 News

A student at Greendale Middle School may face criminal charges after police say the person threatened to "shoot up" the school in a social media post.
GREENDALE, WI・8 HOURS AGO
TMJ4 News

The Milwaukee Police Department (MPD) requested the City of Milwaukee to file a civil lawsuit against a habitual reckless driver.
MILWAUKEE, WI・1 DAY AGO
TMJ4 News

Meet our Pawsitively Milwaukee Pet of the Week: Joaquin!