Spending New Year’s Eve at home? Here’s how to watch the Sydney fireworks – and what else is on TV 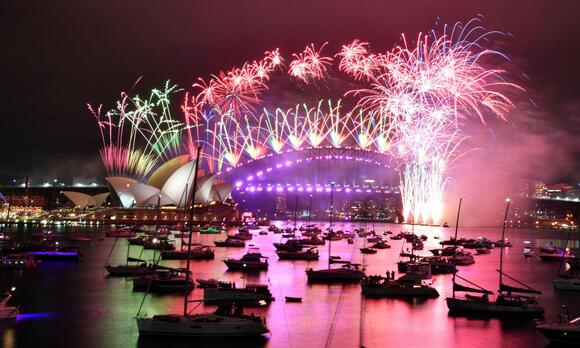 With Omicron surging around Australia, there’s good reason to veg out at home in front of the TV this New Year’s Eve and observe the outside world through this medium we call television. One day in the future, plugged into the metaverse, we’ll be astral projecting between virtual fireworks displays while high-fiving our digitally recreated long-dead ancestors, but for now we are still absorbing entertainment via moving images displayed on flat screens.

The humble old teev offers various ways to count down the new year, including fireworks displays, recaps and movies.

The Omicron variant of Covid-19 has caused many fireworks displays to be cancelled around the world, including one in Melbourne that would’ve involved more than 350 drones – which may or may not have become sentient mid-performance and decided to rise up against their human overlords. You never know, maybe we dodged a bullet.

Related: Australia’s New Year’s Eve may be a damp squib as revellers make their own Covid decisions

Many displays are still going ahead, continuing that great human tradition of creating colour and spectacle by making stuff explode in the sky. The ABC will be broadcasting several of them, including the Sydney fireworks at 9pm AEDT for those who can’t be bothered making it to midnight. ABC’s pre-fireworks shebang kicks off at 8.30pm with The Early Night Show, co-hosted by the charismatic actor Hunter Page-Lochard, who played the titular character in ABC TV’s Cleverman and most recently co-starred in Fires .

From 9.15pm, the ABC is broadcasting its NYE2021: Let’s Celebrate! concert at Sydney Opera House, hosted by Charlie Pickering, Zan Rowe and Jeremy Fernandez. Performers include Tina Arena, Missy Higgins, Casey Donovan and Genesis Owusu, taking you up to the countdown to midnight and more fireworks over Sydney harbour.

Alternatively, viewers in Victoria can tune into channel Nine to watch City Of Melbourne: New Year’s Eve 2021, which starts at 11pm and is hosted by Catriona Rowntree and Clint Stanaway.

I appreciate the “yearly recap” format – it reminds me of high school exam cheat sheets. My wife verbally summarised the appeal of the format when, while watching The Yearly with Charlie Pickering 2021 , she said “oh yeah, that’s right!” at least three times.

Pickering’s special this year contains several laugh-out-loud moments but, obviously filmed pre-Omicron, already looks dated, with Pickering appearing near the beginning of the show sitting in a fairly crowded (albeit masked-up) studio. Funny moments include a segment called the Real Premiers of Australia, which recaps the argy-bargy exchanged between Australian premiers as if it were a reality TV program.

For a more international perspective, Netflix has its very funny Death to 2021 special , a sequel to Death to 2020 . For snappier recaps, there’s Jimmy Fallon’s compilation of his “news smash” segments , this six-minute rewind of the year from Vox , and – shorter still – a two-and-a-half minute Reddit-produced video , which is set to an annoying upbeat ditty but, to its credit, begins with vision of geese wearing sombreros.

But, I hear you asking – nay, demanding – what about articles listing the very best Australian films and TV shows of the year? Here are a couple I prepared earlier: my lists of the best homegrown productions for both the big and small screen, featuring many hours of quality viewing.

Related: From The Newsreader to Wakefield: the 10 best Australian TV shows of 2021

The perfect film to watch during NYE is something with a bit of a party vibe, or at least something that isn’t a total downer – so, no Lars von Trier films allowed. On ABC iView there’s Firestarter: The Story Of Bangarra , a terrific documentary (No 4 on my list of the best Australian films of the year ) about the history of the amazing Bangarra Dance Theatre, which has been staging sumptuous visual and musical performances for decades.

Nine is screening Dirty Dancing at 8:30pm, fondly remembered as one of the pedigree dance-themed flicks of the 80s – the crop top-wearing, leg-flailing domain of Flashdance, Footloose, Fame and (my favourite of the bunch) Breakin’ 2: Electric Boogaloo.

For good family fun, NITV is screening Taika Waititi’s 2016 comedy Hunt for the Wilderpeople from 7.30pm. Elsewhere, SBS is showing The Blues Brothers at 9:25pm, The Full Monty is airing on Seven from 11pm and 9Gem is screening Ben-Hur from 8.30pm – with a running time of three-and-a-half hours, it’ll take up a good chunk of the night and get you over the finish line into 2022.

Those hankering for a blockbuster spectacle can tee up the handsomely cinematic Godzilla vs Kong , which recently landed on Netflix. And if you haven’t seen the excellent Danish comedy/drama Another Round, check it out on SBS on Demand .

Adelaide Oval might be the most handsome sporting arena in the world and it showcases a sunset like nowhere else in Australia. So before the sky lights up with fireworks, why not check out the Adelaide Strikers against the Sydney Thunder in the Big Bash League and the many cutaways to the multicoloured gloaming? It’s screening at 7:15pm AEDT on channel Seven, Kayo and Foxtel. – Jonathan Howcroft

How did we end up in a world where Trump wanders about doing whatever he wants and nobody is shocked?

Remember how horrified we all were when Trump became president and now it’s like noooo go away. Sign up here to get an email whenever First Dog cartoons are published. Get all your needs met at the First Dog shop if what you need is First Dog merchandise and prints.
2 DAYS AGO
The Guardian

A woman with Down’s syndrome has lost a court of appeal challenge over late-stage abortions of foetuses with certain health conditions. Heidi Crowter, who brought the case alongside Máire Lea-Wilson, whose son Aidan also has Down’s syndrome, had argued that allowing pregnancy terminations up to birth if the foetus has the condition is discriminatory and stigmatises disabled people.
2 DAYS AGO
The Guardian

Argentina’s conquerors are preparing to repeat the trick against Poland, at their quiet base 25 miles from their own border
2 DAYS AGO
The Guardian

Mother of London firefighter who killed himself welcomes damning report

Exclusive: Linda Francois, whose son Jaden Francois-Esprit was bullied in Wembley, says culture must change
1 DAY AGO
The Guardian

A Beijing court has sentenced the Chinese-born Canadian pop star Kris Wu to 13 years in jail after finding him guilty of crimes including rape, just over a year after his arrest in China, where he was born and built a lucrative career. The court in Chaoyang district said investigations...
2 DAYS AGO
The Guardian

Record number of Muslims elected in US midterms: ‘We should lean into who we are’

As final vote on raising council tax to tackle homelessness looms, some worry tourism will be affected if people sell up
2 DAYS AGO
The Guardian

Democrats, anti-racist groups and some Republicans criticize president for meeting Fuentes at dinner with Kanye West
FLORIDA STATE・1 DAY AGO
The Guardian

The Oscar-winning What A Feeling singer, who played Coco Hernandez in 1980’s Fame, died at her home in Florida, her publicist said
FLORIDA STATE・1 DAY AGO
The Guardian

Crime coverage on Fox News halved once US midterms were over

In the weeks leading up to the US midterm elections, the message from Fox News was clear: violent crime is surging, cities are dangerous hellscapes and Democrats are responsible. With the vote over, however, the rightwing news channel appeared to decide things weren’t that bad after all, and decreased its...
PENNSYLVANIA STATE・2 DAYS AGO
The Guardian

An Illinois resident won her case against the company Sterigenics – but other sufferers’ lawsuits hang in the balance
WILLOWBROOK, IL・1 DAY AGO
The Guardian

Company fires 2,700 workers while they were sleeping days before Thanksgiving

Russia-Ukraine war at a glance: what we know on day 276 of the invasion

More than 6m households in Ukraine are still affected by power cuts, two days after targeted Russian strikes on the country’s energy infrastructure, President Volodymyr Zelenskiy said. “As of this evening, blackouts continue in most regions [of Ukraine] and in Kyiv. In total, more than 6 million subscribers,” Zelensky said in his nightly address on Friday. The number of affected households had reduced “by half” since Wednesday. He said about 600,000 people were experiencing power cuts in Kyiv, the capital, with the Odessa, Lviv, Vinnytsia and Dnipropetrovsk regions also among the worst affected as temperatures approach freezing.
1 DAY AGO
The Guardian

How long can humans live? We ask an expert

Setting our upper limit at a mere 150 might sound daft 10,000 years from now, says Prof Richard Faragher
2 DAYS AGO
The Guardian

Trump’s act is ‘old and tired’, says his own former national security adviser

Nick Chubb scored on a three-yard touchdown run with 19 seconds left in overtime and Cleveland rallied on Sunday to stun Tom Brady and the Tampa Bay Buccaneers 23-17 in Browns quarterback Jacoby Brissett’s final start before Deshaun Watson returns from his suspension. Chubb powered through a pile of...
TAMPA, FL・3 HOURS AGO
The Guardian

Workers say conditions at Illinois facility haven’t changed since Steven Dierkes was incinerated in pot of molten iron in June
MAPLETON, IL・1 DAY AGO
The Guardian

Millions have watched Netflix hit Ancient Apocalypse, which is just the latest interpretation of an enduring tale. But in its appeal to ‘race science’ it’s more than merely controversial
15 HOURS AGO
The Guardian

49 people sentenced to death for mob killing in Algeria

An Algerian court has sentenced 49 people to death for the brutal mob killing of a painter who was suspected of starting devastating wildfires – but had actually come to help fight them, according to defence lawyers and the state news agency. The killing in 2021 in the Kabyle...
2 DAYS AGO