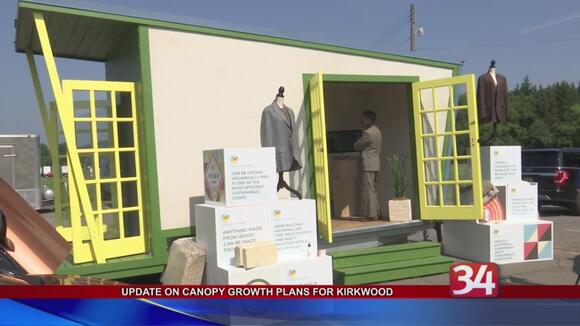 KIRKWOOD, NY – An international leader in the cannabis industry says it hasn’t abandoned plans to make Kirkwood the center of its operations making CBD and recreational marijuana products.

In 2019, it announced plans to purchase and renovate the former Felchar manufacturing plant in Kirkwood to produce CBD products after New York State gave the green light to industrial hemp.

Now, with New York State rolling out regulations to govern the new adult-use marijuana market, Canopy is setting up partnerships to produce and sell THC products in New York.

“I think that New York State is going to be a leader in the cannabis space, there’s no question in my mind that it will be. I’m very excited for, hopefully, sometime in the future for Canopy to get involved in it as well and bring a lot of the innovative products that we’ve got in Canada and other markets to the US market,” says VP for Global Government Relations David Culver.

Culver says Canopy has a variety of brands that it would like to bring to New York, including its flagship Tweed brand of cannabis and a Martha Stewart line of CBD gummies.

It also has agreements to acquire Wanna brands, a Colorado-based producer of edibles and Acerage Holdings, which already has a facility in Syracuse.

Culver says an architectural study is underway to determine the future of its facility on Pine Camp Drive.

Culver says extensive work has been done at the site which has yet to realize the 400 jobs it first promised.

“To be blunt, this has been a rather frustrating project. We announced the building, as you probably remember, in 2019. We have really had to slow things down for 2 major reasons. One is that the building itself was in a lot worse shape than we thought,” he added.

Culver says the other problem has been a lack of federal regulations for CBD products, causing many major retailers to refuse to sell them, thereby ruining the potential market.

The company is a strong supporter of legislation advanced by South Carolina Republican Congresswoman Nancy Mace that would set up a framework for marijuana legalization across the US.

Culver says Canopy would like to see marijuana regulated similarly to alcohol with many decisions left to the state level.

He also says his company is committed to efforts to keep marijuana away from children and to combat impaired driving.

The Southern Tier Independence Center is holding a friendly competition to test people's wit, and to raise awareness and funds for the organization's mission.
BINGHAMTON, NY・1 HOUR AGO
News Channel 34

Tri-Cities Airport in Endicott is getting help from the federal government in keeping its runway clear from snow.
ENDICOTT, NY・1 HOUR AGO
News Channel 34

Several local organizations are benefiting from what New York State calls its largest investment ever in the arts.
BINGHAMTON, NY・1 HOUR AGO
News Channel 34

VESTAL, NY (WIVT/WBGH) - A well-known auto group with locations across Broome, Chenango, and Susquehanna County is gearing up to help children in need this holiday season.
CHENANGO COUNTY, NY・4 HOURS AGO
News Channel 34

Akshar fights for state grants that were never received

Republican State Senator Fred Akshar is working to secure state funding that was promised to local organizations but never received before he leaves office at the end of the year.
BINGHAMTON, NY・4 HOURS AGO
News Channel 34

There has been a slight increase in Broome County COVID-19 cases since yesterday, but residents remain at a medium risk level for the virus.
2 HOURS AGO
News Channel 34

A new window of opportunity has opened up for adults who were sexually abused in New York State to receive judgment and compensation for their trauma.
BINGHAMTON, NY・1 HOUR AGO
News Channel 34

Yesterday, the Candor Emergency Squad announced that it received a grant from the Mildred Faulkner Truman Foundation.
CANDOR, NY・9 HOURS AGO
News Channel 34

Greek Peak Mountain Resort is gearing up for what it calls White Friday.
CORTLAND COUNTY, NY・3 DAYS AGO
News Channel 34

CHENANGO COUNTY (WIVT/WBGH) – A Kentucky company and its Vice President have admitted to illegally dumping old railroad ties in Chenango County, and then creating fake paperwork to cover it up. Cross Tie Disposal and its VP, 48-year-old Harold Young, arranged to dispose of the hazardous ties at a property in Chenango County instead of […]
CHENANGO COUNTY, NY・3 DAYS AGO
News Channel 34

Two Vestal High School musicians will be representing their district on the big stage this weekend.
VESTAL, NY・2 HOURS AGO
News Channel 34

Through a partnership with the City of Binghamton, the place-making office is holding a pop-up event at the Washington Street Mall on Court Street.
BINGHAMTON, NY・5 DAYS AGO
News Channel 34

A major downtown Binghamton street closure that has hurt local businesses has come to an end.
BINGHAMTON, NY・6 DAYS AGO
News Channel 34

Members of the fire department were standing out in intersection from 9 a.m. to noon collecting money for the Mercy House of the Southern Tier and the Retired Firefighters Cancer Fund.
ENDICOTT, NY・4 DAYS AGO
News Channel 34

Some more good news regarding students at another district who spent the day volunteering at a local food warehouse to become more well rounded.
VESTAL, NY・3 DAYS AGO
News Channel 34

Woman arrested with 95 bags of heroin in Cortland County

On the morning of November 25th, Cortland County Sheriff's Deputies responded to Frank's Place on Route 13 in Truxton for two females who were acting suspicious in the bathroom.
CORTLAND COUNTY, NY・1 DAY AGO