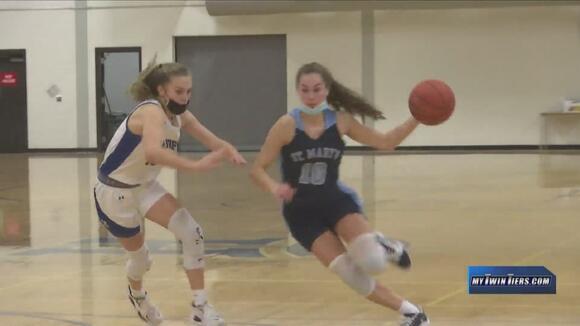 HORSEHEADS, N.Y. (WETM) – The Josh Palmer Tournament may not have happened this year but one game brought the drama.

In a game between two teams who were slated to play in the annual tournament, St. Mary’s out of the Buffalo region, mounted a major comeback beating the Blue Raiders 89-86 in double OT. The Palmer Tournament was canceled amid COVID-19 concerns but this game had some big time prowess on the floor.

Not only did Horseheads raise over $800 dollars for the Josh Palmer Fund in the fight against cancer, Penn State-bound guard Shay Ciezki did not disappoint. Ciezki scored 47 points to lead St. Mary’s and helped erase a 14-point first half deficit against the Blue Raiders.

Horseheads Molly Wolf hit a layup late in the final seconds of regulation sending the game into the first overtime. Then, Sophia Bonnell connected for two in overtime and help shutoff Ciezki in the extra session sending it to a second overtime.

In the end, St. Mary’s had just a little bit more to earn the hard-fought road win as Ciezki hit two free throws late in the final overtime. Horseheads Carly Scott had 23 points on seven three pointers. While teammates Eva Koratsis and Megan Wolf had 14 points each, new career-highs for both.

Horseheads will return to action after the holiday break on Wednesday, January 5 when the team hosts Corning.

Next year, there’s plenty of hope and optimism for the Josh Palmer Tournament to return for the first time in three seasons. Check out the full highlights and a recap of the Windsor Christmas Tournament from Thursday on 18 Sports.

ELMIRA, N.Y. (WETM) – Three local basketball standouts were honored by the Empire 8 on Monday. Horseheads grad and Alfred University’s Brewster Marshall along with Elmira College’s Bryan Adams were named Empire 8 CO-Player of the Week for men’s basketball. Marshall scored 29 points and had 11 rebounds in a win versus Pitt-Bradford. The graduate […]
HORSEHEADS, NY・1 DAY AGO
WETM 18 News

HORNELL, N.Y. (WETM) – A longtime coaching fixture in Section V is moving forward. Hornell High School football coach Erik Werner announced via the team’s official Twitter account that he will no longer be leading the program. The announcement comes on the heels of the Red Raiders’ (1-6) record this year and not playing in […]
HORNELL, NY・1 DAY AGO
WETM 18 News

ALTOONA, Pa. (WETM) – The Warriors are headed to the state semifinals for the second year in a row. The Canton football team got off to a fast start and defeated Northern Cambria 42-13 in the Class A state quarterfinals in Altoona. Weston Bellows returned the opening kickoff 77 yards for a touchdown to give […]
CANTON, PA・3 DAYS AGO
WETM 18 News

ELMIRA, N.Y. (WETM) – A new book capturing the bond and relationship with two local legends is finally complete. Last year, the Twin Tiers lost a coaching icon when Elmira Notre Dame’s Mike D’Aloisio passed away after a lengthy battle with ALS. Before his death, D’Aloisio had been working on a new book with stories […]
ELMIRA, NY・1 DAY AGO
WETM 18 News

ELMIRA, N.Y. (WETM) – The Elmira Renegades will make their franchise debut next month. The Elmira Renegades begin training camp on December 9th and will begin to prepare for their inaugural season in the brand new Professional Box Lacrosse Association. Elmira will make their franchise debut on the road against the Binghamton Bombers on Friday, […]
ELMIRA, NY・2 DAYS AGO
WETM 18 News

ELMIRA, N.Y. (WETM) – The Brand Park Pool on Elmira’s southside hasn’t been used since 2005, falling into decay over the last 17 years. But the pool was once a bustling and popular summer attraction for the City. The Chemung County Historical Society said that the original pool was built in 1926 and was known […]
ELMIRA, NY・2 DAYS AGO
WETM 18 News

ITHACA, N.Y. (WETM) – Ithaca, New York—home to both Cornell University and Ithaca College—has been ranked as one of the top 20 best college towns in a new report from WalletHub. WalletHub looked at 415 college towns and cities of different sizes across the U.S. To determine the best and worst, the company examined wallet […]
ITHACA, NY・17 HOURS AGO
WETM 18 News

Near Westside holding 37th Homes for the Holidays

ELMIRA, N.Y. (WETM) – The Near Westside Neighborhood Association is hosting its annual Holiday Home Tour the first weekend of December, showcasing some of the best decorations in Elmira. The 37th Annual self-guided tour starts at noon on December 4 and will feature six homes in the Near Westside neighborhood. After looking at the incredible […]
ELMIRA, NY・1 DAY AGO
WETM 18 News

ELMIRA, N.Y. (WETM) – The holiday season is traditionally a time of year when donated blood supplies are light, the Red Cross says, so the organization is teaming up with Arnot Health to hold a blood drive in December. Arnot announced that it will hold a community blood drive at the Arnot Ogden Medical Center […]
ELMIRA, NY・21 HOURS AGO
WETM 18 News

NICHOLS, N.Y. (WETM) – For Giving Tuesday, the movement that promotes global “radical generosity”, Tioga Downs is giving over $1 million to dozens of non-profits across the Twin Tiers. Tioga Downs announced that it will be awarding $1.1 million to 54 non-profit organizations in Chemung, Tioga, Broome, and Bradford Counties. The announcement said “this year’s […]
CHEMUNG COUNTY, NY・22 HOURS AGO
WETM 18 News

ELMIRA, N.Y. (WETM) — An Elmira man was indicted following an incident in October 2022 where police say he stole catalytic converters. According to the documents, Jeremy R. Cornell was indicted on four counts from the October 9, 2022 incident. The charges include Criminal Mischief in the Second Degree, Criminal Possession of Stolen Property in […]
ELMIRA, NY・16 HOURS AGO
WETM 18 News

Which roads will be closed for Corning’s Sparkle celebration?

CORNING, N.Y. (WETM) – The holiday festivities continue in the Crystal City with the 47th annual Sparkle event this coming weekend, and drivers are being reminded which streets will be closed. The Gaffer District said that several blocks of Market Street and side streets will close to traffic in the afternoon on December 3, 2022. […]
CORNING, NY・1 DAY AGO
WETM 18 News

WATKINS GLEN, N.Y. (WETM) – With December just a matter of days away, which could mean snow, as well, the Village of Watkins Glen is reminding drivers of the odd-even parking rules that are in place for the winter. The Village issued a reminder that odd-even parking went into effect on November 1 and stays […]
WATKINS GLEN, NY・3 DAYS AGO
WETM 18 News

This past June, he was indicted on 25 state charges.
BUFFALO, NY・1 DAY AGO
WETM 18 News

Local health needs survey closes at the end of November

(WETM) – People living in the Southern Tier and Finger Lakes have a few more days to fill out a survey to determine the greatest health needs in local communities. Common Ground Health, based out of Rochester, announced that it was partnering with local health departments in July 2022 to launch the “My Health Story […]
MONROE COUNTY, NY・3 DAYS AGO
WETM 18 News

HAMMONDSPORT, N.Y. (WETM) – This winter will mark the Finger Lakes Boating Museum’s 25th Anniversary in Hammondsport. The museum announced that Saturday, December 10, 2022 marks its 25th year. To celebrate, the museum will be holding activities, holiday surprises, prizes, and a “Tasting Tour”. The Tour will have tastings from The Brewery of Broken Dreams, Pleasant […]
HAMMONDSPORT, NY・3 DAYS AGO
WETM 18 News

(WETM) – Today’s Pet of the Week is a cutie patootie smiling girl from the Schuyler County Humane Society. Rosie came to the SPCA as a stray and has since excelled as a student learning her lessons. Described as “50 pounds of love, cuddles, and energy”, this pit bull terrier mix wants to please, walks […]
SCHUYLER COUNTY, NY・1 DAY AGO