Man charged in shooting that resulted in two boys being shot 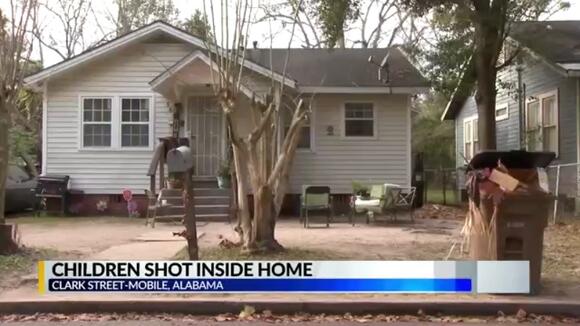 MOBILE COUNTY, Ala. ( WKRG ) —  Mobile police have arrested a man wanted in connection with a shooting that left two children injured Tuesday night.

One person dead after crash on Springhill Avenue

Tricksey is being charged after two children were shot at a home on Clark Street Tuesday, Dec. 28 in Mobile.

The shooting happened at around 11:47 p.m. Mobile Police confirmed that a 9-year-old and 6-year-old were shot while staying at their grandmother’s home. One was shot in the ankle and the other was hit in the shoulder. Their injuries were non-life threatening.

UPDATE (8:00 p.m.): Robinson will be in court on Friday, Dec. 9 for a bond hearing, according to the jail log. CITRONELLE, Ala. (WKRG) — Citronelle Police said they arrested 29-year-old Russell Lamar Robinson Thursday afternoon in connection to a shooting in Citronelle that left one man in “critical condition” Wednesday. Robinson is charged with […]
CITRONELLE, AL・5 HOURS AGO
WKRG News 5

FAIRHOPE, Ala. (WKRG) — The Fairhope Police Department said they arrested a man Thursday afternoon in connection to a shooting on Church Street last Saturday, according to a Facebook post from the FPD. 37-year-old Rickey Travoris Bell, of Fairhope, was arrested and transported to the Baldwin County Jail with the following charges: Fairhope Police responded […]
FAIRHOPE, AL・4 HOURS AGO
WKRG News 5

MOBILE, Ala. (WKRG) — Mobile Police said they arrested two people who fled from officers in separate incidents on the same road Wednesday night, according to MPD. At around 9:11 p.m. on Wednesday, Dec. 7 tried to stop a 17-year-old at East Linwood and Eagle Drive, but the driver did not stop. The suspect’s name […]
MOBILE, AL・9 HOURS AGO
WKRG News 5

MOBILE, Ala. (WKRG) — The Mobile Police Department said they are investigating a possible homicide after a man was found dead in the water along Battleship Parkway last Sunday, Dec. 4, according to a release from the MPD. 30-year-old Decisco Tillman, of Mobile, was floating in the water across the street from the USS Battleship […]
MOBILE, AL・4 HOURS AGO
WKRG News 5

MOBILE, Ala. (WKRG) — Mobile Police said a person who shot another with a nail gun acted in self-defense, according to a department news release. Police said no charges are pending in the case. Police said they responded to a shooting call on the 5000 block of Rangeline Crossing Road Wednesday night. They found a […]
MOBILE, AL・11 HOURS AGO
WKRG News 5

Mobile, Ala. (WKRG) — Mobile Police said they arrested a woman who allegedly stole cash from a register at a grocery store she used to work at, according to a release from the MPD. Alicia Rouse, 36, was arrested and charged with burglary. Police said Rouse walked into Millers Grocery at 8774 Tanner Williams Road […]
MOBILE, AL・9 HOURS AGO
WKRG News 5

Caught on camera: Mobile Sheriff looking for woman who scammed Walmart out of $1,800: MCSO

MOBILE, Ala. (WKRG) — The Mobile County Sheriff’s Office said they are looking for a woman who was caught on camera scamming a Walmart out of $1,800, according to a Facebook post from the MCSO. Deputies said the woman entered the 7855 Moffett Road Walmart and told a “new” cashier she was part of the […]
MOBILE, AL・8 HOURS AGO
WKRG News 5

Arrest made in Prichard killing: Police

ESCAMBIA COUNTY, Fla. (WKRG) — A Pensacola man was charged with attempted murder and felony battery for allegedly strangling a cab driver and a hotel worker on Dec. 5, according to Escambia County Sheriff’s deputies. Ricky Wiggins, 42, was charged with three counts of battery, battery on a law enforcement agent, and attempted murder. On […]
PENSACOLA, FL・2 DAYS AGO
WKRG News 5

ESCAMBIA COUNTY, Fla. (WKRG) — A Pensacola man is behind bars after allegedly kicking down the door to an Escambia County home and trying to rob them, according to Escambia County Sheriff’s deputies.   Matthew Sonny Thomas, 47, was charged with armed burglary of a dwelling, criminal mischief, grand theft of a firearm and possession […]
PENSACOLA, FL・2 DAYS AGO
WKRG News 5

MOBILE, Ala. (WKRG) — The Alabama Law Enforcement Agency said a Citronelle man died in a head-on crash on U.S. 45 Monday night, according to a release from ALEA. Mark S. Stricker, 63, died after his GMC Sierra pickup collided head-on with a Chevrolet Silverado pickup at around 6:28 p.m. on Monday, Dec. 5. Stricker […]
CITRONELLE, AL・1 DAY AGO
WKRG News 5

UPDATE (8:01 p.m.): The Pensacola Police Department said Jeff Michael Werowinski turned himself into county jail Tuesday night, according to Mike Wood with the PPD. PENSACOLA, Fla. (WKRG) — The Pensacola Police Department is asking for the public’s help in locating a man who they said is wanted for a felony hit-and-run crash, according to […]
PENSACOLA, FL・2 DAYS AGO
WKRG News 5

ESCAMBIA COUNTY, Fla. (WKRG) — A Cantonment woman is behind bars after allegedly taking advantage of her ex-husband’s parents and stealing thousands of dollars by opening fraudulent credit accounts, according to the Escambia County Sheriff’s Office. Samantha Ariel Perea, 36, was charged with grand theft, uttering a false instrument, criminal use of personal ID information […]
CANTONMENT, FL・1 DAY AGO
WKRG News 5

DAPHNE, Ala. (WKRG) – Driving above the posted speed limit in the Jubilee City is a problem Daphne Police say is getting worse. “It’s not safe for the children to play outside because drivers are not paying attention. We’ve got a lot of pedestrian friendly neighborhoods and a lot of people like to walk in […]
DAPHNE, AL・10 HOURS AGO
WKRG News 5

Man stabbed while walking down street in Mobile

MOBILE, Ala. (WKRG) — Officials with the Mobile Police Department said they are investigating a stabbing that happened in Mobile Monday afternoon. Officials said their officers were called to a local hospital after they received a report of a person coming in who had been stabbed. Officers talked to the victim who said he was […]
MOBILE, AL・2 DAYS AGO
WKRG News 5

FAIRHOPE, Ala. (WKRG) — A man from Fairhope is accused of making terrorist threats against an animal rescue group in Baldwin County and the Fairhope Police Department. 29-year-old Alexander Datko was arrested on Nov. 11. A warrant says he made statements threatening to kill the director of the Haven Animal Rescue in Fairhope, and allegedly […]
FAIRHOPE, AL・2 DAYS AGO
WKRG News 5

ESCAMBIA COUNTY, Fla. (WKRG) — A Bon Secour, Ala. man is behind bars after hitting several vehicles at Centennial Imports in Pensacola, a dealership that sells Volvos and Mercedes-Benz, according to Pensacola police officers. This happened Monday. William Paul Taylor, 34, was charged with leaving the scene of a crash involving damage to property, driving […]
PENSACOLA, FL・2 DAYS AGO
WKRG News 5

WARNING: The images in the videos in the player above and below in this article may be disturbing to some viewers. Viewer discretion is advised. MOBILE, Ala. (WKRG) — Mobile Police said they arrested a man Monday afternoon in connection to a Saturday shooting at Phat Tuesday Sports Bar, according to a release from the MPD. The […]
MOBILE, AL・3 DAYS AGO
WKRG News 5

A new program launched Wednesday will share data about when and where gunshots are happening in the City of Mobile.
MOBILE, AL・1 DAY AGO