WJTV.com provides the latest news, sports, and weather for Jackson, Mississippi, and the surrounding metro area. 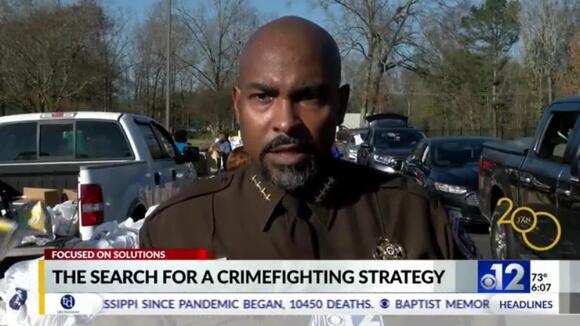 HINDS COUNTY, Miss. ( WJTV ) – Recently elected Hinds County Sheriff Tyree Jones is making plans to tackle violent crime in the area after the deadliest year on record in 2021 for the City of Jackson

More than 150 people lost their lives to violent crime in Jackson in 2021. In his first full year as sheriff, Jones has a plan in place to make 2022 a less violent year for the city.

“To form relationships and working partnerships with other federal and state law enforcement agencies, to be able to address the violent crime issues that we are currently plagued with in the City of Jackson right now. This is an effort that we’ve already begun. We’ve already begun having meetings and talking to other stakeholders that will be involved with addressing the violent crime issues,” said Jones.

Neighbors witnessed the efforts of the plan already when five men were arrested for violent crimes .

Jones said he also wants to strengthen the relationship between law enforcement and the Jackson community in order to continue removing violent offenders from the streets.

For the latest news, weather, sports, and streaming video, head to WJTV.

CRYSTAL SPRINGS, Miss. (WJTV) – Arrests warrants have been issued for two Jackson men after a teenager was shot and killed during an armed robbery in Crystal Springs. Police said the warrants have been issued for 27-year-old Datarius Mylik Jamall Boyd and 23-year-old Nhekhil Quajaylon Lamar Scott in connection to the murder of Bashar Ali […]
CRYSTAL SPRINGS, MS・6 HOURS AGO
WJTV 12

WESSON, Miss. (WJTV) – A four-day-old child, who was choking, was saved by a Wesson police officer on October 24. Officials with the Wesson Police Department said the family called, stating a four-day-old child was choking and briefly stopped breathing. In fear that there wasn’t enough time for an ambulance, an officer rushed the newborn […]
WESSON, MS・6 HOURS AGO
WJTV 12

Man shot, another arrested after shooting in Bolton

BOLTON, Miss. (WJTV) – One man is in critical condition, and another is behind bars after a shooting in Bolton on Friday, December 2. Officials with the Hinds County Sheriff’s Office (HCSO) said the shooting happened in the afternoon in the 6100 block of Northside Drive. They said Lecorius Hodge, 40, was shot in the […]
BOLTON, MS・6 HOURS AGO
WJTV 12

LEAKE COUNTY, Miss. (WJTV) – One person is dead and two people were injured after what law enforcement is considering a domestic dispute in Leake County. According to Sheriff Randy Atkinson, the shooting happened before 5:30 p.m. in the city limits of Carthage. The sheriff said the unidentified shooter shot his wife and a man. […]
CARTHAGE, MS・12 HOURS AGO
WJTV 12

HINDS COUNTY, Miss. (WJTV) – A man who was found guilty of the first-degree murder of Jackson rapper Lil Lonnie appealed his conviction and sentence, which was recently affirmed by the Mississippi Court of Appeals. Monya Davis was found guilty of killing Lonnie Taylor on April 29, 2018. Davis fatally shot Taylor after he and […]
JACKSON, MS・11 HOURS AGO
WJTV 12

JACKSON, Miss. (WJTV) – A homicide investigation is underway after a male victim’s body was found on Jackson State’s campus. Hinds County Coroner Sharon Grisham-Stewart said the victim, who has not been identified, had been shot. His body was found inside a vehicle. Jackson State University (JSU) leaders confirmed the victim was a student. They […]
JACKSON, MS・12 HOURS AGO
WJTV 12

Closures planned on I-20 in Scott County

SCOTT COUNTY, Miss. (WJTV) – Leaders with the Mississippi Department of Transportation (MDOT) announced there will be intermittent road closures on Interstate 20 in Scott County. The closures will be on I-20, in both directions, between State Route 35 (Exit 88) and State Route 481 (Exit 80). According to MDOT, the closures will be between […]
SCOTT COUNTY, MS・1 DAY AGO
WJTV 12

VICKSBURG, Miss. (WJTV) – A woman was arrested in connection to the fatal stabbing that happened at Motel 6 in Vicksburg Tuesday morning. Vicksburg police said they were dispatched to Motel 6 on Interstate 20 Frontage Road before 8:30 a.m. on November 29. When officers arrived, they found 37-year-old Dale Turpin, of Vicksburg, deceased in […]
VICKSBURG, MS・2 DAYS AGO
WJTV 12

JACKSON, Miss. (WJTV) – A man wanted for allegedly killing a Louisiana produce company driver in Jackson earlier this year has been arrested. Deputy Chief Deric Hearn said Jacob Collins was taken into custody and arrested on an outstanding murder warrant on Saturday, November 26. Collins was wanted for the murder of Tarik Domino that […]
JACKSON, MS・2 DAYS AGO
WJTV 12

Man accused of stabbing father to death in Jackson

JACKSON, Miss. (WJTV) – A man has been accused of stabbing his father to death in Jackson. Deputy Chief Deric Hearn said officers responded to a home on Riser Street on Wednesday, November 30 in reference to the fatal stabbing. When they arrived, they found 60-year-old Kenneth BoClair deceased. Hearn said police believe the victim […]
JACKSON, MS・2 DAYS AGO
WJTV 12

BYRAM, Miss. (WJTV) – Byram police arrested a man and three teenagers in connection to a shoplifting incident at Walmart. Byram Police Chief David Errington said they received a call about the teens shoplifting electronics from the business. The teens allegedly told officers that James Jackson had sent them into to the store to steal […]
BYRAM, MS・2 DAYS AGO
WJTV 12

JACKSON, Miss. (WJTV) – The City of Jackson has hired an interim third-party manager to get the water system back on track. Bringing in more than 40 years of experience in public works and water systems with him, Ted Henifin has been tasked with maintaining, improving and correcting Jackson’s water system. According to Henifin, there […]
JACKSON, MS・1 DAY AGO
WJTV 12

Capitol police to step up security for SWAC Championship

JACKSON, Miss. (WJTV) – Capitol Police are ramping up patrols ahead of Saturday’s SWAC Championship. Police said ensuring the safety of fans at this weekend’s game between Jackson State and Southern University at The Vet is their top priority. Capitol police will increase the number of officers patrolling both the game and the areas surrounding […]
JACKSON, MS・1 DAY AGO
WJTV 12

RICHLAND, Miss. (WJTV) – An 18 wheeler and FedEx truck were involved in a crash early Wednesday morning. The crash happened along Highway 49 and Old Highway 49 in Richland. There are no reports of any injuries. The cause of the crash is under investigation.
RICHLAND, MS・2 DAYS AGO
WJTV 12

What to know ahead of SWAC Championship in Jackson

JACKSON, Miss. (WJTV) – Visit Jackson will partner with the Hank Aaron Sports Academy to provide gameday parking and shuttle service for the SWAC Championship game on Saturday, December 3. The game between Jackson State and Southern will be at the Mississippi Veterans Memorial Stadium (The Vet). Kickoff is scheduled for 3:00 p.m., and gates […]
JACKSON, MS・2 DAYS AGO
WJTV 12

Jackson State football head coach Deion Sanders said Monday that yes, he has received a job offer from Colorado. He also said there are have been offers made to him as well. On Tuesday, WJTV asked Coach Prime if he wants to stay at JSU or if he wants to leave. Coach Prime said he […]
JACKSON, MS・1 DAY AGO
WJTV 12

Mendenhall Football Returns to State Championship for First Time Since 1988

Mendenhall football is back in the state championship for the first time since 1988. The Tigers won the title those 34 years ago and now look to do so again on Saturday.
MENDENHALL, MS・23 HOURS AGO

WJTV.com provides the latest news, sports, and weather for Jackson, Mississippi, and the surrounding metro area.