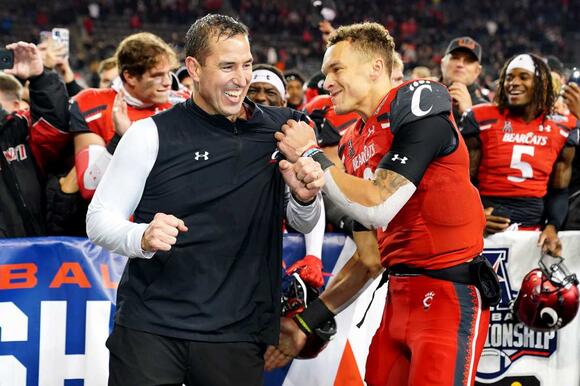 It finally happened. A non-Power 5 team makes the College Football Playoff - and most everyone around the country would tell you they deserve to be here. The Bearcats reward? The big, bad Alabama Crimson Tide - a program that has stood alone atop college football's mountain for the last decade.

Luke Fickell and the Bearcats have an awful lot of people rooting for them to pull off the impossible this weekend. Could they actually do it?

Here’s how our staff at BuckeyesNow expects the game to go down:

I love Cincinnati and I'll be rooting for them to pull off one of the all-time great upsets in the history of the sport. While it's possible that they could do it, I have a hard time seeing it. I just don't think they have the horses to pull this off and the Cotton Bowl is going to feel like a road game for them.

Bryce Young and company have roasted basically everyone they've played this year. Cincinnati's strength defensively is its pass defense, but they haven't played a team quite as talented as Alabama.

The fact that they arguably should have beaten Georgia in last year's Peach Bowl should give them the confidence that they can play with the Tide. But I have a hard time seeing them actually pull this thing off.

I would feel much better about the Bearcats’ chance of winning a College Football Playoff semifinal game if they were playing anyone but the Crimson Tide, who put forth their best game of the year last time out.

Alabama is simply too talented offensively and has too much speed on defense, which will force Cincinnati quarterback Desmond Ridder into a handful of uncharacteristic turnovers. This game will be over by halftime.

Despite Brian Kelly's best efforts, the best worst quote we've had since the end of the regular season came from Alabama's Will Anderson who said that the Tide were the "underdog" in their game against Cincinnati because he believes Bama has been disrespected all season long.

You know, we're talking about the program that has received every benefit of the doubt since the CFP began. The program gets every advantage possible in this format we have. UNDERDOG #1 SEED. Just for that, I'm picking the Bearcats. I'm the biggest UC fan in history now because we all have to hope that poor Will gets proven right. Annoying.

Hartline was reportedly set to interview for the Bearcats' head coaching job in the near future.
COLUMBUS, OH・1 DAY AGO
BuckeyesNow

According to a report from FootballScoop's John Brice, Ohio State passing game coordinator and wide receivers coach Brian Hartline will formally interview for the vacant Cincinnati head coaching job “in the near future, perhaps as soon as soon as Thursday.”. The 36-year-old Hartline, who played for the Buckeyes from...
CINCINNATI, OH・2 DAYS AGO