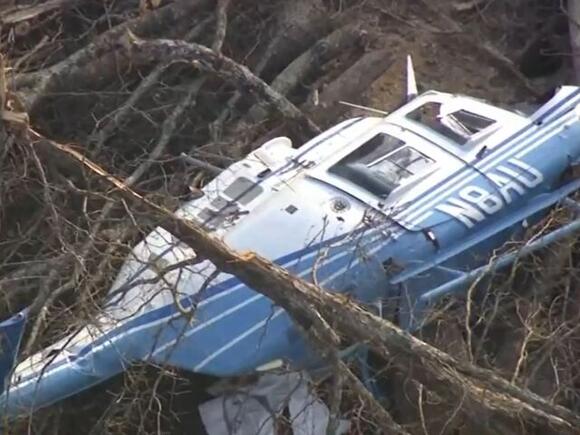 One person is dead and three more are injured after a helicopter crashed northwest of Houston on Thursday, according to state and federal authorities.

A Bell 206B helicopter with four people on board crashed in a field in Livingston, Texas, about 70 miles northwest of Houston, the Federal Aviation Administration said in a statement.

It’s unclear what led to the crash.

The National Transportation Safety Board will lead the investigation and provide updates, according to the FAA statement. The NTSB did not immediately respond to questions.

The Texas Department of Public Safety said the crash happened about 11:45 a.m.

Daniel King, 54, of Livingston, was pronounced dead at the scene, according to DPS.

Their conditions were not immediately available.

A man has been arrested and charged with murder in the fatal shooting of Migos rapper Takeoff, said Houston police on Friday.
HOUSTON, TX・1 DAY AGO
25 News KXXV and KRHD

Houston is expected to be under a boil water notice until Tuesday after a power outage at a water treatment plant. Houston ISD schools will be closed on Monday.
HOUSTON, TX・5 DAYS AGO
25 News KXXV and KRHD

All of Houston under boil water notice after system outage: Report

As first published by ABC 13, the City of Houston's Main Water System has been placed under a boil water notice after losing power.
HOUSTON, TX・6 DAYS AGO
25 News KXXV and KRHD

A 27-year-old man from Houston has been arrested after a shooting left a 16-year-old girl wounded over the weekend.
CAMERON, TX・12 DAYS AGO
25 News KXXV and KRHD

Murder suspect arrested in connection with Killeen's 19th homicide of 2022

A 31-year-old man has been arrested for a murder that occurred last week in the 5000 block of Primavera Lane.
KILLEEN, TX・15 DAYS AGO
25 News KXXV and KRHD

Gov. Abbott calling for an investigation into Harris County Elections

Governor Greg Abbott is calling for an investigation into the Harris County Elections. All Harris County polling locations were open until 8 p.m. due to issues.
HARRIS COUNTY, TX・19 DAYS AGO