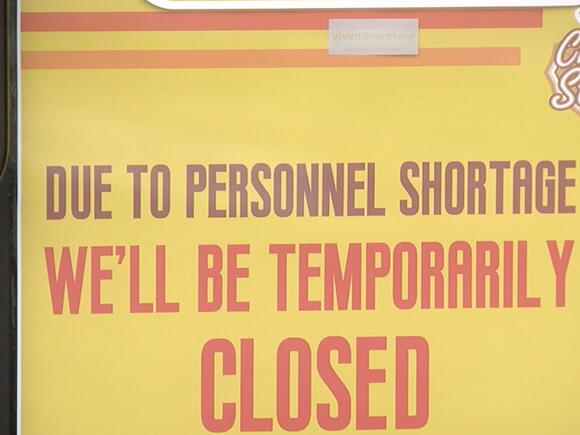 New Year’s Eve is usually a big time of the year for Las Vegas restaurants but some are temporarily closing their doors this weekend because of staffing shortages and a surge in COVID-19 cases.

Whether it’s indulging your sweet tooth or grabbing some coffee, that’s what the Crepe Station is known for. Owner William Tejeda says the new year's holiday is normally a busy time for his business.

“It’s winter you know. We have crepes and we have coffee so people like it in this time.”

But his location on Lake Mead is temporarily closed because he doesn’t have enough workers. Tejeda says the latest surge of COVID-19 cases has made an existing issue worse.

“We’ve been having trouble with people because they’re getting sick or they don’t want to work, so basically the whole year we’ve been dealing with this,” he said.

His business isn’t the only one feeling the effects. Lawry’s Las Vegas is also shutting down until the first week of January due to staffing issues. Good Pie in downtown Vegas is closing down until New Year’s Day due to positive cases among workers. Tejeda says closures like these ensure current employees aren’t overworked with service and quality not compromised for customers.

“You want to give the best to the customers and if we’re short, we can’t do that,” he said.

Financial advisor Jason Baucom says this time of the year will draw hundreds of thousands of visitors to Las Vegas.

“It’s the biggest holiday of the year where you find the most amount of people traveling to Las Vegas as a destination,” he said.

“It unfortunate that business will be temporarily closed for New Year’s Eve because that one day in December makes their whole month and gets it starting right for the following year. It is a definite blow to their financial well-being,” he said.

Tejeda says he’s lucky to have two other locations staying open to accommodate crowds, but knows other restaurants aren’t so lucky. He has a message for any visitors.

“Support all the small businesses here because we don’t want to close it down. We want to close temporarily but not forever,” he said.

Tejeda says he hopes to reopen this location in about 2-3 weeks once he is able to hire enough people.

This is unbelievable that no one wants to work. Govt has to stop paying people to stay home

Thousands of Southern Californians are flocking to Las Vegas

A record number of Southern Californians are now calling Las Vegas home. The median cost of home is roughly $950,000 in LA, compared to $440,000 in Las Vegas.
1 DAY AGO
KTNV 13 Action News

A Las Vegas local and a visitor from Oregon won thousands in jackpots at The Cromwell and Gold Coast.
2 HOURS AGO
KTNV 13 Action News

One local foundation is helping put an end to crime by getting more officers involved in the community.
4 HOURS AGO
KTNV 13 Action News

Planet 13: Where you can watch, purchase and soon consume cannabis

Planet 13, the world’s largest dispensary and SuperStore has received approval for its much-anticipated consumption lounge from the Nevada Cannabis Compliance Board.
5 HOURS AGO
KTNV 13 Action News

Every dollar spent at the Magical Forest goes towards programs and services for over 3,000 people with disabilities at Opportunity Village
3 DAYS AGO
KTNV 13 Action News

In the wake of an unprecedented raid on several stores in the Boulevard Mall, 13 Investigates explores more systemic issues tenants claim are compromising shopper safety and public health.
4 DAYS AGO
KTNV 13 Action News

Tony Hsieh invested more than $350 million in revitalizing downtown Las Vegas before his unexpected death. Now, his estate will sell some of those holdings, DTP Companies announced Friday.
3 DAYS AGO
KTNV 13 Action News

Several major events are taking place in Las Vegas throughout the weekend, from NFR and Pac-12 to First Friday, Raiders Game Day, and more.
3 DAYS AGO
KTNV 13 Action News

With the real estate market cooling off, some Las Vegas sellers are getting creative to get more offers.
3 DAYS AGO
KTNV 13 Action News

According to the Las Vegas Convention and Visitors Authority, the average daily room rate jumped to $209.89, which broke a record.
5 DAYS AGO
KTNV 13 Action News

"The Glittering Lights Display" at the Las Vegas Motor Speedway is ranked as one of the top 23 displays in the country according to U.S. News & World Report.
6 DAYS AGO
KTNV 13 Action News

Cowboy Christmas Comes to the Las Vegas Valley. Hear from vendors and visitors on the kick off to this event.
4 DAYS AGO
KTNV 13 Action News

Study finds rude behavior on the rise across the globe

A new study says rudeness is on the rise. 13 Action News anchor Tricia Kean spoke with locals who say it's true, but each of us can make the difference.
1 DAY AGO
KTNV 13 Action News

In Southern Nevada, an average of 420 persons were diagnosed with HIV each year during the previous five years.
5 DAYS AGO
KTNV 13 Action News

Cowboy Christmas rides into town while the National Finals Rodeo. The holiday market features more than 350 exhibitors from across the country and it offers interactive experiences for families.
4 DAYS AGO
KTNV 13 Action News

The Las Vegas Desert Dogs held an open youth lacrosse clinic for members of the indigenous community today at the team’s training facility at Las Vegas Sportspark.
2 DAYS AGO