WATCH: What it’s like on a COVID testing line in the heart of NYC 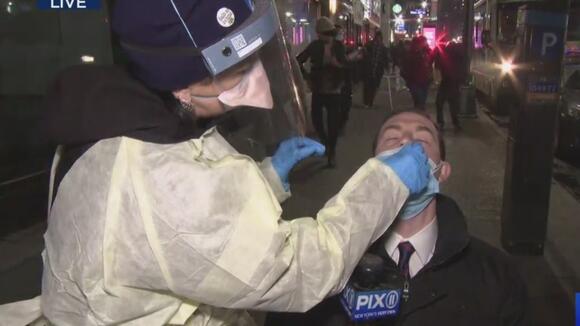 HELL’S KITCHEN, Manhattan — The city and state are still struggling to keep up with testing demand as this omicron surge continues in New York.

More than 74,000 New Yorkers tested positive Wednesday.  Hospitalized COVID patients stand at 7,373– with the hospital numbers expected to approach March 2020 levels if the pace continues for another two weeks.

Health officials suggest you get a test if you plan to gather with anyone else for New Year’s Eve or New Year’s Day.

PIX 11’s Henry Rosoff waited on line at a city-run testing location in Hells Kitchen.  It took him about an hour to get a rapid test.  Doctors at the site said a PCR would take about two days — despite the Mayor’s Office insisting the city gets results in about 24 hours.

“We should plan and expect a challenging few weeks, certainly through January, with the winter surge due to omicron,” conceded Health Commissioner Dave Chokshi.

Still, most elected leaders remain hesitant about telling people to stop gathering in large groups, nor is there much encouragement to work from.  Instead, vaccination and testing remains the focus.

In Nassau County, a long line of cars waited to pick up badly needed at home test kits.

County Executive Laura Curran conceded there is really no way to tell how the results will be tracked.

“I have to imagine human nature being what it is, most people will not report if they test positive at home,” she said. “But we’re just asking people to do what they have been doing this entire pandemic, just use your common sense.”

The focus certainly seems to have shifted in many corners of the tri-state region to doing what is needed to protect not just livesm but livelihoods.

“To keep society running as normal as possible,” Curran said at the kit handout event.  “Schools are going to open in a week or so. We want to keep them open, and we want to keep our businesses running with as few disruptions as possible.”

In New York City, you can spot a long testing line every few block as the city and state scramble to open new locations, including in government office buildings and down in the subways .

The city has been been criticized for closing sites just ahead of this wave.

NEW YORK (PIX11) —In four of the five New York City boroughs, people are urged to wear masks indoors and on public transportation due to a spike in COVID cases, according to the CDC. The Bronx, Brooklyn, Queens, and Staten Island are in orange, meaning high-risk levels, while Manhattan is in yellow, the medium-risk level, […]
NEW YORK CITY, NY・1 DAY AGO
PIX11

SantaCon is coming to town (the town is NYC)

NEW YORK (PIX11) — It’s the most wonderful time of year for some and a hated time for others: SantaCon returns to New York City on Saturday. The annual bar crawl, which is also a charity fundraiser, starts at 10 a.m. Santa outfit-clad revelers will meet at Broadway and 40th Street and head out to […]
NEW YORK CITY, NY・12 HOURS AGO
PIX11

NEW YORK (PIX11) —- Ho ho hold on to your drink. The MTA is banning alcohol on LIRR and Metro-North trains and statins from early Saturday through noon on Sunday, the agency announced Wednesday. The ban kicks in for a 32-hour period around SantaCon. “Maintaining safe and orderly travel is always a priority,” MTA Police Chief […]
NEW YORK CITY, NY・7 HOURS AGO
PIX11

MANHATTAN (PIX11) — Thank you for being a friend with patience; Golden Girls Kitchen, a pop-up restaurant, opened in Manhattan Wednesday after a delay. It had been set to open in mid-November. The restaurant was also originally set to open at Skorpios NYC on East 54th Street, but is now at 19 Fulton Street in […]
NEW YORK CITY, NY・13 HOURS AGO
PIX11

Julius’ becomes landmark for role in LGBTQ rights in NYC

WEST VILLAGE, Manhattan (PIX11) — After a decade-long fight, New York City’s oldest gay bar has become a landmark.  Julius’ also played a key role in the fight for LGBTQ+ rights in the city.  “It’s a place where everybody can come in all generations, and they come in, and they exchange ideas, learn some history […]
NEW YORK CITY, NY・1 DAY AGO
PIX11

UPPER WEST SIDE, Manhattan (PIX11) — It was homeward bound on Tuesday for Bear the dog, who swam across the Hudson River from Manhattan to New Jersey. Bear, a 6-month-old service dog for Ellen Wolpin’s son, went missing Saturday afternoon. He slipped out of his collar and ran about 20 blocks before getting into the […]
NEW YORK CITY, NY・1 DAY AGO
PIX11

BROOKLYN, N.Y. (PIX11) — A Ring camera showed a 12-year-old girl running from her great-grandmother’s house in Brooklyn last Saturday at 11:40 p.m. The girl had apparently made a plan to rendezvous with a Bronx teen she was chatting with on Instagram. Kylasyia Thompson, lead program assistant with the nonprofit “Girl Vow,” said adolescents, especially […]
BROOKLYN, NY・8 HOURS AGO
PIX11

Cash toll collection coming to an end at Lincoln Tunnel

NEW YORK (PIX11) — Cashless tolling at the Lincoln Tunnel is just days away. The change at the busy crossing between New Jersey and New York City will kick in on Dec. 11. Drivers with E-ZPass will continue as usual. Those without E-ZPass will have their license plates photographed by cameras. They’ll receive bills in the […]
NEW YORK CITY, NY・8 HOURS AGO
PIX11

NEW YORK (PIX11) — Getting a dinner reservation at your favorite restaurant can be a challenge this time of year. It’s even more difficult to get your favorite table. Now, there’s an app for that. Tablz allows diners to take a 3D tour of participating restaurants and book a specific table, for a price. The […]
NEW YORK CITY, NY・5 HOURS AGO
PIX11

NEW YORK (PIX11) —- There are some New York City spots, like the Star of Hope at Madison Square Park, with some Christmas history New Yorkers may be unfamiliar with. John Friia, the digital creator behind Here in New York, joined New York Living Monday to share some of those hidden spots and the history […]
NEW YORK CITY, NY・2 DAYS AGO
PIX11

NYC doctor speaks on ‘tripledemic’: COVID, RSV, and the flu

NEW YORK (PIX11) – The New York City area is juggling waves of COVID-19, the flu, and RSV — or respiratory syncytial virus — in a phenomenon some are calling a “tripledemic” or “tridemic.” NYU Langone’s Brooklyn branch and the borough’s Woodhull Medical Center report there are no intensive care beds available.  Dr. Arun Chopra […]
NEW YORK CITY, NY・1 DAY AGO
PIX11

Where do NYC pigeons go in the winter?

NEW YORK (PIX11) — New Yorkers looking up at birds flying south for the winter are out of luck if they’re hoping to see pigeons.  The Big Apple’s ubiquitous bird is no fair-weather friend to New York City. Pigeons are tough and stick in the five boroughs, even as the cold settles in, Sunny Corrao, […]
NEW YORK CITY, NY・1 DAY AGO
PIX11

Brooklyn girl, 12, found in the Bronx after disappearing from home, family says

THE BRONX, N.Y. (PIX11) — The family of a missing 12-year-old Brooklyn girl on the autism spectrum told PIX11 News she was located in the Bronx late Tuesday night, after a social media campaign to find her apparently caused concern for the people she was staying with. “Every time they went on social media, they […]
BROOKLYN, NY・19 HOURS AGO
PIX11

NEW YORK (PIX11) — After two years of a COVID-19 lockdown, people have shed their masks and are out and about again enjoying the spirit of the holiday. But that’s raising concern in the medical community as they’re seeing an unsettling surge in COVID-19 and other respiratory illnesses. That has prompted the Centers for Disease Control and Prevention […]
NEW YORK CITY, NY・9 HOURS AGO
PIX11

NEW YORK (PIX11) — The MTA has been considering a redesign of the iconic subway turnstiles as fare evasion continues to seriously hurt the transit agency’s bottom line, MTA Chair and CEO Janno Lieber said. Fare evasion is costing the MTA about $500 million a year. The MTA’s already rolled out guards as part of a […]
NEW YORK CITY, NY・1 DAY AGO
PIX11

NEW YORK (PIX11) – An immersive art exhibition celebrating the work of French painter Claude Monet is extending its stay in New York City. “Monet’s Garden” opened at the Seamen’s Bank Building at 30 Wall Street in Manhattan in November. The exhibit was originally planned to run through January, but it will now remain in […]
NEW YORK CITY, NY・2 DAYS AGO
PIX11

NEW YORK (PIX11) — The holidays are coming up, and with them winter recess in New York City public schools. The last day of classes before the 2022-23 winter break is Friday, Dec. 23, according to the Department of Education’s online calendar.  Schools will then be closed through Monday, Jan. 2, the calendar shows. That […]
NEW YORK CITY, NY・15 HOURS AGO
PIX11

NEW YORK (PIX11) — New York’s hospitals are facing an alarming surge in pediatric cases of RSV, or respiratory syncytial virus, in addition to COVID-19 and flu diagnoses. The phenomenon, referred to by some as a “tripledemic,” is so concerning that Sen. Chuck Schumer on Sunday urged the federal government to be at the ready […]
MANHATTAN, NY・2 DAYS AGO
PIX11

NEW YORK (PIX11) — Two moms with the Radio City Rockettes have passed their love for dancing down to their children. PIX11’s Hazel Sanchez visited the Rockettes on the PIX11 Morning News Wednesday. Watch her full report in the video player.
NEW YORK CITY, NY・16 HOURS AGO
PIX11

WARWICK, N.Y. (PIX11) — A beloved New York bar is saying goodbye to the end of an era before embarking on a fresh start. Yesterdays, which opened in 1984 at 29 Main St. in Warwick, N.Y., is serving up its last drinks before moving to a new location on Elm Street, according to the owner. […]
WARWICK, NY・2 DAYS AGO