2 injured after crash near Hudsonville 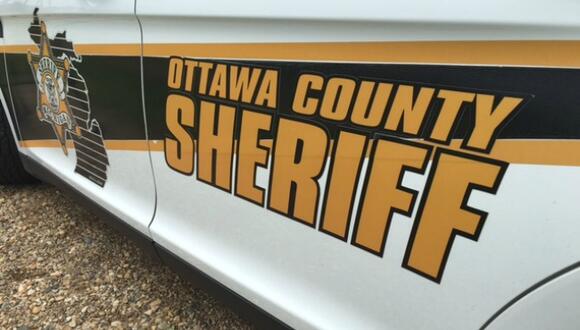 ALLENDALE TOWNSHIP, Mich. (WOOD) — A woman was brought to the hospital after a crash near Hudsonville Thursday.

It happened around 5:30 p.m. at the intersection of Fillmore Street and 68th Avenue in Allendale Township.

A 28-year-old man from Bailey was driving eastbound on Fillmore Street and stopped for the stop sign, the Ottawa County Sheriff’s Office said in a release. It said he then began to turn north onto 68th Avenue when a 34-year-old woman from Jenison driving westbound failed to stop at the stop sign and hit his car on the passenger side.

The woman was brought to a local hospital with injuries that are not considered life-threatening, officials say.

The crash remains under investigation.

A Battle Creek man is in custody after he led deputies on a chase and crashed onto train tracks in Springfield Sunday evening.
SPRINGFIELD, MI・15 HOURS AGO
WOOD TV8

A 12-year-old girl and 19-year-old woman were killed in an early Monday morning house fire in Kentwood.
KENTWOOD, MI・21 HOURS AGO
WOOD TV8

The Holland Department of Public Safety said a police dog has died from a sudden illness.
HOLLAND, MI・15 HOURS AGO
WOOD TV8

Driver dead in crash with tree in Allegan Co.

One person was killed when a vehicle crashed into a tree in Allegan County Saturday.
ALLEGAN COUNTY, MI・2 DAYS AGO
WOOD TV8

Police have identified the man shot and killed at a Kentwood apartment complex on Friday as Dionte Lamarcus Sims.
KENTWOOD, MI・10 HOURS AGO
WOOD TV8

MSP: Two vehicles on US-131 shot at with BB gun

Police say two vehicles were shot at with a BB gun on Saturday on US-131 in the Wyoming area.
WYOMING, MI・1 DAY AGO
WOOD TV8

The driver of a semi-truck died in a crash in Saugatuck Township on Saturday morning, police said.
SAUGATUCK, MI・2 DAYS AGO
WOOD TV8

An Edmore man was airlifted to the hospital on Friday following an ORV crash in Home Township.
EDMORE, MI・3 DAYS AGO
WOOD TV8

Cause of death released for homeless man found in river

The cause of death for the man whose body was found in the Grand River earlier this month has been released.
GRAND RAPIDS, MI・12 HOURS AGO
WOOD TV8

Two teenagers are in custody after allegedly stealing a vehicle and leading police on a chase early Friday morning.
KALAMAZOO, MI・3 DAYS AGO
WOOD TV8

A man was killed in a Friday night shooting at a Kentwood apartment complex.
KENTWOOD, MI・3 DAYS AGO
WOOD TV8

A man has been sentenced for soliciting sex from teens online.
MARTIN, MI・11 HOURS AGO
WOOD TV8

No injuries when car crashes into Dollar Tree in Walker

No one was injured when a car hit a storefront in Walker Friday afternoon.
WALKER, MI・3 DAYS AGO
WOOD TV8

‘He executed her’: GRPD looking for man accused of killing ex-girlfriend

The goal of the MuskegonCity Public Art Initiative, which launched in 2018, was to create 10 new unique works of public art around the city.
MUSKEGON HEIGHTS, MI・11 HOURS AGO
WOOD TV8

Rosa Parks Circle is "still waiting for the weather to cooperate for ice making" and won't be opening until at least Wednesday.
GRAND RAPIDS, MI・16 HOURS AGO
WOOD TV8

At halftime of Saturday’s Division 1 state finals, the Caledonia football team was standing up to the challenge of competing against the top-ranked team in the state.
CALEDONIA, MI・2 DAYS AGO