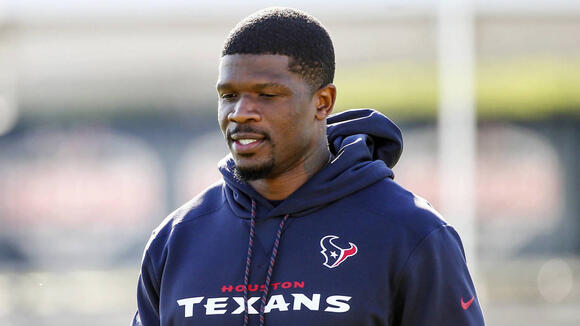 In January, the Hall of Fame Selection Committee will convene to elect up to five of the finalists, who have to receive a minimum positive vote of 80 percent for election. The full list of finalists is as follows:

In addition to the 15 modern-era finalists, three more candidates — Dick Vermeil, Art McNally and Cliff Branch — are eligible for induction in the coach, contributor and senior categories, respectively. They will also be subject to a vote from the induction committee in January.

In November, the Hall of Fame narrowed its list of modern-era candidates to 26 semifinalists. The 11 who didn't make the cut to become finalists includes receivers Steve Smith, Steve Tasker and Hines Ward.

It has been nearly a decade since the NFL punished Emmanuel Sanders for faking an injury in order to deliberately stop play during a game. But the league issued a stern warning to all 32 teams over the weekend regarding players who do just that -- and there will be consequences.
CINCINNATI, OH・3 DAYS AGO
Yardbarker

Former No. 1 overall pick getting another shot in NFL with Dolphins

Some nine years after he went with the No. 1 overall pick in the NFL Draft, a veteran lineman is getting another call. ESPN’s Adam Schefter reported on Monday that the Miami Dolphins are signing offensive tackle Eric Fisher. The 31-year-old will replace Dolphins starting tackle Austin Jackson, who...
2 DAYS AGO
HBCU Legends

Fifteen head coaching candidates for the position once held by Coach Prime at Jackson State.
JACKSON, MS・23 MINUTES AGO
Yardbarker

Unsurprisingly, Watkins is excited about the opportunity to play under "Coach Prime." On Sunday, Watkins told 247 Sports that Sanders was a "big influence" on him, and he'll have him playing at his "best ability." "He is that guy," Watkins said of Sanders. "Man, he did it on the field,...
FORT MYERS, FL・3 DAYS AGO
Yardbarker

Steelers’ Legend James Harrison Tells Ben Roethlisberger That Coaches Ignored His Advice About Rookie T.J. Watt To The Detriment Of The 2017 Team

James Harrison the legendary Steelers linebacker joined Episode 15 of the Footbahlin with Ben Roethlisberger podcast and the former All-Pro didn’t disappoint or hold back with the stories of his playing career. Co-host Spencer T’eo and Ben Roethlisberger are now three for three when they hold a watch party with Steelers legends during a Pittsburgh Steelers game. Previously Charlie Batch and Maurkice Pouncey were present for Steeler victories and Harrison completed the trio during the 19-16 victory over the Atlanta Falcons.
1 DAY AGO
Yardbarker

After Sunday's defeat to the Jacksonville Jaguars, a Twitter user suggested that the Ravens "Let Lamar walk and spend that money on a well-rounded team," while tagging the former MVP. This came after Jackson went just 16-for-32 with 254 passing yards and one touchdown but added a team-high 89 rushing yards.
5 DAYS AGO
Yardbarker

The New York Yankees have been connected to Pittsburgh Pirates outfielder Bryan Reynolds multiple times over the past few seasons, but things are getting a bit more real after Reynolds requested a trade over the weekend. The Yankees’ interest in Reynolds is quite straightforward and justifiable, he’s one of the...
2 DAYS AGO
Yardbarker

The Winter Meetings began on Monday, and the Hot Stove is burning as rumors and deals flow. Two of the best pitchers in baseball — Jacob deGrom and Justin Verlander — signed lucrative deals with new clubs, and there are more on the horizon. The Braves are preoccupied with the shortstop position as contract negotiations with Dansby Swanson’s representation continue. Atlanta reportedly offered Swanson around $100 million in the middle of the season, which the Georiga native declined.
1 DAY AGO
Yardbarker

When San Francisco 49ers quarterback Jimmy Garoppolo went down to a foot injury early in their game against the Miami Dolphins on Sunday, it did not look good. Following San Francisco’s surprising win with rookie seventh-round pick Brock Purdy leading the charge, head coach Kyle Shanahan noted that Garoppolo will have to undergo surgery and miss the remainder of the season.
SAN FRANCISCO, CA・1 DAY AGO
Yardbarker

Head coach Sean McVay seems hyped to have quarterback Baker Mayfield with the Los Angeles Rams, if only for a month. "What I can say in all sincerity is that there's an excitement about being able to work with him for what we know is five more weeks," McVay said about Mayfield on Wednesday, per ESPN's Sarah Barshop. "And whether he plays in five games or four games is to be determined. But I'm excited about that."
LOS ANGELES, CA・18 HOURS AGO
Yardbarker

ESPN's Adam Schefter took hits from peers following his report about Cleveland Browns quarterback Deshaun Watson. Over the weekend, Schefter pointed out that sources told him Watson has made "'signs of progress' during his mandatory treatment program" that is part of the settlement between the NFL and NFL Players Association. It also involved the 27-year-old serving an 11-game suspension related to allegations of sexual misconduct during massage sessions. As shared by the Barrett Sports Media website, media members and fans took to Twitter to blast Schefter regarding the report considering that Watson has repeatedly denied any wrongdoing:
CLEVELAND, OH・3 DAYS AGO
Yardbarker

At 5-8, but still within striking distance of the Tampa Bay Buccaneers (6-6) in the lowly NFC South, now is the perfect time for the Falcons to make the switch. Since starting the season 4-4, Atlanta has dropped four of their last five games. Both the Bucs and third-place Carolina...
ATLANTA, GA・1 HOUR AGO
Yardbarker

Wednesday, the St. Louis Cardinals added another weapon to their lineup, agreeing to terms with free agent catcher Willson Contreras on a five-year, $87.5 million contract. Contreras is expected to replace Yadier Molina behind the plate as the club's catcher. He could also see time at designated hitter. Here's a...
SAINT LOUIS, MO・22 HOURS AGO
Yardbarker

USC linebacker Ralen Goforth laid the potential hit of the year on Utah quarterback Cameron Rising in Friday night's Pac-12 title game. With 3:50 left in the third quarter, and Utah facing a 3rd-and-3 near midfield, Rising scrambled in search of the first down before being met by Goforth with a hit so thunderous it popped the quarterback's helmet into the air.
SALT LAKE CITY, UT・5 DAYS AGO
Yardbarker

On Monday night, the Boston Celtics defeated the Toronto Raptors 116-110 on the road in Canada. Blake Griffin came into the night only averaging 12.5 minutes of playing time per game, but he got the start and played 32 minutes. During the second quarter, the former first-overall pick had a...
BOSTON, MA・2 DAYS AGO
Yardbarker

Watson's first game in 23 months wasn't pretty, but the Browns still defeated the host Houston Texans on Sunday, 27-14. The 27-year-old went 12-for-22 for 131 passing yards, 0 touchdowns and one interception and added seven carries for 21 rushing yards. Cleveland won due to its defense and special teams,...
CLEVELAND, OH・22 MINUTES AGO
Yardbarker

It's high praise for the senior, but Murray knows a thing or two about playing quarterback at Georgia. Murray led the Bulldogs from 2010-2013, finishing his college career with the record for the most touchdown passes in SEC history with 121, which still stands. On Saturday night, Bennett had a...
ATHENS, GA・4 DAYS AGO
Yardbarker

2022 has been an abject failure for the Indianapolis Colts and it is clear the team is headed towards a rebuild. There are holes throughout the roster but perhaps the most important decision the Colts need to make will be the hiring of their new head coach. The Colts shockingly turned to Jeff Saturday as their interim coach but may look elsewhere for a long term solution. Let’s look at five potential candidates for the Colts head coach job in 2023.
INDIANAPOLIS, IN・2 DAYS AGO