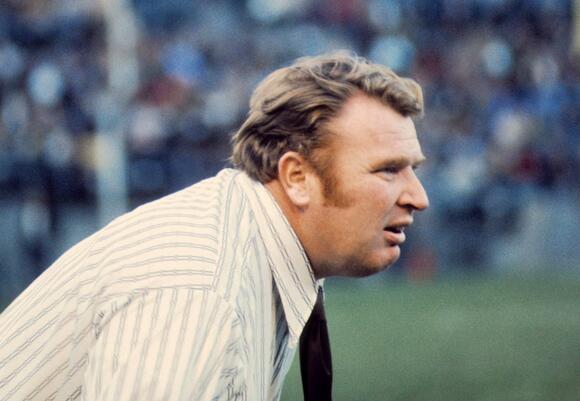 Former Husker and Raider quarterback Dave Humm recalled a short but sweet talk by Madden in a game against the Kansas City Chiefs.

John was being shown around by our athletic director, who introduced me to John. It was an honor to be able to say I shook his hand. His contributions to football and broadcasting are in a class of their own.

View the 3 images of this gallery on the original article

Years later after I started HuskerMax, I interviewed Dave Humm who was the quarterback at Nebraska from 1972 to 1974 and played for the Raiders when John was the coach. I recorded the interview, and below is a video of Dave talking about a halftime talk by Coach Madden.

Hope you enjoy it as much as I did. That's me laughing at the end.

Earlier this week, the football world and Hollywood lost a beloved figure when a former NFL player and actor passed away. Brad William Henke, who played professional football for the Denver Broncos, passed away on Thursday. Henke was just 56 years old. He started his football career at the University...
DENVER, CO・17 HOURS AGO
The Spun

Former NFL quarterback Michael Vick will be featured in an eight-part documentary series that details the evolution of the Black quarterback in America. Variety broke this exciting news on Wednesday. As part of this docuseries, Vick will speak with celebrities, coaches, quarterbacks, journalists and other cultural figures to get their...
2 DAYS AGO
AllHuskers

TCU (13-0) Ohio State (11-1) That would pit Georgia against Ohio State in one semifinal, with TCU against Michigan in another semifinal. Georgia and Michigan would likely be favored to win their respective games in the semifinals. Of course, that also sets up the possibility of Ohio State and Michigan...
COLUMBUS, OH・1 DAY AGO
The Spun

Former MLB All-Star Jason Castro has announced his retirement after 12 years in the Major League. The veteran catcher took to Twitter to break the news on Friday. Today, I officially announce my retirement from Major League Baseball. Over the last 15 years of pro ball, I have been blessed with many incredible opportunities and have met so many people along the way that helped me achieve more than I could have ever imagined.
1 DAY AGO
AllHuskers

The Grayson Rams and the Pebblebrook Falcons picked up wins on a special night for the annual Tournament of Champions Showcase hosted by the Wheeler Wildcats.
MARIETTA, GA・20 MINUTES AGO
New York Post

The Jets are making a fashion statement in a sign of love for their new quarterback. While traveling to Minnesota on Saturday, multiple Gang Green players were spotted rocking Mike White t-shirts. The 27-year-old quarterback will have his second start of the season on Sunday for a pivotal game against the Vikings. White showed up during first start last Sunday, igniting the Jets offense in a 31-10 win over the Bears. The quarterback threw for 315 yards and three touchdowns, a performance that morphed him into a fan favorite – and for his teammates’ to later wear shirts that say “Mike f’ng White.” “He was a smooth operator,” running back Ty Johnson said after the Bears win. “He was just doing Mike White things; you know what I’m saying?” White — a Jet since 2019 who started three games last season when Zach Wilson was injured — also has played behind Wilson this season before the former No. 2 overall picked was benched in Week 11. Saleh said Wilson eventually will play again, but for now, “it’s Mike White’s opportunity to take advantage of every last play he gets.”
MINNEAPOLIS, MN・2 HOURS AGO
BoilermakersCountry

Travis Justice and Dr. Rob Zatechka are joined by Vegas insider and professional handicapper Scott Spreitzer as they go Behind The Point Spread. Tonight they will take a closer look at the Power 5 college football conference championship games:. PAC-12: USC vs. Utah. ACC: Clemson vs. North Carolina. SEC: Georgia...
GEORGIA STATE・2 DAYS AGO