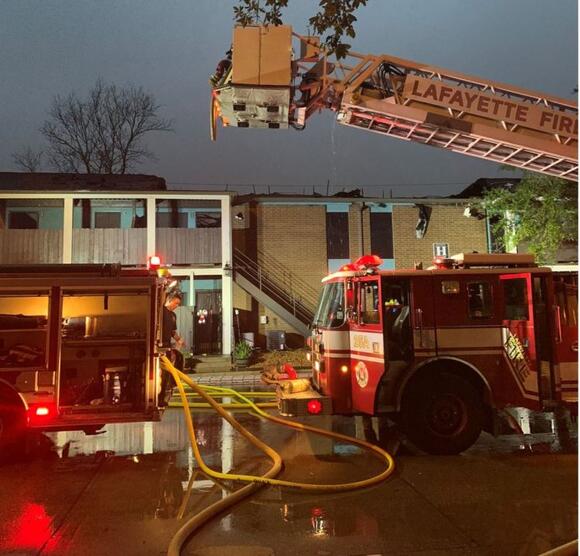 UPDATE: More than 70 people were displaced from their homes Thursday evening following an apartment fire in Lafayette.

No injuries were reported.

According to the Lafayette Fire Department, a preliminary investigation has determined that roofing contractors were working on the roof prior to noticing the smoke and called 911 to report the fire.

LAFAYETTE, La. (KLFY)– Lafayette firefighters are on the scene of a large apartment fire at Bayou Oaks Apartment homes on Feu Follet Road.

According to Spokesperson Alton Trahan, just before 4:00 pm the Lafayette Fire Department received a 911 call stating smoke was coming from the roof of one of the buildings at the complex.

He said first responders arrived on scene within minutes and noticed flames coming from the roof.

A second alarm was immediately requested resulting in 7 fire trucks and 3 aerial ladders, he said.

At least 35 firefighters are on scene working to combat the fire which involved 24 units.

He said the fire is under control at this time and there are no injuries.

The number of occupants affected by the fire is unknown at this time, however the American Red Cross has been contacted to assist with temporary housing, Trahan said.

A preliminary investigation has determined that roofing contractors were working on the roof prior to noticing the smoke and called 911 to report the fire.

For the latest news, weather, sports, and streaming video, head to KLFY.

Squatters were in and out of abandoned hotel in Lafayette where fire happened, officials said

they find a way to get inside the rooms
LAFAYETTE, LA・14 HOURS AGO
KLFY News 10

In Evangeline Parish, the police jury is expecting to bring relief to the community thanks to the merger of two fire districts.
EVANGELINE PARISH, LA・18 HOURS AGO
KLFY News 10

A Mexican restaurant in New Iberia has announced that they are permanently closed.
NEW IBERIA, LA・20 HOURS AGO
KLFY News 10

Arrest made in hit-and-run on Hwy 190

A Franklin man was arrested after urinating on emergency room nurses while they attempted treatment.
MONROE, LA・1 DAY AGO
KLFY News 10

Get your cans ready! KLFY FoodNet Food for Families Drive is back

The KLFY FoodNet Food for Families Drive is back yet again.
LAFAYETTE, LA・3 HOURS AGO
KLFY News 10

New restaurant in Lafayette set to open in December

A new neighborhood restaurant is set to open this month in the former Saint Street Inn on Brooke Ave.
LAFAYETTE, LA・1 DAY AGO
KLFY News 10

News 10 and Catholic Charities of Acadiana are back for our annual Food Net Food for Families Food Drive. This year will be year 36 of helping to feed families across Acadiana.
ACADIA PARISH, LA・19 HOURS AGO
KLFY News 10

The St. Landry Parish Sheriff's Office has arrested a Melville resident and charged them with inciting a felony connected to a shooting.
MELVILLE, LA・21 HOURS AGO
KLFY News 10

Beau Chêne High School was on brief lockdown due to a possible threat.
ARNAUDVILLE, LA・2 HOURS AGO
KLFY News 10

A new Santa Hotline offers children and parents the opportunity to call and leave a message for Santa Claus.
LAFAYETTE, LA・23 HOURS AGO
KLFY News 10

The Opelousas community came together in memory of their loved ones after they were killed in a double homicide this week.
OPELOUSAS, LA・2 DAYS AGO
KLFY News 10

Although wisdom often comes with age, the support senior citizens need may not.
LAFAYETTE, LA・4 HOURS AGO
KLFY News 10

Man shot in leg on Sunny Street in Lafayette

Man shot in leg on Sunny Street in Lafayette
LAFAYETTE, LA・4 DAYS AGO