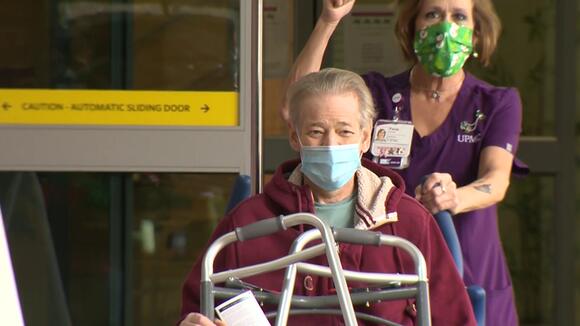 His close calls included being put on and off a ventilator twice. He spoke with Pittsburgh's Action News 4 as he was released and exited the hospital Thursday.

"I got a beautiful bride waiting for me at home, I want to get there," Bernheisel said.

What does this day mean to him?

While Bernheisel was fully vaccinated, he said he was on medication for a form of leukemia that had compromised his immune system.

He's grateful for the care, commitment, and professionalism of those who cared for him.

"Oh, I'm going to cry again. The hospital staff, from top to bottom, is just remarkable. I can't believe — they treated me like royalty. They were so kind, so patient, so effective. Each person did what they did remarkably well. it just blows my mind they've got all those people in one building," Bernheisel said.

His daughter, Melody Agate, said, "After nine weeks in the hospital, there's many times I didn't think we would see this day. And I am very thankful to God and all these wonderful staff."

Bernheisel recalled family, "Standing over me, being really kind and saying nice things. I found out, they're telling me I'm going to die. I didn't find that out until later. It's a good thing."

Last week, Bernheisel's family and friends gathered outside his hospital window on Christmas Eve to show their support.

"I looked out there, boy, that flipped my mind. It put me in a very fine place, to know that people care about me. And I got to see all seven grandkids, which was outstanding," he said.

Regarding vaccination, Bernheisel said he intends to get a booster shot as soon as doctors advise he can and that he's glad he got his first and second shots.

"I believe in personal choice, adults can make their own minds up. I'm glad I did it, I'd certainly do it again and I would encourage people to do it. I wouldn't have made it if I hadn't," Bernheisel said.

What is SAD is: Way Too Many People Have Been Brainwashed. This "pandemic" is all about power and control. Way too many people have put their trust into this power hungry agenda. Please stop with all this believing from those who don't care about anyone but themselves.