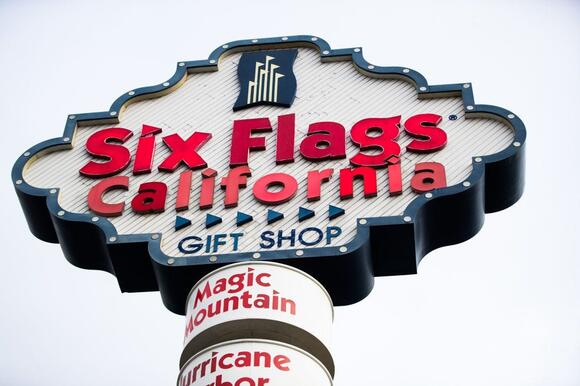 (KNX) — Winter weather shuttered the doors of two theme parks Thursday, in Valencia and Buena Park, Calif. For the second day in a row Six Flags Magic Mountain announced that, due to inclement weather, it would be closed.

The park previously issued the same message on Wednesday due to wintry conditions.

Following the park's announcement on twitter, several customers reached out to ask about reimbursements for Monday through Thursday tickets.

The park said to learn more about refunds and exchanges, contact vipsupport@sixflags.com with order information and a representative will be able to assist.

In a message to KNX, the theme park officials said they expect to open as scheduled on Friday.

Knott's Berry Farm
Buena Park's Knott's Berry Farm also announced it would close for the day after 1 p.m., citing weather as the primary reason. The park will however keep the California Marketplace , it's section for dining and gifts, open to visitors.

In a message to KNX, the theme park said guests can contact Guest Services team by calling or filling out a submission form online regarding eimbursement or ticket rescheduling.

A person was found dead Friday at the scene of a house fire in the Eagle Rock area. Firefighters sent to the 1400 block of West Hepner Avenue at 8:05 a.m. extinguished the flames in the single-story building in about a half-hour.
LOS ANGELES, CA・1 DAY AGO
KNX 1070 News Radio

Santa Ana winds are expected to dissipate Friday, but a red flag warning of critical fire conditions will remain in effect until 11 a.m. According to the National Weather Service, winds will taper off by late morning.
SANTA ANA, CA・8 DAYS AGO
KNX 1070 News Radio

Queen Mary to reopen by the end of the year

The Queen Mary is expected to partially open to the public at the end of this year after being closed for more than two years.
LONG BEACH, CA・4 DAYS AGO
KNX 1070 News Radio

A man was taken into custody today after climbing the exterior of a hotel in the downtown Los Angeles area. Authorities went to the 900 block of West Olympic Boulevard shortly before 9 a.m., according to the Los Angeles Police Department
LOS ANGELES, CA・4 DAYS AGO
KNX 1070 News Radio

L.A. rock band Guns N’ Roses sued an online gun store called Texas Guns and Roses for unspecified damages today, alleging in federal court that the seller is attempting to con consumers into believing that the website is associated with the band.
LOS ANGELES, CA・2 DAYS AGO
KNX 1070 News Radio

A Los Angeles City Council committee recommended today to move forward with a controversial plan to shift the Scattergood Generating Station, a power plant in Playa Del Rey, to be powered by green hydrogen instead of natural gas.
LOS ANGELES, CA・2 DAYS AGO
KNX 1070 News Radio

After public pushback, the L.A. County Metropolitan Transportation Authority will not increase the price to ride the bus or train.
LOS ANGELES, CA・9 DAYS AGO
KNX 1070 News Radio

Culver City measure allowing 16, 17-year-olds to vote comes down to the wire

In one of the tightest races in Los Angeles County, the fate of a Culver City measure, which would allow 16 and 17-year-olds to vote, hangs on by just a thread.
CULVER CITY, CA・2 DAYS AGO
KNX 1070 News Radio

The Los Angeles City Council approved a pay raise Tuesday for hundreds of workers at the Los Angeles Department of Water and Power. Ten bargaining units under the International Brotherhood of Electrical Workers will receive the new contract.
LOS ANGELES, CA・4 DAYS AGO