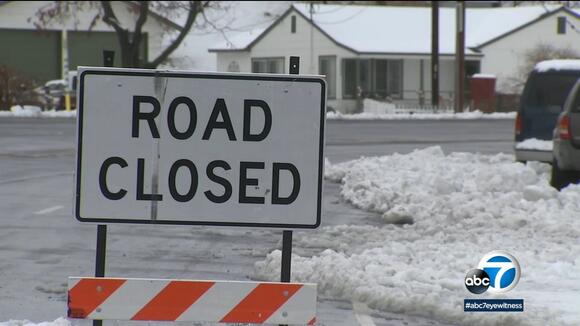 The 5 Freeway reopened in both directions over the Grapevine following an hours-long closure due to snow and ice Thursday. The CHP's Bakersfield office announced the shutdown shortly before 5:30 a.m. Caltrans announced lanes were reopened with California Highway Patrol escorts around 3:41 p.m. CHP later stopped escorting drivers, but advised the public to go below the 65-mph speed limit. The northbound side of the 5 was closed at Parker Road in Castaic, while the southbound side was closed at Grapevine Road. Just after 6:30 a.m., Caltrans said the so-called "snow gate" would be opened to allow northbound traffic to make a U-turn southbound. Highway 58 through Tehachapi was open and suggested as an alternate route. Malibu mud and rock slides forces closure of Highway 23 at PCH, Caltrans says

Mud and rock slides forced the closure of Highway 23 in Malibu, Caltrans said.

An image tweeted by the Highway Patrol at 7:22 a.m. appeared to show vehicles moving in a single lane on the freeway, but it was unclear what time the photo was taken and in which direction the vehicles were traveling. While frigid conditions gripped the Grapevine, other parts of Southern California were being soaked on Thursday. As of 10:30 a.m., the highest precipitation total in the region was at Cogswell Dam in the Bobcat burn scar area of the San Gabriel Mountains, where 7.08 inches of rain was recorded, according to the National Weather Service. In the San Gabriel Valley, Monrovia Canyon Park remained closed as a precaution due to fears of possible mudflows. K-rails remained in place near homes in the immediate area. "You just don't want anything to break and you don't want people to lose their houses if the mud slides off the mountainside there," said resident Nancy Tinker, who braved the rain to go for a jog. "Getting stuck in mud is not fun."

A cold front swooping down from the northwest into Southern California will bring less rain than previously forecasted, but some spots will still see some.
ORANGE COUNTY, CA・10 HOURS AGO
ABC7

The last three years have been the driest in California's history. Water agencies across the state are concerned about possible shortages for next year and beyond.
CALIFORNIA STATE・5 HOURS AGO
ABC7

A stranded hiker managed to survive on his own for two weeks in the Southern California wilderness until he was discovered by a couple on a camping trip nearby.
ANGELUS OAKS, CA・6 HOURS AGO
ABC7

The average price of a gallon of self-serve regular gasoline in Los Angeles County dropped for the 17th consecutive day, decreasing to its lowest amount since March 3.
ORANGE COUNTY, CA・4 DAYS AGO
ABC7

An Upland man was arrested after he allegedly beat his wife to death, left her on the side of a road and then abandoned his young daughter at a gas station.
UPLAND, CA・1 DAY AGO
ABC7

Rachel Castillo, a Simi Valley mother of two, was reported missing after her sister found a bloody scene at their home. Castillo's remains were later found in a remote location in the Antelope Valley.
SIMI VALLEY, CA・3 DAYS AGO
ABC7

A neighbor who called 911 to try to help a 15-year-old girl in Riverside describes witnessing the suspect with the young girl before her family's home erupted in flames.
RIVERSIDE, CA・3 DAYS AGO
ABC7

Lost your vaccine card and your digital record is wrong? Here's how to stay up to date

Many Californians have received three or four COVID boosters, but it can be hard to keep track - especially if you've misplaced or lost your vaccine card or your digital record is not up-to-date or difficult to retrieve.
CALIFORNIA STATE・2 DAYS AGO
ABC7

Union officials criticized the planned merger of Kroger and Albertsons in a deal worth nearly $25 billion.
2 DAYS AGO
ABC7

The president of the Fernandeño Tataviam Band of Mission Indians, a historic tribe of northern Los Angeles County, spoke with ABC7 on why Native sovereignty is multifaceted.
2 DAYS AGO