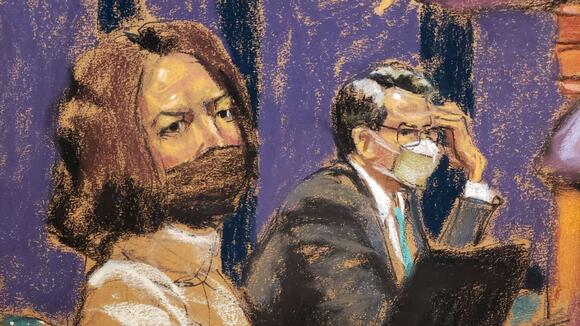 A jury has convicted Ghislaine Maxwell, the longtime associate of serial sex offender Jeffrey Epstein , on five of six counts related to the abuse and trafficking of underage girls.

Maxwell faced a six-count indictment for allegedly conspiring with and aiding Epstein in his sexual abuse of underage girls between 1994 and 2004.

She showed no visible emotion as the jury's verdict was read in the New York City courtroom. Following the verdict, her family members exited the courtroom without comment.

The verdict came on the sixth day of jury deliberations, after about 40 hours of deliberation.

"A unanimous jury has found Ghislaine Maxwell guilty of one of the worst crimes imaginable -- facilitating and participating in the sexual abuse of children," U.S. Attorney Damian Williams said in a statement following the verdict. "I want to commend the bravery of the girls -- now grown women -- who stepped out of the shadows and into the courtroom. Their courage and willingness to face their abuser made this case, and today's result, possible."

"This Office will always stand with victims, will always follow the facts wherever they lead, and will always fight to ensure that no one, no matter how powerful and well connected, is above the law," Williams added.

Epstein, the one-time millionaire financier, died by suicide in jail in 2019.

Prosecutors alleged that Maxwell played a "key role" in a multi-state sex trafficking scheme in which she allegedly "befriended" and later "enticed and groomed multiple minor girls to engage in sex acts with Epstein" and was also, at times, "present for and involved" in the abuse herself.

"We believe firmly in our sister's innocence -- we are very disappointed with the verdict," the Maxwell family said in a statement. "We have already started the appeal tonight and we believe that she will ultimately be vindicated."

Former U.S. Attorney Geoffrey Berman, who brought the original 2019 indictment against Epstein, told ABC News in his first public comment about the Maxwell case, "I congratulate the prosecution team for delivering justice for the victims."

"I am so relieved and grateful that the jury recognized the pattern of predatory behavior that Maxwell engaged in for years and found her guilty of these crimes," said Annie Farmer , one of three minor victims who testified against Maxwell. "I hope that this verdict brings solace to all who need it ... even those with great power and privilege will be held accountable when they sexually abuse and exploit the young."

"The jury's verdict vindicates the courage and commitment of our clients who stood up against all odds for many years to bring Jeffrey Epstein and Ghislaine Maxwell to justice," said attorney David Boies, who represented Farmer. However, said Boies, "They did not act, and could not have acted, alone. The scope and scale and duration of their sex trafficking crimes depended on many wealthy and powerful collaborators and co-conspirators. They too are not above the law. They too must be brought to justice."

MORE: The rise and fall of Jeffrey Epstein: A timeline of the financier's troubles

"Satisfaction with Maxwell’s conviction is tempered by the knowledge that other co-conspirators have yet to be held responsible for their involvement in Jeffrey Epstein’s extraordinary criminal enterprise," said attorney Jack Scarola, who represented the Maxwell accuser who testified under the name Carolyn. "Doors closed by Epstein’s death may be opened by the very strong motivation Maxwell now has to unlock every door to which she holds a key."

Maxwell has been held without bail since her arrest in July 2020. She now faces decades in prison.

A sentencing date has not yet been set.

Biden Accuser Tara Reade 'Will Not Be Silenced,' Would Testify Under Oath

The FBI warned Twitter during “weekly” meetings before the 2020 election to expect “hack-and-leak operations’’ by “state actors” involving Hunter Biden, and “likely” in October, according to a sworn declaration by Twitter’s former head of site integrity, Yoel Roth.  The warnings were so specific that Twitter immediately censored The Post’s scoop about Hunter Biden’s laptop on Oct. 14, 2020, citing its “hacked materials” policy, a move described on Saturday as “election interference” by Twitter’s new owner, Elon Musk.  The extraordinary revelation for the first time lays bare how the FBI was involved in pre-bunking the story of the laptop, which had been...
LOUISIANA STATE・35 MINUTES AGO