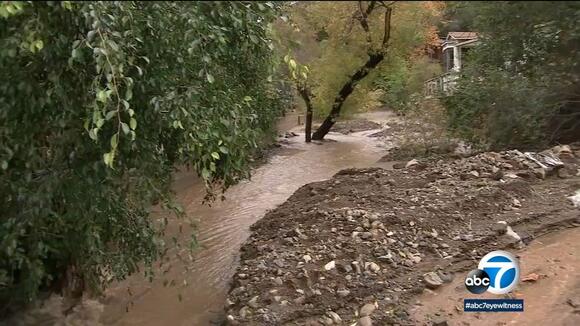 A mandatory evacuation order was downgraded to voluntary status Thursday for residents living in Orange County's Bond Fire burn area. The downgrade went into effect at 10 a.m. for residents living in the Silverado, Williams and Modjeska canyon areas. Even with the downgrade, officials still warned of possible debris flows near the burn scar area. Streets in the area that were closed overnight were reopened to local traffic only. A map with detailed depictions of the areas impacted by the voluntary evacuation can be found at www.ocsheriff.gov/bondfire . Last December, the Bond Fire kicked off a year of mudslides with each heavy downpour. On Thursday, the Santa Ana River was so swollen from the rain that it went flowing through River View Golf Course. Plus, Knott's Berry Farm was closed due to the wet weather. Though it certainly was a wet day across the O.C., the canyon communities thankfully dodged heavy rain. The same areas were subjected to mandatory evacuations during last week's storm, and residents have since been clearing up the remnants of damage, including downed trees and muddy roads. MORE | Rain triggers flooding at LA's Union Station

Thursday's rain created a watery mess at Union Station in Los Angeles - which remained open as travelers had to navigate streams of water.

This time around, residents were prepared for the worst, but the area didn't see any new major debris flows. However, the mess still remains. Canyon residents say the creek floor has gone up about 10 feet, and now they're concerned about who is responsible for clearing it up before the next storm rolls in. "The bigger issue we have is re-digging out the creeks behind me, re-digging out the main creek, which is 5, 6, 7 feet higher than it normally is, so that way the water, mud and dirt can kind of flow whenever we have rain. Otherwise, we're going to be dealing with this every time there's any sort of substantial rain," one resident said. Modjeska Canyon resident Marcus Lynch said earlier this month a 65-foot magnolia tree fell onto his home. With the consecutive storms, he says he hasn't had much of a chance to properly shield his home from the rain. "I couldn't start and I haven't started and I don't know when I'm going to be able to start," he said ahead of the incoming storm. A representative from the Orange County Public Works told Eyewitness News that the agency is restricted from doing any work on private roads, and it is only responsible for public roads to clear the way for traffic.

Rain in SoCal to ease up Tuesday, but chances increase for the weekend

The drizzly, cloudy weather is continuing in Southern California on Monday and through much of the upcoming week.
21 MINUTES AGO
ABC7

According to police, it is not known if he jumped or fell from a parking structure in Anaheim, but police believe he died by suicide.
10 HOURS AGO
ABC7

The attraction has been popular with families but has also been the subject of criticism from animal-rights activists.
1 DAY AGO
ABC7

CicLAvia returns to South Los Angeles; more than 7 miles of streets shut down to motorized vehicles

More than seven miles of streets in South Los Angeles are closed to vehicles for the year's final CicLAvia event.
1 DAY AGO
ABC7

Dog rescued after it was spotted being dragged by truck in Apple Valley, neighbors say

Residents in Apple Valley are outraged after a dog that was reportedly tied to a truck was dragged down a road.
23 HOURS AGO
ABC7

Video from the department shows recruits being welcomed back to cheers by members of numerous agencies from across Southern California.
2 DAYS AGO
ABC7

Video shows Mexican restaurant in Chatsworth getting ransacked by thieves

A beloved Mexican restaurant in Chatsworth was burglarized on Friday and according to police, it was one of several hit in the area by a group of thieves.
6 HOURS AGO
ABC7

A day after a coyote attacked and tried to drag away a little girl in front of her Woodland Hills home, wildlife officials were combing the neighborhood in search of the animal.
1 DAY AGO
ABC7

After the formality of a weekend swearing-in ceremony, Robert Luna on Monday officially assumed his duties as the 34th sheriff of Los Angeles County.
2 HOURS AGO
ABC7

One man was found dead and three others were hospitalized in connection with an overdose incident in Moreno Valley.
1 DAY AGO
ABC7

California reporting 'very high' flu activity, among the worst in US

California is now reporting what the Centers for Disease Control and Prevention describes as "very high" flu levels as cases surge nationwide.
4 HOURS AGO
ABC7

Body found on roadside in Santa Monica Mountains above Malibu

A body was found on a roadside in the Santa Monica Mountains north of Malibu, prompting the closure of Mulholland Highway, authorities said.
4 DAYS AGO
ABC7

A man led authorities on a high-speed chase through L.A. before he apparently tried to carjack passing drivers in a desperate attempt to escape capture.
3 DAYS AGO
ABC7

A man died and two women were hospitalized Friday after possibly ingesting fentanyl in a Moreno Valley hotel room.
2 DAYS AGO
ABC7

Corona police and firefighters hope the public can help them identify a pair of arsonists seen on dramatic surveillance video.
11 HOURS AGO
ABC7

A man died Monday after he was shot and then crashed into a parked pickup truck in a residential neighborhood in Azusa, authorities say.
50 MINUTES AGO
ABC7

A former employee of Mt. San Antonio College has been arrested for allegedly running down and killing a 63-year-old tram driver at the school, officials said Friday.
2 DAYS AGO
ABC7

Lindsey Horvath and Hilda Solis will take their oaths of office for the Los Angeles County Board of Supervisors Monday.
1 HOUR AGO