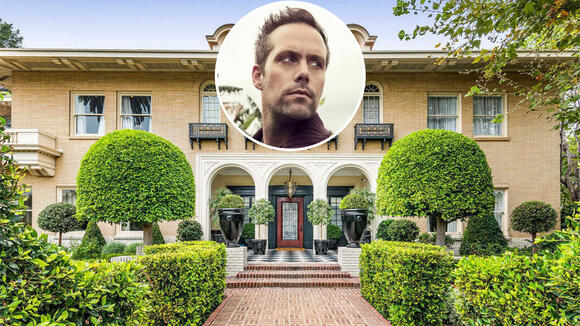 Grammy-nominated songwriter Justin Tranter has purchased a century-old estate in L.A.’s Windsor Square neighborhood. Records reveal Tranter paid entrepreneur Pasquale Rotella nearly $10.3 million for the property, originally listed over a year ago for $12 million. Rotella — who happens to be “Girls Next Door” star Holly Madison’s ex-husband — picked up the place in 2018 for $8.7 million; he subsequently reimagined it with a so-called “Roaring 20s meets Great Gatsby” vibe.

After fronting the New York City rock group Semi Precious Weapons, Tranter turned to songwriting and went on to co-write some of the biggest pop hits of the past few years, including Justin Bieber’s diamond-certified “Sorry,” Halsey’s “Bad at Love,” Selena Gomez’s “Bad Liar,” Imagine Dragon’s “Believer” and DNCE’s “Cake by the Ocean.” The 41-year-old Chicago native has also collaborated with the likes of Camila Cabello, Gwen Stefani, Demi Lovato, Ariana Grade and The Jonas Brothers.

As for Tranter’s new home, it was originally built way back in 1914 for banking executive Milton Getz and designed by the noted architect team Hunt & Burns . The four-story structure has since been extensively remodeled, complete with nine bedrooms and an equal number of baths sprawled across nearly 12,000 square feet. The ornate living spaces are adorned with hand-painted wallpaper, art deco-inspired light fixtures and elaborate crown molding. A plethora of custom gold mirrors and artwork double as TVs, and there’s also a three-car garage topped by a separate guest house.

Nestled securely behind gates on over a half-acre, the residence is mostly hidden from the street by hedge-covered walls. A walkway leads past a manicured front yard and spills into a portico entryway with black-and-white tile floors. Once inside, a double-height foyer displays a round sofa and impressive carpeted staircase. From there, a gold-hued formal living room resembling a grand hotel lobby has a fireplace, and a formal chandelier-topped dining room features built-in speakers and original pocket doors for added privacy.

Other main-level highlights include a game room decked out with old-school arcade games, a billiard table and French doors opening to the backyard, plus a gourmet kitchen outfitted with high-end appliances, custom shaker cabinetry, marble countertops and a split-level eat-in island. Upstairs, a sumptuous master retreat sports a sitting area with mini-bar. There also are dual spa-like baths — one with a barber’s chair and steam shower, and the other featuring a soaking tub clad in stainless steel, dressing area and hand-blown glass chandelier. An eclectically wallpapered family room also occupies this level.

Especially standing out on the lower entertaining level is a sexy speakeasy-style bar boasting a cigar lounge and mirrored wet bar, along with a gym and plush movie theater hosting a DJ booth. The amenities continue outdoors, where the flat grassy grounds are dotted with mature trees and herb gardens, and hold an al fresco dining terrace next to an outdoor kitchen with a built-in barbecue and a lounge area with fire-pit. A pool and spa has a fireside cabana on one side and stylish water feature on the other, while the aforementioned guest house comes with its own kitchen.

Tranter recently signed with Range Media Partners, which has several film and TV projects in the works. Among them: a musical titled “Wild” that will be directed by Diane Paulus, written by V (formerly Eve Ensler) and star Idina Menzel. Tranter reportedly maintains two other properties in L.A., including a $1.6 million West Hollywood bungalow and a renovated Craftsman-style home on the Eastside of Los Angeles.

Jon Grauman of The Agency served as the listing agent; the buyer was repped by Tyler Jacobs of Sotheby’s International Realty.